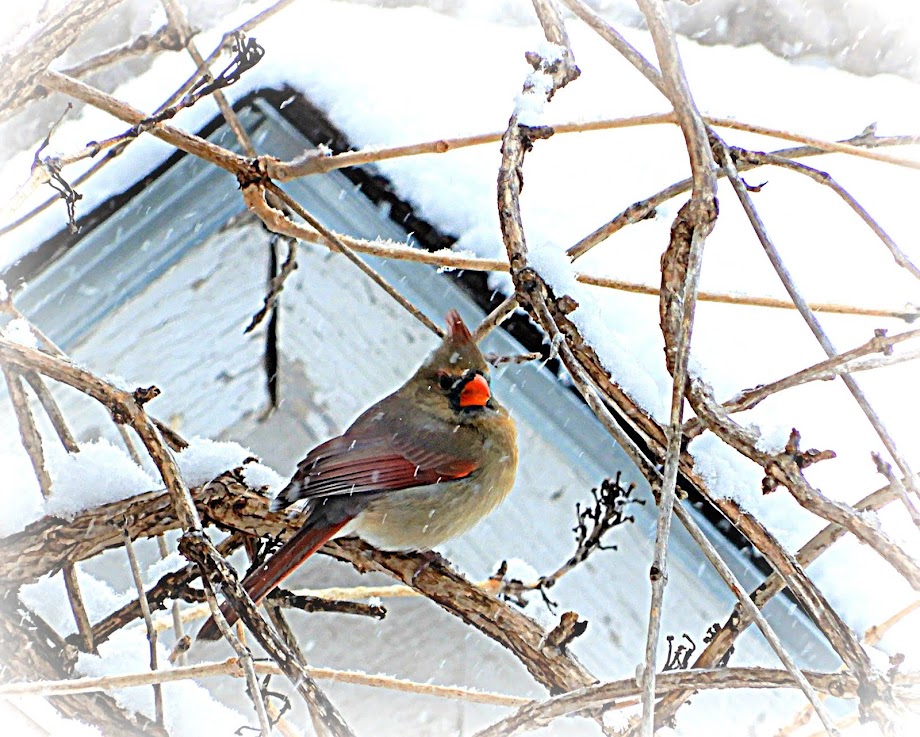 Hay! Here's an Conundrum for You! 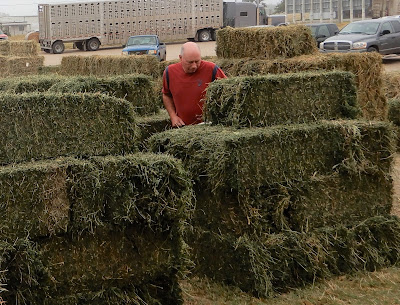 It's kind of an oxymoron: We raise alfalfa, so you'd think that going to a hay sale to purchase, rather than sell, is counterintuitive.

However, that's just where we found ourselves a couple of weeks ago.  I went with Randy to buy some small bales at the Central Livestock hay auction.
Most Tuesdays throughout the summer, the hay auction takes place outside the South Hutchinson sale barn before the sale ring opens for cattle later in the morning. 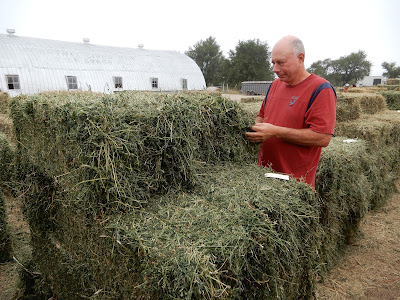 We got there early to look over the selection brought to the auction by those who had bales to sell.

So why would we need to buy hay when we raise hay? In fact, we grow alfalfa and sudan, both of which we bind up in big round bales and feed to our cattle. Randy was bidding on small square bales of hay to use as "bait hay." (That's an oxymoron, too: The "square" bales are actually rectangular. Hmmm - That's what they're called anyway.) 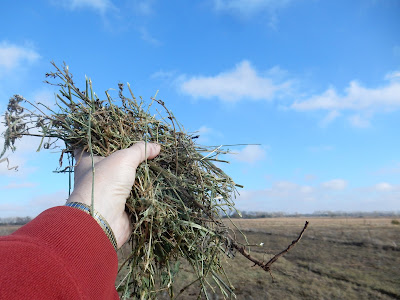 The small bales come in handy for my role in calling cattle into the corrals to bring them home from summer pastures or to entice them to change locations during the winter. It's a little tough to toss those 1,500-pound big round bales, don't you think? A 60-pound bale works better. (And let's get real: I'm not tossing the whole bale myself either. I end up pulling chunks from the bale for enticement purposes.) 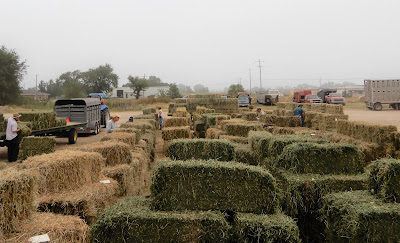 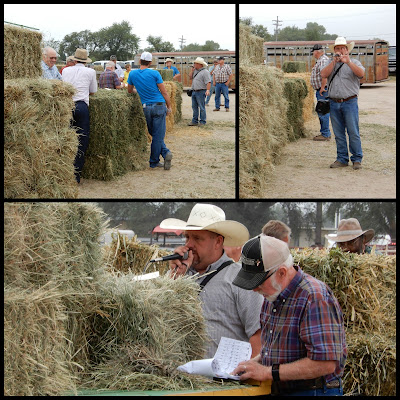 Who knew there'd be such a crowd? There were preschoolers there with their Daddies and plaid-shirted farmers. There were cowboy hats and seed company caps. The variety didn't end with the people. There was brome hay. There was alfalfa. There was millet hay. There were small bales, big square bales and a couple of big round bales. 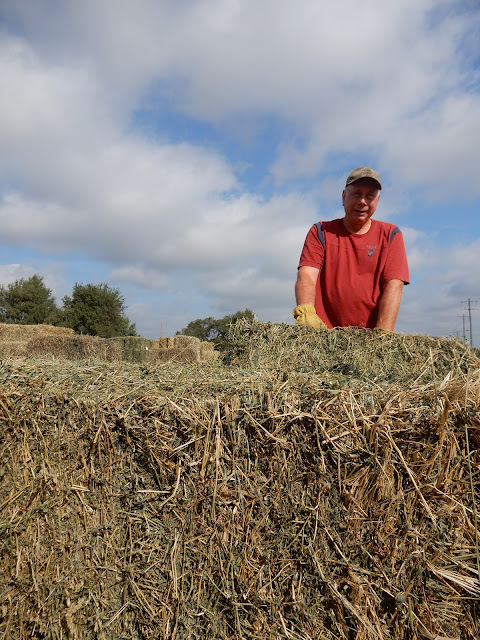 I may sometimes toss some hay into the air for calling the cattle, but I leave the whole bale tossing to my favorite farmer. He's been doing that since junior high days. Growing alfalfa has always been part of the crop rotation for Randy's family. 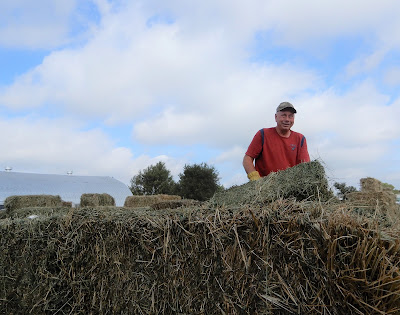 Back when Randy was a child, they used a sickle mower which laid the hay flat. Then, they would rake the hay. Since they didn't own a baler, a neighbor would bale it into square bales. Then, Randy, his brother and dad would pick up the hay from the field. 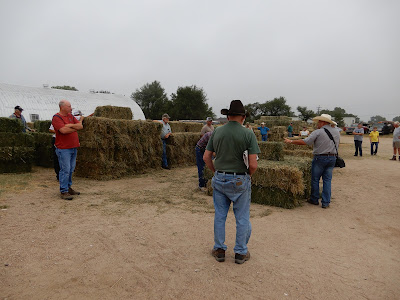 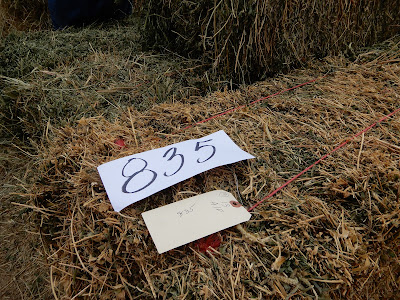 These days, he isn't bucking bales in a whole field. As auction bidder No. 835, he raised his hand and purchased two different piles of alfalfa hay, totaling 34 bales. Besides looking for quality hay, he chose a couple of piles closest to the driveway for easier loading. Always thinking, my farmer! I'm always thinking, too. I occupied myself with paying for the hay and then taking photos. I could say I forgot my gloves. But, honestly, Randy didn't ask me to help and I didn't volunteer. 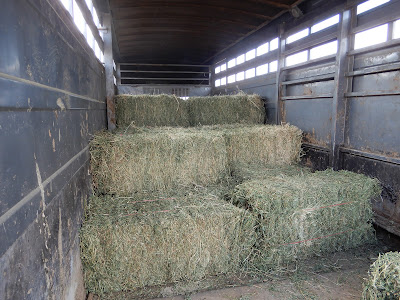 Once we got home, he reversed the process and unloaded the hay in a storage shed. A couple of kittens who'd been hiding out in the few remaining bales of hay we purchased a couple of years ago had to be momentarily relocated to the wheelbarrow. 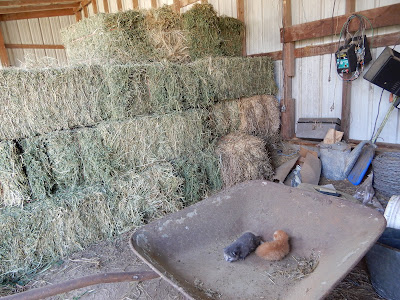 The kittens were returned to their hay "condominium." 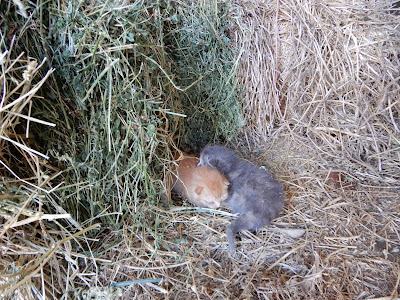 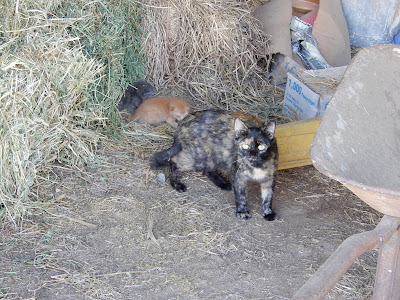 However, the mother didn't like the human interference and moved them.

Our neighbor borrowed a few bales for a homecoming float. And now we're ready for those cattle-gathering expeditions this fall.
Posted by Kim at 8:08 AM