In these days of sexual harassment claims, I probably should have gotten this heifer's permission to post her personal "business" all over the internet. 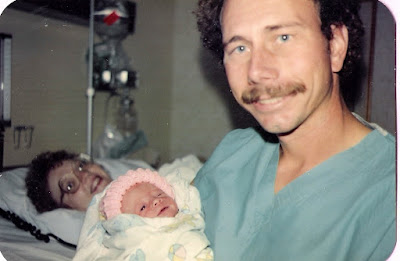 Goodness knows, I didn't want video cameras or even still cameras documenting the birth of my offspring until the action was over. And even then, I let the Lamaze coach and the guest of honor be the focus of the star's first-ever photo shoot.

However, I guess it's in No. 885's "contract" for room, board and plenty of food that the Chief County Line Correspondent gets to have exclusive coverage of her baby's birth story.

The heifers - including No. 885 - are in a corral to the east of our house. That makes it easier for Randy to check them more frequently and gives us easy access to the calving shed. Because they are first-time mothers, Randy checks the heifers throughout the day and night, just in case one is having difficulty.

With the heifers, Randy uses a bull for "calving ease" - a bull whose progeny is lower birth weight but which gains well after birth. Most of the time, the heifers calve naturally, but, once in awhile, they need a little help.

No. 885 had been showing awhile, and after an hour, Randy didn't see any further progression. We ran her into the calving shed to pull the calf, something we do to help both the mama and the baby. 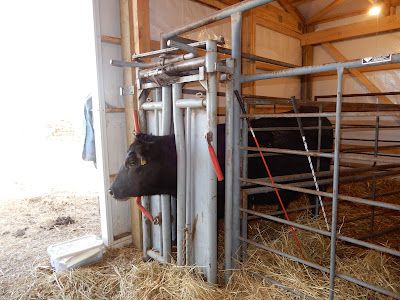 We put the heifer in the head gate, my Christmas gift of 2010. Sometimes cows can be riled up with the birthing process, so having them contained in the head gate is a much safer option for both mama and people. She set her feet and didn't want to go into the head gate. But, once we finally got her situated, she was very calm. 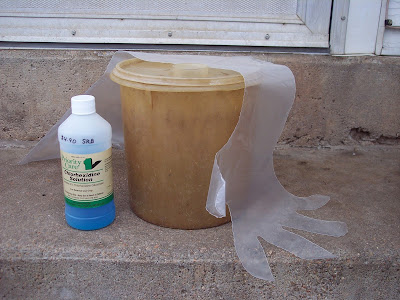 Randy first splashed disinfectant on the heifer to try to keep the birthing canal as clean as possible. (We've been using the same Tupperware bucket for this job since Randy's folks were in the cow-calf business. It was part of our inheritance.) Just like on Grey's Anatomy or Chicago Med, Randy gloved up for the procedure. 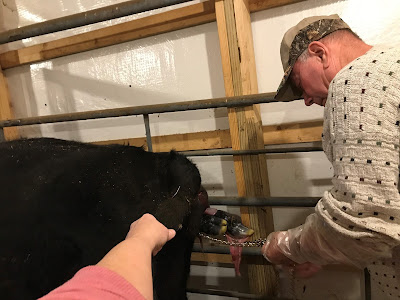 I should have done the same, but my work gloves were in the house, and I wasn't all "up in her business," as I might euphemistically describe. It would have just been more sanitary for me. Randy tied a chain above the ankle on each of the front hooves of the calf. Then he tied the two chains together.

Randy attached the chains to a calf puller, which is a long rod with a pulley on the end. (Since I was helping, I used the photo below from another year.) 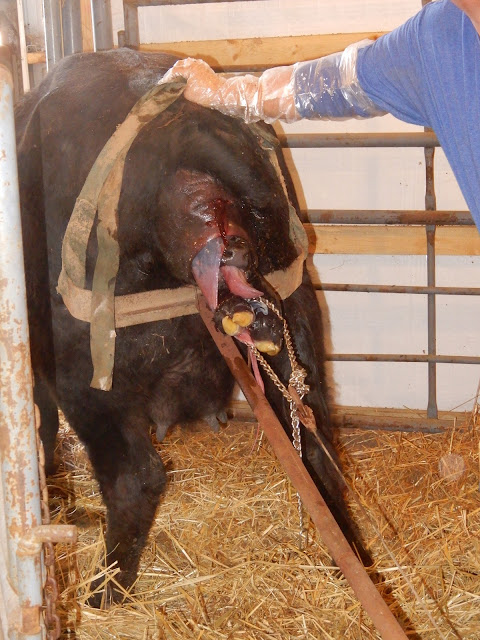 Randy put the leather strap of the calf puller on the cow's rear end, and I held it in place to get started. 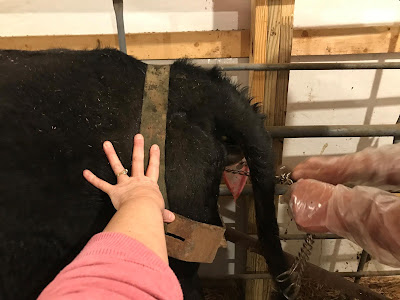 Then Randy used the pulley system to gently pull the calf from the mama's womb, sometimes pausing to wait for another contraction. The baby comes out with the front feet and the head first.

Welcome to the world, baby! 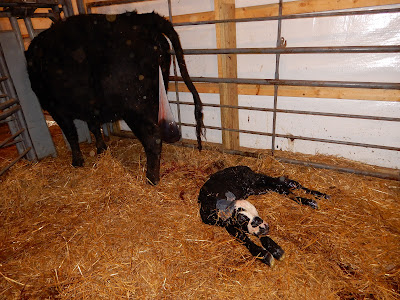 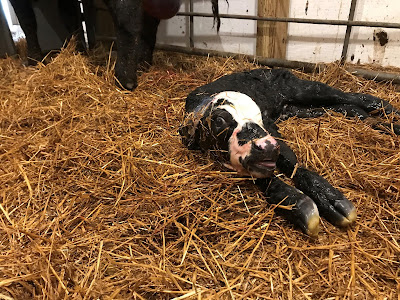 The mama still had part of the birth sac hanging immediately after birth. Many times, it bursts as the calf is delivered, but not in this case. However, just like with a human birth, the mama then delivers the after-birth. 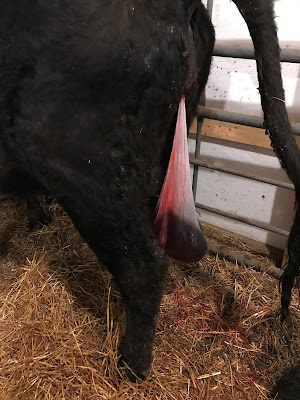 Mama gets the job of cleaning off the baby by licking it. It's part of the bonding process for the pair.

We left the two alone in the calving shed to get to know each other. 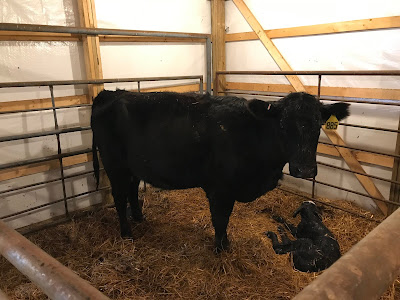 In 2012, I wrote "The Miracle of Birth," which showed photos of the guys pulling a baby calf. Click here to read that post and see the photos. (Since I was just an observer instead of a helper, you can probably see the equipment used better in that post.)

And, while the farm is full of miracles like this birth, this life also encompasses the other end of the spectrum. We did our best to help this baby whose mama didn't accept it. We thought we'd successfully grafted it to another mama. But it died over the weekend. RIP, little 003. 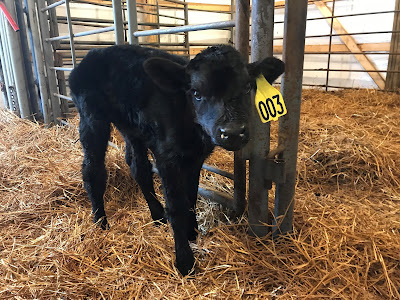