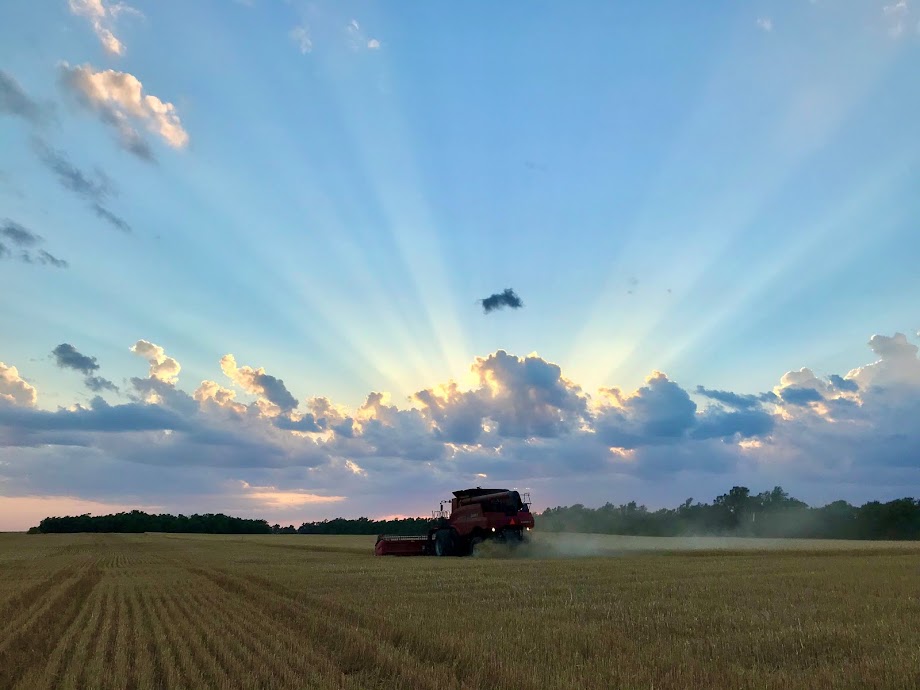 A Different Perspective: Wheat Harvest from Above 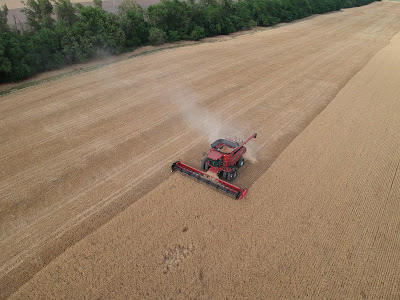 All the drone photos and videos were taken June 18, 2020, by our neighbor Mark Pike. Thanks to Mark for this different look at our 2020 harvest! He gave me permission to use these on the blog today. 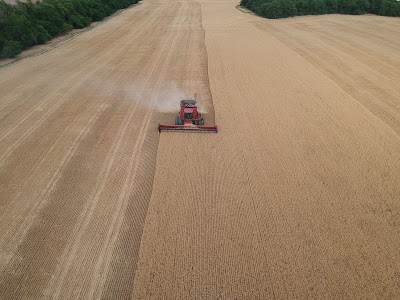 My "need" was prompted by the photos and videos our neighbor, Mark Pike, shot by drone of us cutting wheat across from his house last Thursday evening. 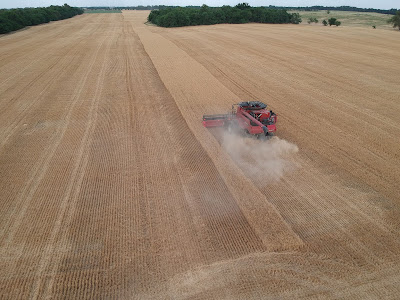 I told Mark the same thing. He volunteered to let me come down and try his new toy "any time." But then, I started thinking about that.

He (and my kids) are of the video game generation. Joy sticks, electronics and such are second nature to them. 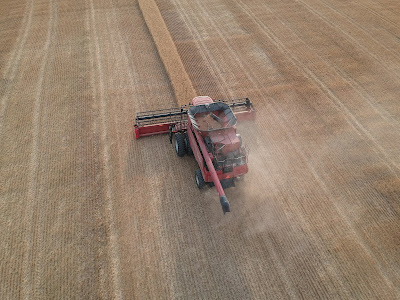 I, on the other hand, was my parents' "remote control" for the television back in the 1960s and '70s. There was no "clicker" to mindlessly glide through dozens of television stations. In fact, there were only three TV stations. It was a big deal when we added PBS as a 4th station beaming to our rural Pratt County farm home.

And I - or one of my other siblings - was the garage door opener. There was no clicking a button as you turned into the farm drive. It was child labor that heave-hoed the door up after a trip to town. 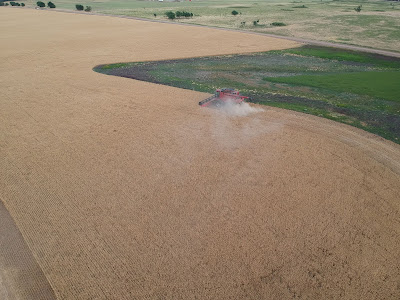 So I was imagining the damage I could do to Mark's new toy if I took him up on the offer to try it out ... and then promptly crashed it. Hmmmm - maybe not. 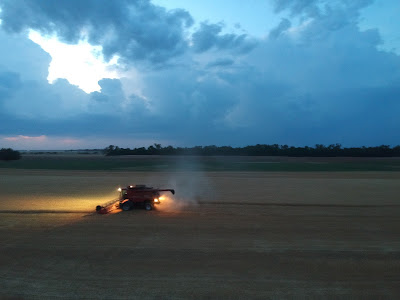 But the images were sure fun to see. Mark lamented that he'd tried - and failed - to capture the lightning that was flashing through the sky before a storm blew through. I lamented with him, telling him that it's not easy to achieve with still photography either - at least, by this amateur. 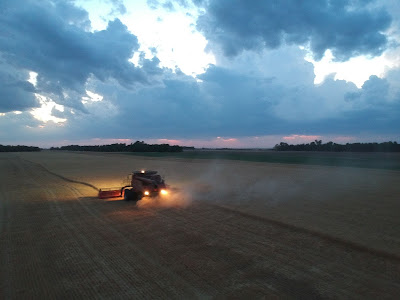 But his maiden journeys with the drone provided a different perspective than my dozens of photos taken on the ground the same night. (See Tuesday's blog, Beauty and the Beast, for those.) 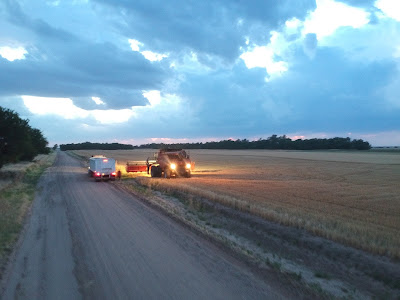 Perspective - It's an interesting concept, isn't it? I've been reading a book this week called "The Council of Dads: My Daughters, My Illness and the Men Who Could Be Me," by Bruce Feiler. A new NBC television show has been airing this summer called "Council of Dads," and I noticed in the credits that it was based on a book by Feiler. I signed up for it, and it was delivered on one of my trips to the Hutchinson Public Library parking lot.

In Feiler's real-life story, he chooses six of his friends who represent different parts of his life and could best speak to the different facets of his being. These friends were to fill the gaps for his young daughters in the event that Feiler would lose his battle with bone cancer. (The TV show has three men assembled for the same purpose, but it doesn't appear that the TV drama storyline has much in common with Feiler himself.) 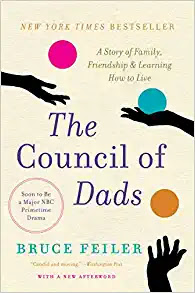 One of the dad's in the book - the second Ben - says he would share this quote from Rainer Maria Rilke with the twin girls:


Have patience with everything unresolved in your heart. Try to love the questions themselves. Do not seek the answers now, because you would not be able to live them. And the point is to live everything. Live the questions.

It seems kind of like looking at things from different perspectives - maybe comparing the drone's photo angles to those taken by still camera on the ground. We're both seeing and photographing the "same" thing, but the perspective changes.

My view of sunset changes if I'm looking ... 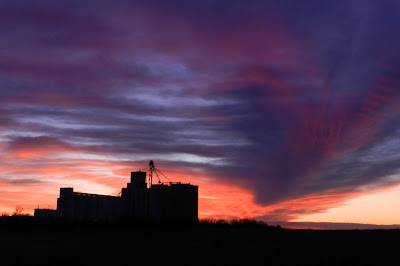 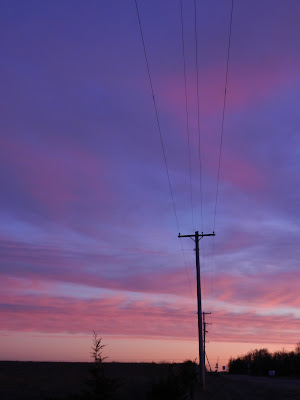 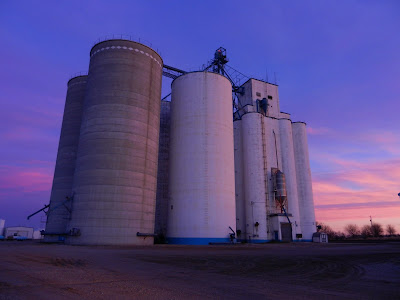 I suppose it's because we are all colored by our experiences. We are affected by the direction in which we are looking and the direction from which we've come. Are we stuck looking at past slights and failures or do we look toward the future? What wins out? Is it the memories of the schoolyard taunts or is it the compliment for a job well done? 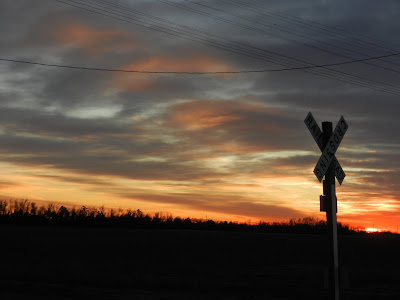 Perhaps it's a reminder to stop and think. Will we be colored by the positive? Or will the negative win the day? It truly is a matter of perspective, isn't it?

It's kind of like the parable of the six blind men with the elephant, who touch the beast in different places and come up with wildly different impressions because of what they "see."

It seems to me that our world could benefit from a look at different perspectives. No matter which side of the political aisle my friends claim, I would suggest there's some validity in at least listening to another's point of view ... whether it's politics, race or even whether someone plans to wear a mask in public or not.

I loved this quote from "The Council of Dads:"


Confidence comes from the questions. I would tell the girls to live their questions. Throw themselves passionately into the quest for new perspectives, just like their father, who would go anywhere in search of answers to his questions. ...

What I love about the Council of Dads is that if your girls are too young to hear your voice, you can surround them with voices that will, in the totality of symphony, create sounds of their father. No specific instrument does it. Sherwood's drum may be beating too loudly, or maybe Black's or Stier's will screw things up. But Linda (Feiler's wife) will conduct the orchestra in such a way that the girls will hear enough music for you to be always present.

Ben Sherwood from "The Council of Dads"

Who knew thinking about drones and still cameras might be deeper than whether to fork over some money for a new toy?

Maybe our world could heal - at least a little bit - if we all were passionately on the quest for new perspectives. Worth a try?

***
By the way, I highly recommend the book. It is beautifully written.


Drone videos are by Mark Pike, Stafford. (It's on my Vimeo Account, so it says Kim Fritzemeier)