I probably learned as much as a 4-H parent as I did as a 4-Her. Until Jill started experimenting with pies for fair baking, I was more likely to use a Pillsbury refrigerated pie crust than make my own.

It's not as if I didn't have some pie baking in my background. Both my grandmothers were good pie bakers. My Grandma Neelly's green apple pie was my favorite summer time pie. My Grandma Leonard's pumpkin pie was my fall pastry of choice.

When Jill started baking pies for the county fair, I learned right along with her. First step was finding a good pie crust recipe. After several false starts, I called my sister, Lisa, who was already proficient at pie baking.

Her Never Fail Pie Crust recipe lives up to the name.

Purchasing a pastry cloth was another step in making pie baking easier. I don't usually use the "stockinet" that came with it on my rolling pin. But rolling out the pie dough on a lightly-floured pastry cloth instead of on a counter or between sheets of waxed paper has definitely streamlined the process for me. It was worth the investment of a few dollars for a pastry cloth.

Still, I don't make pie as often as my husband would like. With the lower price of blueberries in the grocery store, it was time to fulfill my promise to my husband that he would get his favorite pie.

A blueberry pie is super easy, compared to making an apple pie and having to peel, core and slice all the fruit. It's also easier than a peach pie, when you have to blanch the fruit to remove the peels and then slice.

So, here's my version of Blueberry Pie:

Heat oven to 425 degrees. Prepare pastry. Mix sugar, flour and cinnamon. Combine blueberries and lemon juice. Add dry mixture to blueberries and toss lightly. Pour blueberry mixture into pastry-lined pie plate. Dot with margarine or butter. Cover with top crust that has slits cut into it (or use a small cookie cutter to make a design.) Seal and flute the crust.

Cover edge with foil shields. Bake until crust is brown and juice begins to bubble through slits in crust, 35 to 45 minutes, depending on your oven.

Stir together flour and salt. Cut in shortening with a pastry blender until well blended. Stir together water, vinegar and beaten egg. Add to flour mixture. Stir with a fork until a dough starts to form and pulls away from the side of the bowl. You may need to use your hands to help form it into a ball. Divide into thirds, as this recipe makes 3 crusts (enough for a 2-crusted pie and one single crust. I usually just put the extra crust in the freezer to use later for a one-crust pie.)

STEP BY STEP - A Photo Essay for Homemade Pie 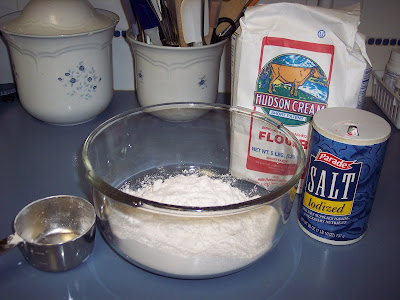 Combine the dry ingredients for the pie dough (flour and salt). Note: I use Hudson Cream flour in all my baking. It has been milled at the Stafford County Flour Mills in Hudson for the past 106 years. 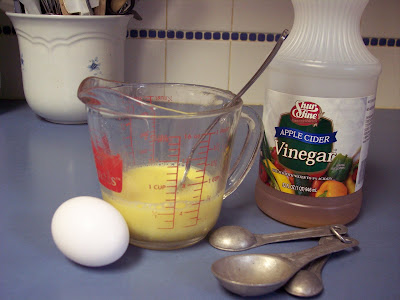 Combine the wet ingredients for the pie dough (beaten egg, water and vinegar).

Cut in the shortening with a pastry blender ... 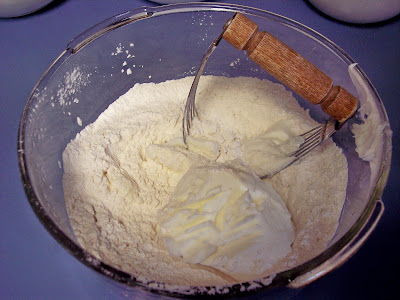 ... until shortening is well distributed. 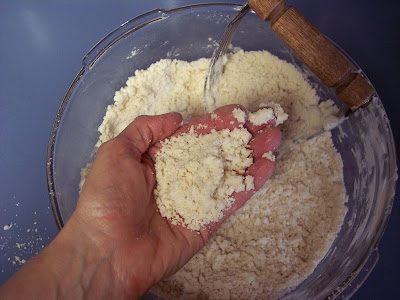 Add the wet ingredients and stir with a fork. As the two combine, the dough will start to pull away from the sides of the bowl. 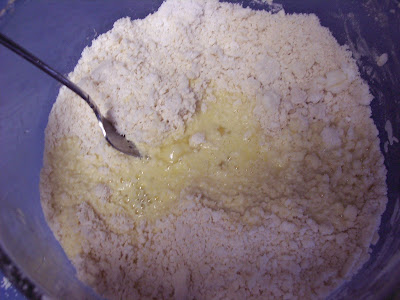 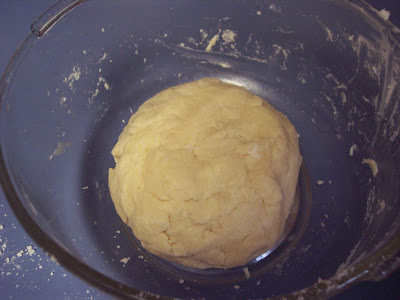 Put a one-third ball of the dough on a flour-dusted pastry cloth and press down to form a circle. Using a floured rolling pin, keep rolling in different directions to retain the round shape. 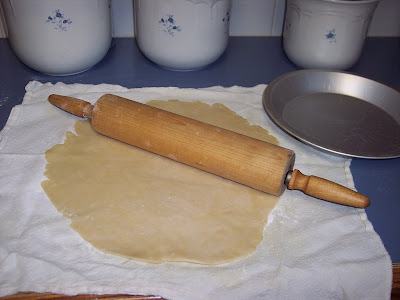 Roll out the pie crust dough until it is about 2 inches larger than the inverted pie pan. 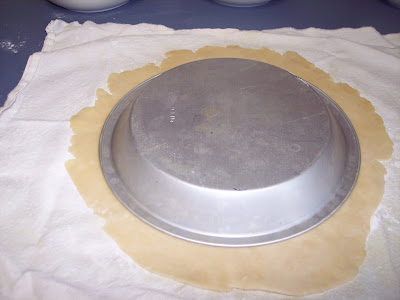 Fold the pie crust into quarters. 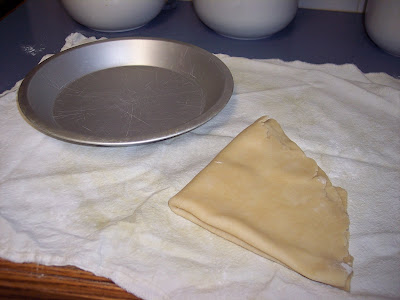 Put the dough into the pie plate and unfold to cover the pie tin. 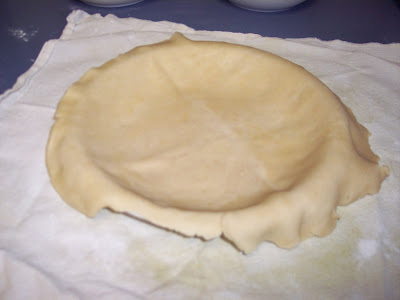 Put the blueberry mixture into the bottom crust. 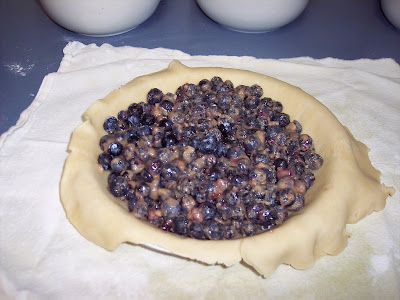 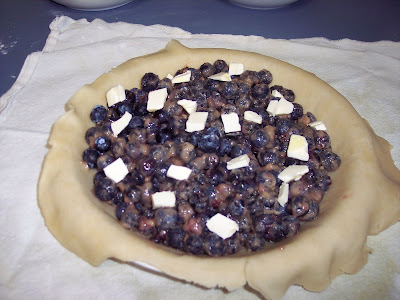 Roll out the top crust, using the same procedure as before. Put on top of blueberries. 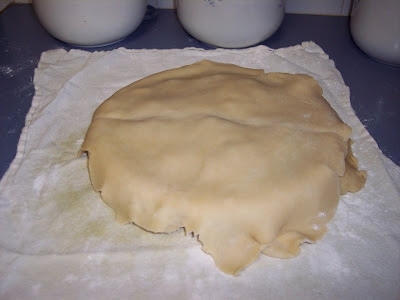 Trim overhanging edge of pastry 1 inches from rim of plate. Fold and roll top edge under lower edge, pressing on rim to seal. The judge at the Hudson Cream Flour Bakeoff suggested putting ice cold water on the bottom crust to make a seal between the top and bottom crust - kind of like glue. 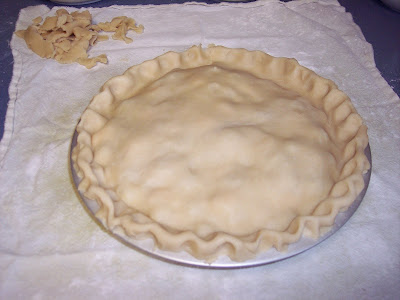 Using a mini cookie cutter, remove a portion of the top crust so the pie is vented. (Some people just cut slits in the top crust. That is fine, too. I've seen people make slits that look like a wheat stalk. I'm just not that artistic!) 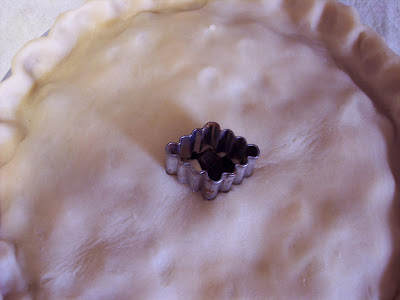 Use foil pie shields to cover your pie crust. This prevents overbrowning. 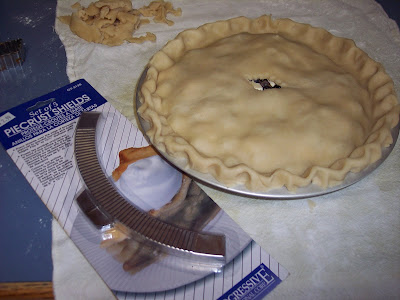 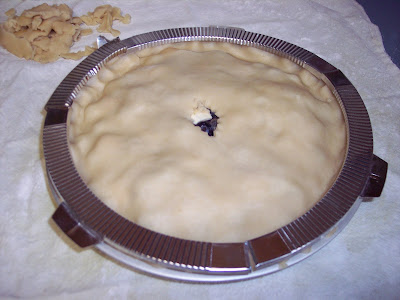 I have tried a circular, metal pie shield, but they never seem to fit the pan correctly.

Bake as directed, until crust is golden brown and filling starts to bubble, about 35 to 45 minutes, depending upon your oven. Remove from oven and put on wire rack to cool. 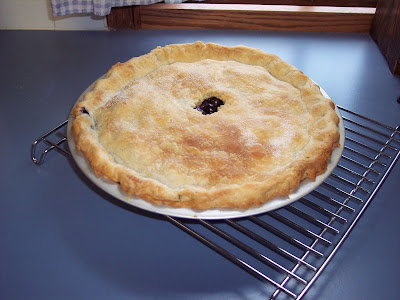 Once the pie is fairly cool, it's ready to serve. (You can serve it hot, but the filling won't hold together as well). Top with ice cream, if desired. Enjoy! 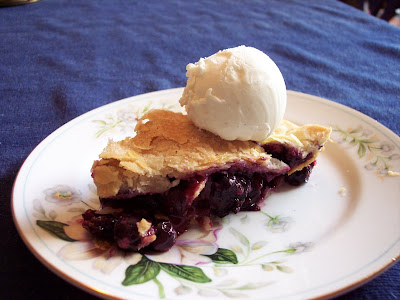 ****
Because you've trimmed the extra pie dough from the edges of your pan, you can use the excess for a cinnamon-sugar topped treat. 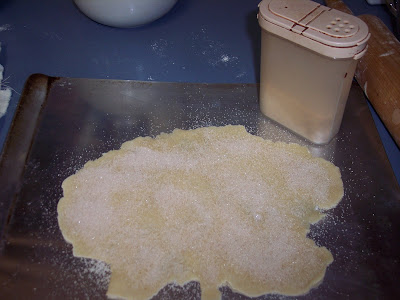 Just roll out the leftover dough and put on a baking sheet. Sprinkle with cinnamon sugar.

This is one of my favorite memories of baking with my Grandma Neelly. We even had a miniature rolling pin that we could use to roll out the extra dough.

Just bake until the crust is golden brown. 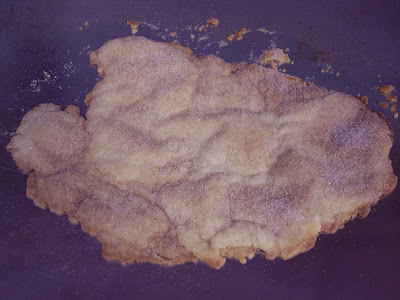 Break into pieces and enjoy (if you can do it without thinking about the calories)!
Posted by Kim at 8:00 AM