Whooping cranes stopped by for an impromptu visit March 25. The neighbor's wheat field was the rest stop of choice for two of the cranes. My little camera can't handle that distance, though I gave it the old college try. With a little creative cropping and enlarging, I got a few mediocre images.

Randy has become quite compliant with my requests to hold still and smile for yet another photo. Kinley and Brooke have also grown used to Grandma's constant need for them to pose for the camera and flash their smiles. The whooping cranes evidently didn't get the same memo.

Even though I advanced toward them slowly and stayed in the car, they still kept ambling their way a little further away from the road. Still, I got a few recognizable snapshots.

The Whooping Crane is the tallest North American bird at 5 feet tall and has a 7- to 8-foot wing spread. Adults are white with black wing tips and a red face. Young cranes may be whitish gray with rusty wash color on their head and neck and scattered reddish brown feathers over their back and sides, according to the National Wildlife Service.

We live only a couple of miles from Quivira National Wildlife Refuge. Whooping cranes have been spotted there, too. I'm not sure whether these are the same group or a separate one. 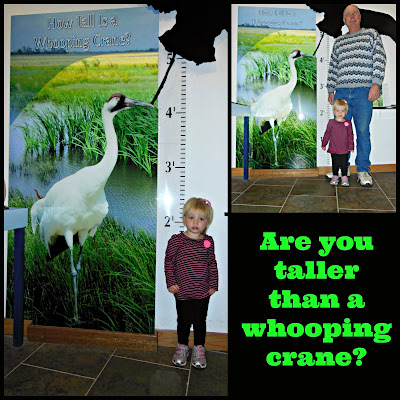 I made this collage from photos taken at Quivira's Education Center in 2013. Kinley and Grandpa were my models at the time.

Whooping Cranes are regular spring and fall transients through our part of Kansas, generally passing through the marked corridor in March-April and October-November. 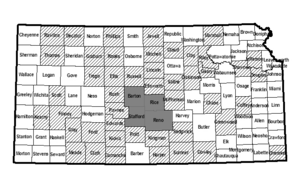 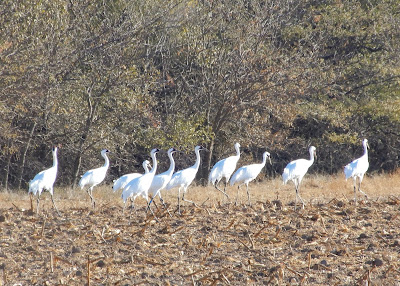 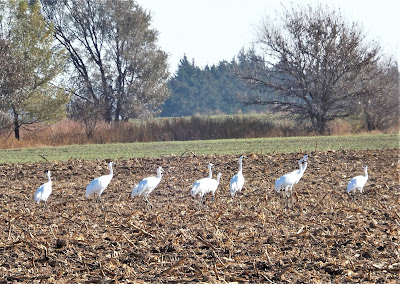 For the past several years, we had the visitors on some of our farm ground or nearby. Whether I get the "model worthy" photo or not, it's still a thrill to see them on their migration journey. 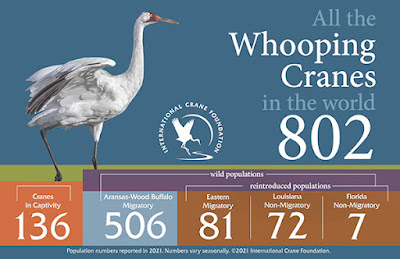 Two distinct migratory populations summer in northwestern Canada and central Wisconsin and winter along the Gulf Coast of Texas and the southeastern United States, respectively. Those are the cranes that travel through our area. 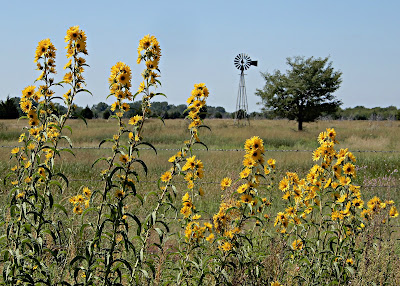 It started with a camera click on the way to a pasture on a September afternoon and ended up on the wall of an art museum. 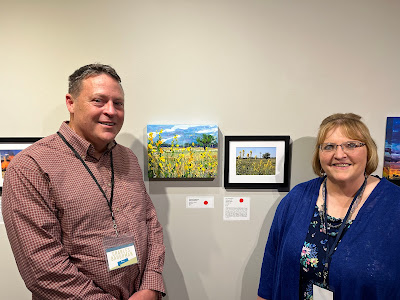 As an amateur photographer, I am honored that one of my photos was chosen by Artist Charles Baughman for an exhibit at the Vernon Filley Art Museum in Pratt. I am certainly not alone: 23 other photographers also had images chosen by Baughman. He recreated the photographs as paintings in his signature style, which he calls Splatterscape. He uses only his fingers, sticks and oil paint to produce abstract works. In the exhibition at the Filley Museum, his paintings hang side-by-side with the original photographs they are based upon. 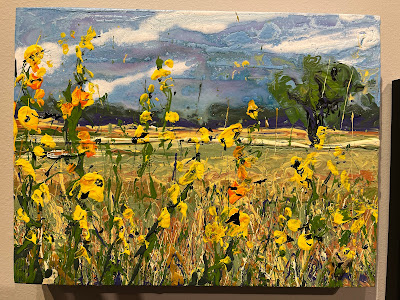 Earlier in the year, the museum advertised the opportunity for photographers to submit up to three photographs to be considered. (Thanks to my friend, Nancy, for bringing it to my attention.) The artist didn't want photos with animals, people or structures. It's tough to try and second-guess what might appeal to another person. I submitted three photos and just hoped for the best.

But I was really excited when I received notification that one of my photos was chosen. Baughman chose my photo of Maximillian sunflowers with a windmill in the background, though he opted to leave out the windmill in the finished painting. Those late-season sunflowers lined the road to the Rattlesnake Pasture. On a September day in 2018 when the sunflowers seemed to rival the sun, I stopped and took a few photos. I used the photo on my blog, of course, and it decorates my own mantel during sunflower season.

Last Friday, photographers were invited to be there with the artist for the opening reception. But the exhibit will be in place until July 22, so, if you're in the area, there's plenty of time to see it.

Charles Baughman is a nationally known, contemporary Abstract Expressionist painter, as well as a long-time art educator. He received his Bachelor’s degree in Studio Arts and Art History from Kearney (Neb.) State College and his Master of Fine Arts in Painting/Sculpture from Wichita State University. Since 2004, Baughman has owned and operated the Monart School of Art and The Art Park in Wichita with his wife, Kate Pepper.

"I'm happy to say that I'm a professional finger painter," Baughman said, generating a laugh among the crowd. "I'm open to happy accidents, which lead the viewer's eye on a journey."

A time-lapse video showed the process Baughman used to use paint interpret the photographs into paintings. This snippet features my photo.

Baughman told reception attendees that his  style of painting brings him closer to nature and celebrates all stages and seasons.

""Nature has a continuous process of destruction and rebirth," Baughman said in his artist statement. "Nature's rebirth often happens in unexpected ways - big events like earthquakes, tornadoes, hurricanes and fire. This destruction is always followed by new life - fresh, yet subtle, growth starts among grasses, trees and undergrowth first. Then, as the seasons cycle through, more and more regeneration happens. ... The spirit of life happens with the willingness to destroy and re-create something new." 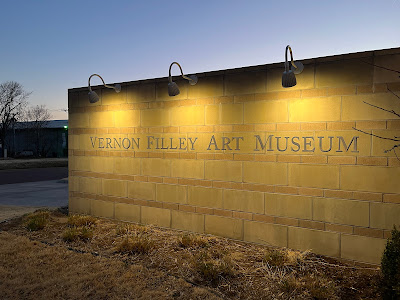 With the Ninnescah Landscapes exhibit, he wasn't trying to replicate the photography. The cell phones in everyone's pocket make it possible to capture moments easily. He wanted to interpret the photos in a new and interesting way. And with his paintings he wants to remind people that nature is powerful, yet its beauty is also fragile.

That message definitely resonates with me, someone who often captures the fleeting moments of beauty that exist all around me in my everyday life.

The artist statement I submitted with my photographs was this (in part):

The Kansas plains have always provided a backdrop for my life. Those scenes may not garner the same praise as towering mountains or waves hitting a seashore. In fact, Kansas is known as a “flyover state.” But these simple scenes are just as beautiful in a different way.

I’ve always enjoyed photography. As a fifth grader on a family trip to California, I took dozens of black and white photos of the Tournament of Roses parade. It became a bit of a family joke – dozens of black and white photos of scenes that were bursting with color! But that first experience of viewing the world through my very own camera lens served as a catalyst to a lifelong hobby....

Baughman doesn't believe in signing his name in the lower righthand corner of his work. Instead, he embeds a heart-shaped rock in the paint, and he signs the side of the work. 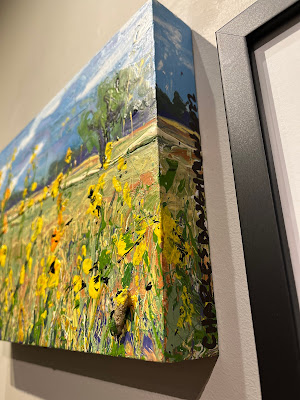 My photo and Baughman's rendition are also featured on the banner advertising the show outside the Filley. It was an additional thrill to see that! 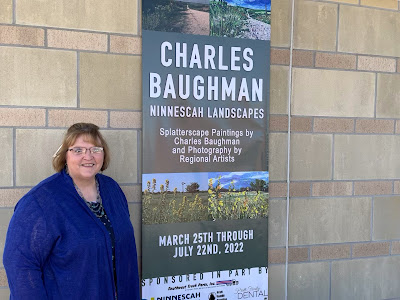 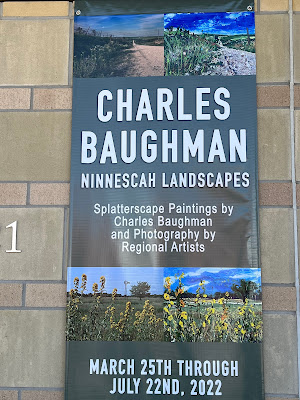 This isn't my first time to have my photos on walls other than my own or my family's. Some of my work is also featured at the Kansas State University College of Business and K-State's Staley School of Leadership Studies.

But it's no less an honor.

And the pair was sold the first night! That was a thrill, too!

Again, the exhibit will be on display at the Vernon Filley Art Museum in Pratt until July 22. Check it out!