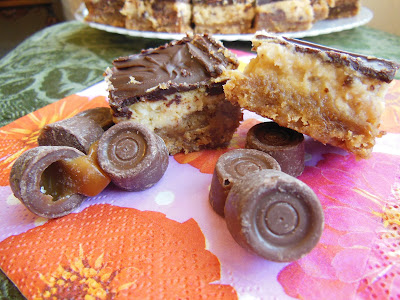 One of my friends said my Rolo Cheesecake Bars didn't look like a "Kim creation." I'm not sure what that means. (Maybe I should have added the caramel drizzle in the original recipe instead of taking the easier way out.) She was drifting from round table to round table, searching for the person who brought the bars to our church's Youth Sunday potluck, and I was glad to claim them.


I've made them a couple of times before, and both times, I've missed getting a decent photo of them. This time, I tried again. I'm not sure a photo does these buttery-crusted bars justice. You kind of have to give them a taste test. They have a layer of caramel-flavored cream cheese which is amped up with bite-size Rolo candies. Then, just for good measure, the bars are topped with a decadent chocolate layer. 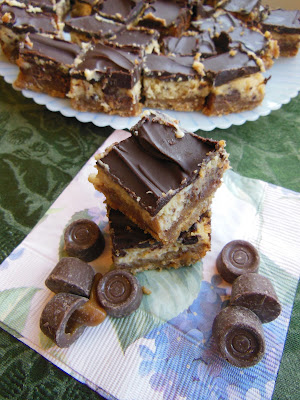 The hardest part of serving these bars is getting them cut. The Rolos - while delicious - are difficult to cut through. (Maybe if I wasn't such a rebel and refused to put the layer of foil in the bottom of the baking pan I would have had better luck. There's your tip for the day.)

I cut the bars fairly small for serving at the potluck, where everyone wants to try just a little bit of several different things. They could be cut into bigger pieces and served as a dessert for a PEO group or ladies' luncheon (not that the guys wouldn't like them, too)! If served in a dessert serving, you could make them even prettier with a piped rosette of whipped cream and drizzled with chocolate or caramel sauce (or both, if you're feeling especially adventurous), and topped with an extra mini Rolo, Big or small - enjoy! 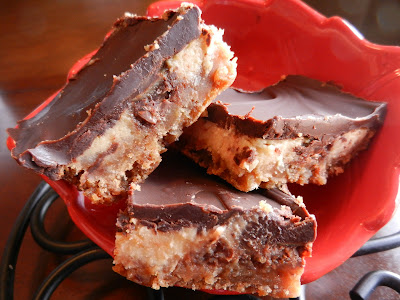 Cover inside of 13- by 9-inch pan with enough foil for a 1-inch overhang on all sides. Cover foil with baking spray. (I didn't do this step any of the times I've made this recipe. It probably would make cutting them easier - a word to the wise.) Heat oven to 350 degrees.


Place graham cracker crumbs and sugar in a bowl and toss to combine. Add in melted butter and mix to combine. Press mixture onto bottom of prepared pan. Bake at 350 degrees for 7-10 minutes. Remove from oven and set aside to cool while making cheesecake portion.

Place cheesecake, caramel sauce, sugar, egg and vanilla extract in a bowl and beat until fully combined and smooth. Add in Rolos and fold to combine. Pour mixture over crust and bake for 30-35 minutes at 350 degrees. Remove from oven and set aside to cool.

Combine chocolate, corn syrup and butter in a microwave-safe bowl. Heat in the microwave at 50 percent power, stirring after each minute, taking care not to burn. Continue until the chocolate is melted. Pour chocolate over baked cheesecake after it's cooled. Chill until chocolate is set. Cut with a big knife.

The original recipe used additional caramel for the top. You can check out how they look with that toothpick detail at Bakers Royale, where I got one version of this recipe. I didn't do this step. However, if you'd like to make them even more decadent, here's how:

Place caramel in a plastic bag and pipe straight lines horizontally across. Use a toothpick and starting at the top drag the toothpick vertically through horizontal lines. Draw second line with toothpick start in the opposite direction (from the bottom of the pan) and drag it vertically from bottom to top of pan. Continue to alternate starting points for the vertical lines drawn with the toothpick.

This weekend, I ended up seeing a different recipe on Facebook for a 13- by 9-inch pan and used a variation of both recipes to come up with the final product.

In the Facebook version, the cook added a chocolate drizzle and half a Rolo on top of each serving. I didn't do either of those things, but it would definitely dress them up if you wanted to cut the cheesecake bars into dessert-sized servings.

***
I'm linked today to Ashley's What's In Your Kitchen Wednesday? Head on over and check out all the yummy food shared by food bloggers from across the country!