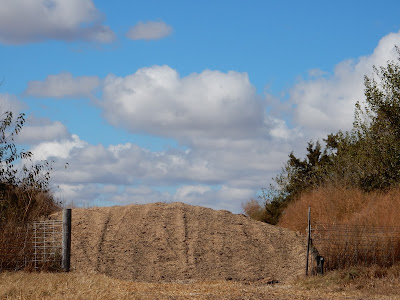 Have you noticed the squirrels running around collecting their provisions for the winter? I've read that squirrels began gathering food earlier this year to prepare for a long, cold winter. The Farmers' Almanac also predicts a cold and snowy winter for many parts of the country. (The almanac map shows "freezing cold and average snowfall" for us.) Of course, it's a little hard to believe that on October 31 when the temperatures are supposed to be in the 80s later today. But then again, it's Kansas, so there's no point trying to predict the weather.

But, just like the squirrels, we've been packing away provisions for the winter. It's not for us. It's for our cows.

A couple of weeks ago, a custom crew came to harvest our silage crop. Rains early in the summer made for tall stalks. 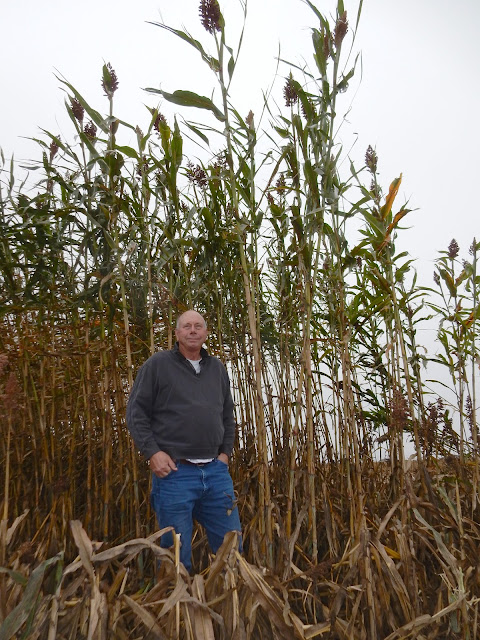 However, Randy was disappointed in how little grain was in the heads of the silage. The rains quit about the time the grain was supposed to be filling the heads. 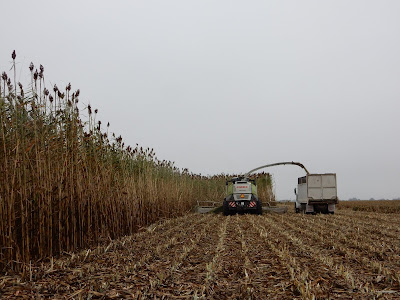 The crew arrived on an overcast day. It didn't rain, but it was gloomy (which didn't make for the best photos). 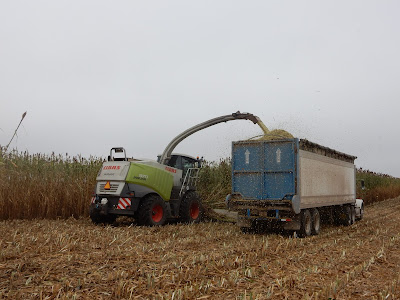 With the tall stalks, it didn't take long to fill the trucks with the chopped silage. 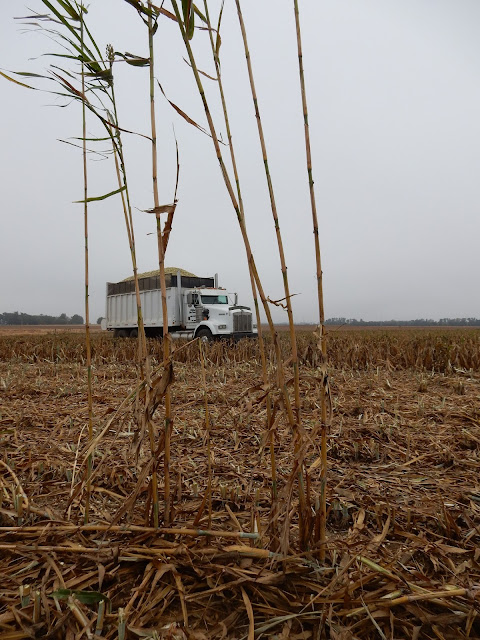 The three truck drivers were meeting themselves coming and going, and the cutter operator still had some downtime waiting for them to get back from dumping at the silo. 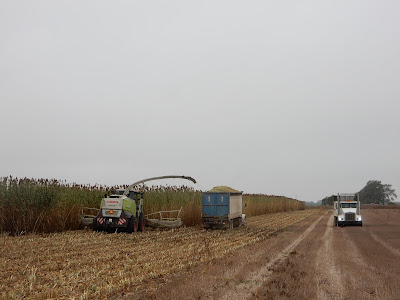 The silage (or forage sorghum) we grow is dual purpose: It has both grain and forage (or roughage), both of which are important to the cattle's diets as TDN - total digestible nutrients.

Silage cutting is another one of those choreographed farm "dances." The silage feeds into the cutter and is chopped. An auger carries the chopped silage into the truck. 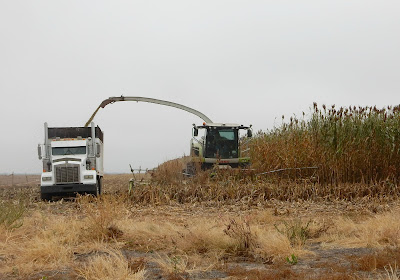 All this happens "on the go," with the truck and the cutter continuing in sync through the field until they get to the end of the rows.
They then move into position for the next swath down the field. Or, if the truck is full, it begins its short trip to the trench silo. 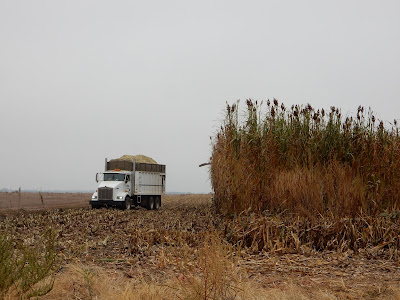 By design, Randy plants the silage in fields fairly close to the silo so that it doesn't have to be trucked so far. 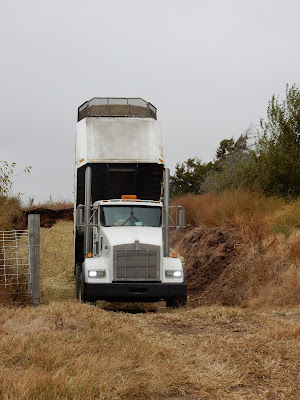 Once at the silo, the truck dumps its load.

Then it's back to the field for another load on the go. In the meantime, a tractor driver packs down the silage. 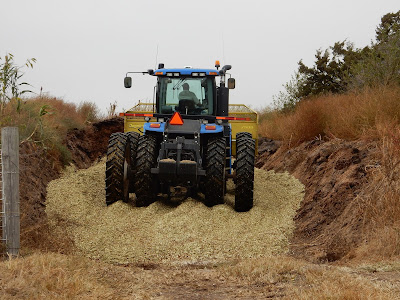 Packing allows more to be put into the "pantry," so to speak, and it helps the fermenting process. Once in the silo, the silage goes through an "ensiling" process. It goes through chemical changes, and the heat builds up. It raises the pH of the silage so that it doesn't spoil or ferment any longer. The top 6 inches of it will rot, then it forms an airtight seal, protecting the silage underneath.

After we bring the cows and calves off the summer pastures, the guys will start feeding the silage to the cattle. The mama cows will get the silage as is. For the feeder calves, the guys will add about 3 to 4 pounds of vitamin- and mineral-enriched grain per head, since they need the additional energy to grow to get ready for market.

It's good to get another harvest crossed off the books ... and to see the cattle's "pantry" full and ready for Old Man Winter. 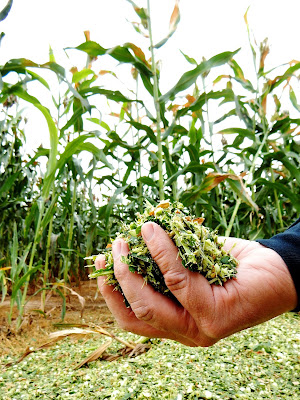 Today, we're going to bring the first group of cows and calves back home from summer pasture. We know the cold and snow will arrive soon enough - even if it's not on this 80-degree day. But with plentiful rains early in the summer and the newly-filled silo, they'll have plenty to eat - even if the Farmers' Almanac is right and it's a cold winter!