Sunflower from The Sunflower State 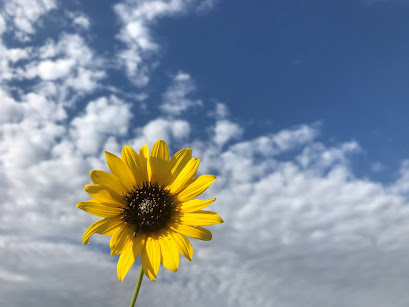 "She's a sunflower from the Sunflower State."
I am indeed.
If you were an elementary schoolchild in Kansas back in the 1960s, you likely learned that song by Mack David. It's one of those songs that's imprinted in my brain. Of course, I sometimes can't remember why I walked in a room, but I remember song lyrics from 50 years ago. (Go figure):

I was born in Kansas, I was bred in Kansas
And when I get married, I'll be wed in Kansas.
There's a true blue gal who promised she would wait,
She's a sunflower from the sunflower state.

There are more verses, but they weren't absorbed in my memory bank like the first verse and chorus. When my mom was cleaning out music (and more) at her house, she unearthed her "Sunflower" sheet music. Her maiden name was carefully penned on the upper righthand corner. It was before my own clean-out began, and I ended up bringing it home, along with some other music.

I framed it, using it to decorate my mantel this August, along with other sunflower "stuff." 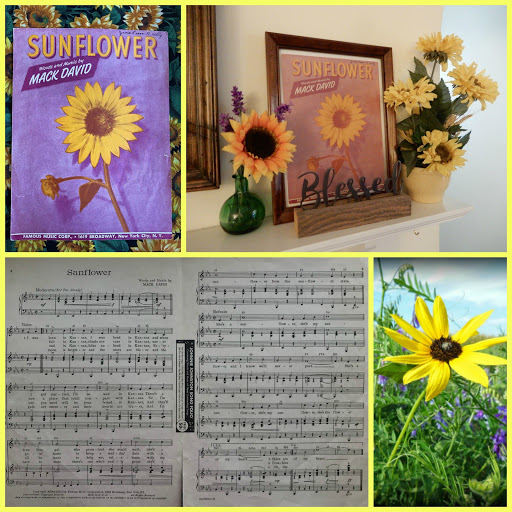 The music has a MCMXLVIII copyright. (To save you the trouble of Googling the Roman numeral translation, it's 1948. You're welcome!)

I didn't realize Frank Sinatra had a version until I was looking on Youtube.

Here's Frank Sinatra's version (ignore any ads before it. I don't have control over that.)
I've taken a whole bouquet of sunflower photos through the years. But this summer, one of them caught the attention of a writer in Texas who was looking for a photo to illustrate an article he was writing. 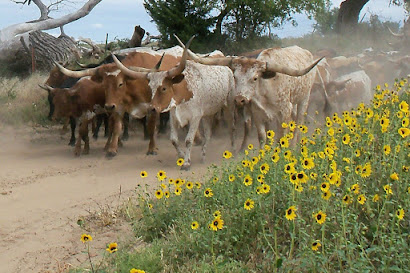 In the email, Col. Edward (Eddie) Boxx asked if he could use one of my photos featuring longhorns and sunflowers. I took it in 2011 as the Kansas Cattle Drive came through our area in honor of Kansas' 150th birthday. (Click here for the blog post. Also here.) 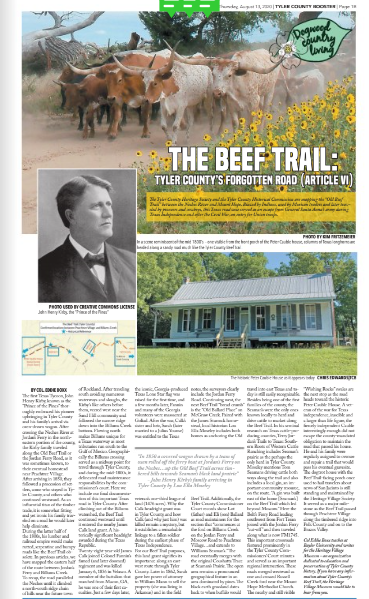 He wrote an article for the Heritage Village Museum in Tyler County, Texas, about the Old Beef Trail, and he recently sent me a screen shot to show how the photo was used.

Even though he was using it to illustrate the great cattle drives in the Plains, it made me think about all the sunflower photos I've taken in the years since I began my blog (and before that, too, I'm sure). 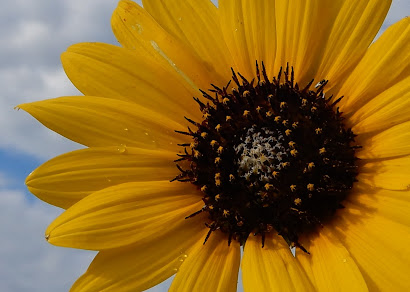 Summertime is sunflower time in Kansas. And even though our Iowa friends may believe it's a noxious weed, it's our noxious weed, thank you very much (with apologies to my son-in-law's Iowa family). 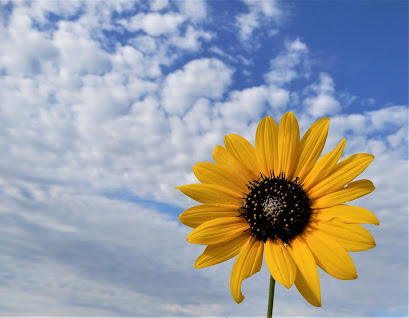 The sunflower grows in every Kansas county due to its adaptability to soils from sand to clay and its toleration of dry to medium moist soils. In the summer and early fall, the yellow flowers give the prairies and roadsides a golden glow. 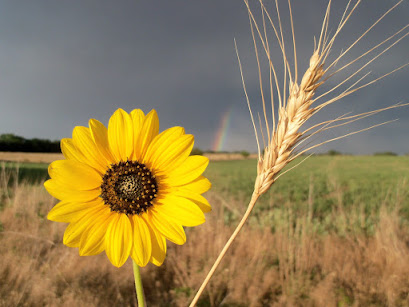 Sunflowers were cultivated in North America as far back as 3000 BC and were introduced to the rest of the world by Spanish Conquistadors in 1500.

According to an article in The Hutchinson News by Steve Gilliland, the sunflower became the state flower of Kansas in 1903. As history has it, in 1901, George Morehouse, a state senator from Council Grove, attended a rodeo in Colorado Springs where all the Kansas folk in attendance wore sunflowers identifying them as Kansans. Morehouse was so moved and inspired by the Kansas spirit, that upon returning home, he drafted the bill naming the sunflower as our state flower. 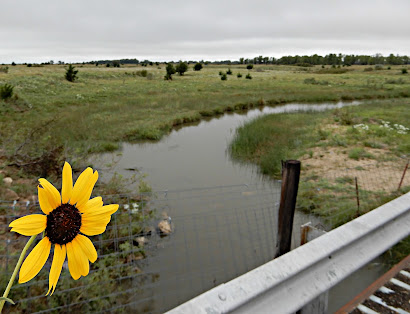 In this original bill, Morehouse stated:

“This flower has to all Kansans an historical symbolism which speaks of frontier days, winding trails, pathless prairie and is full of the life and glory of the past, the pride of the present and richly emblematic of the majesty of the golden future, and is a flower which has given Kansas the world-wide name “The Sunflower State.” 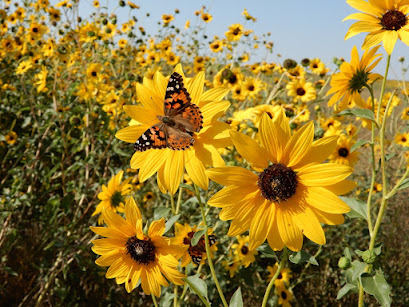 Bees and butterflies enjoy sunflowers' nectar as they pollinate the bright yellow blooms. Mammals, birds, and insects consume the foliage and flowers. 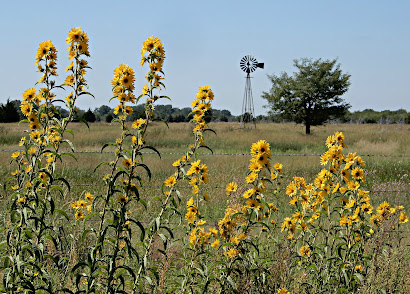 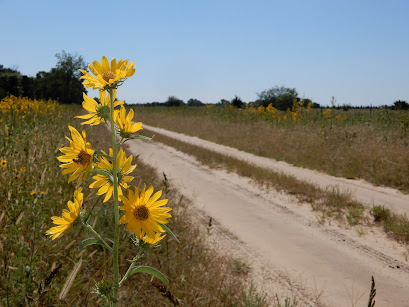 The sunflowers pictured above are a different kind of sunflowers, Maximilian. They bloom a little later in the summer. 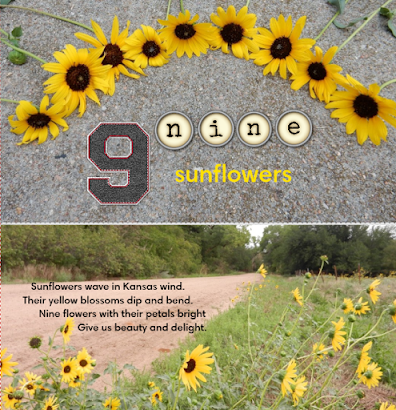 Sunflowers are so ubiquitous that I decided to use them to illustrate No. 9 in the Kansas farm counting book I made for our granddaughters. 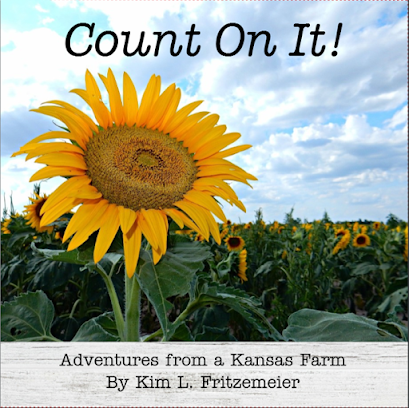 A much larger sunflower has a place of honor on the book's cover. We've never grown sunflowers as a cash crop on our farm, but they make for striking photos against a blue Kansas sky. I've borrowed a little time in another farmer's field to make a quintessential Kansas summer shot. Some Central Kansas farmers have found an alternative market by planting sunflower fields and selling the experience - giving professional photographers and families a beautiful backdrop. 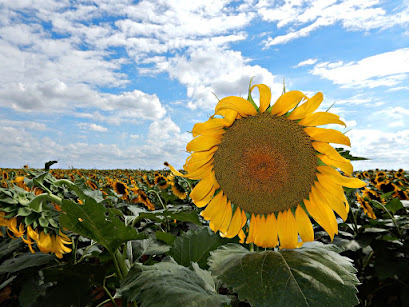 The large-headed cultivated sunflowers grown today are one of a small number of agricultural plants to originate north of Mexico in North America.
Native Americans were using native sunflowers for food more than 3,000 years ago. Over hundreds of years and careful husbandry (selecting only the largest seeds for cultivation), the Plains tribes began the development of today's large modern sunflower. Sunflower seeds are rich in protein and yield a high-quality vegetable oil.
Is it any wonder that Peter the Great fell in love with the sunflowers he discovered in the Netherlands and took them back with him to Russia? They became popular there when people discovered sunflower oil was not banned during Lent by the Russian Orthodox Church like most other oils. By the 19th century, Russia was growing 2 million acres of sunflowers annually. Around that time, Russian immigrants brought with them to the U.S. highly developed sunflower seeds capable of producing much bigger blooms. That sparked renewed interest in sunflowers as a commercial crop here in the states. I knew Russian immigrants brought Turkey Red Winter Wheat to Kansas, but I didn't realize they also brought sunflowers! 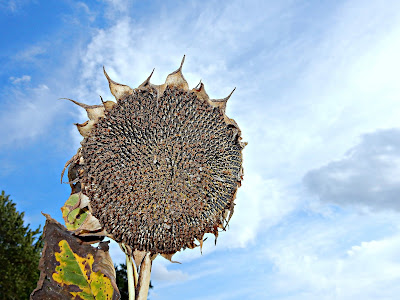 The large seed heads also can serve the winter food needs of goldfinches, sparrows and many small mammals. Cattle feeds are made from the leaves, stems, and flowers as well as the seed remains created when extracting oil. They also can be converted into biofuel. 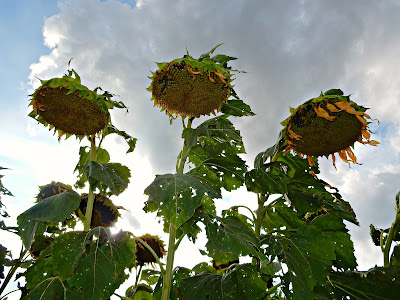 Yellow dye can be extracted from the flowers and purple-black dye from the seed. Paper and latex can be manufactured from the stems.
In 2019, South Dakota farmers produced the most sunflower seeds in the U.S. to the tune of 831.6 million pounds. They were followed by North Dakota, Minnesota, California, Colorado and Kansas. 2019 commercial production in the United States was about 2 billion pounds grown on 1.4 million acres; 2019 production in Kansas was just under 54 million pounds from 45,000 acres.  This year, Kansas is expected to move up to 3rd in the nation in sunflower production after finishing 6th last year. 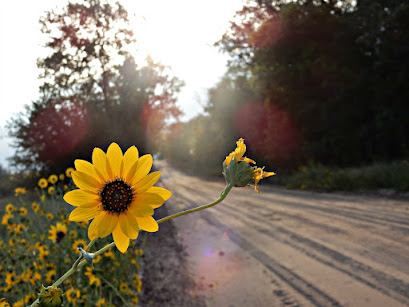 There are more than 60 species of sunflowers. The native sunflower grows to 15 feet tall with flower heads up to 2 feet in diameter, and can produce more than 1,000 seeds from one plant. 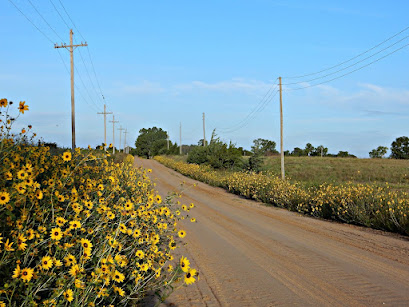 The flower head turns and faces the sun throughout the day - tracking the sun's movement. We could learn a lot from a sunflower, I think ... especially during a pandemic and election season. 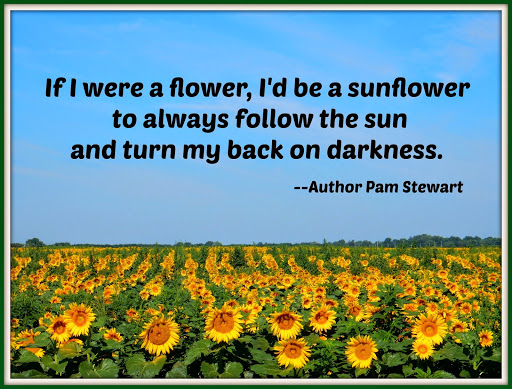