I talked to my son-in-law during the work day last week. His mom - AKA Grandma Christy - was keeping the girls during their spring break from school while Jill and Eric worked.

Christy and the girls Facetimed with me to show the volcano they'd constructed from a Little Passports box. (Randy & I and my folks teamed up to gift Brooke with a monthly subscription to Little Passports for her last birthday. Kinley gets a year of monthly Kiwi Crates.)

Anyway, Eric got drawn briefly into the conversation since the girls had moved downstairs to show me yet another project. Jill is back in her downtown office, but Eric is still working from their spare bedroom where he's been ensconced for the past year.

Christy told Eric to back up from the camera so I could see the full fashion statement he was making. Yes, like many work-at-home staffers during the pandemic, he was business on top and plaid flannel pants and warm socks on the bottom. 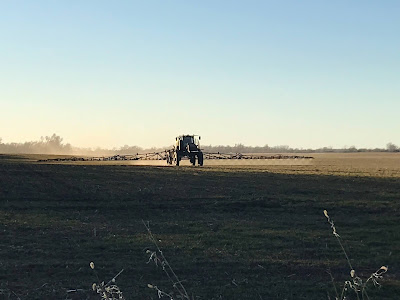 We have arranged for "topdressing" of another variety on our 2021 wheat crop. The Kanza Co-op sprayed our wheat on February 22 and 23 with 20 pounds of nitrogen per acre, along with Finesse herbicide. Because it's sprayed "on top" of the crop which was planted this past fall, it's called "topdressing."

Randy was hoping to get the task done before it rained. Mission accomplished. Just a few days later, it rained about 0.40". Then, this past weekend, we got another 1.55 inches of rain. 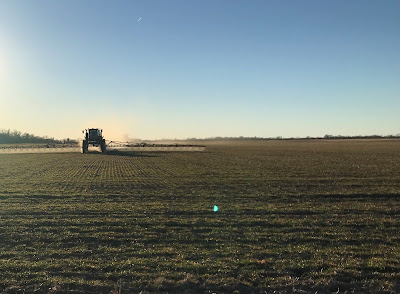 The rain helps incorporate the nitrogen and herbicide into the root system, making it more effective. 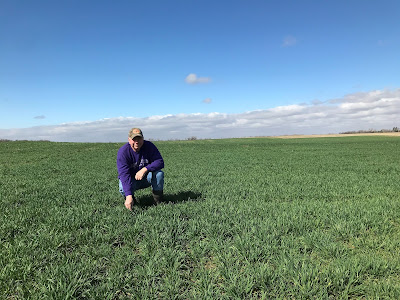 The rain and some warmer temperatures have made the wheat seem to grow overnight. (You can see the difference in the photos between February 22 and March 15.) 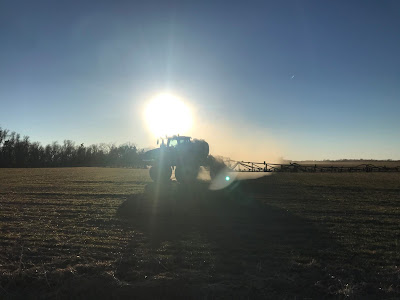 This year, Randy decided to apply 20 pounds of nitrogen per acre. He used the results from soil samples to determine the nitrogen application level. With each unit of nitrogen added to the field, there's a "diminishing return on investment." In other words, the cost eventually outweighs the potential yield bump. 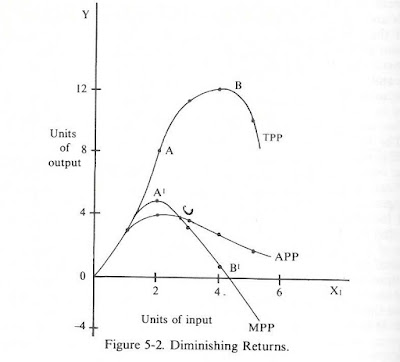 His original plan for this year was to have the co-op apply 10 pounds of nitrogen per acre. However, with a bump in wheat price, he decided to up the application rate. 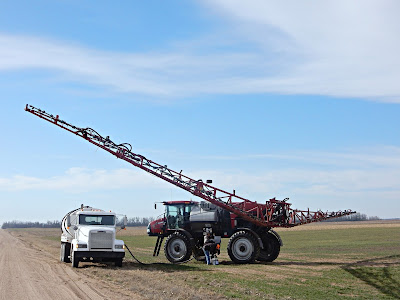 During the applicator's same trip over the field, Randy also had them apply Finesse, an herbicide used to control broadleaf weeds, including kochia, henbit and wild mustard. Finesse needs to be sprayed before the wheat breaks its dormancy. Rain helps incorporate it into the soil.

The Farmer is happy and already looking forward to Harvest 2021! However, just like in a fairytale, there are a lot of pages between "Once upon a time" and "They lived happily ever after." (For a complete look at the life cycle of wheat on our Kansas farm, check out "Aggie Visits the Wheat State," a blog I wrote a few years ago when we had Flat Aggie visit from a California elementary school.)