The headline on the email caught my eye: Ugly corn syndrome.

"OK, that's a new one," I thought. Even an old farm wife can learn something new. So I clicked on the link to the Farm Journal article on www.agweb.com to look at the article written by Rhonda Brooks, dated June 3.

Farm Journal Field Agronomist Ken Ferrie was advising farmers in the Corn Belt to look for three conditions, including ugly corn syndrome. (They were also to scout for making replant decisions and scout for insects.) While Ferrie said that some farmers tell him they have some of their best corn and soybean crops in recent memory, others say they have some of their worst. Here's what the article had to say about ugly corn syndrome:

It’s showing up in some fields now. Farmers finding yellow or yellow-streaked corn this spring have likely experienced too much rainfall, affecting nitrogen availability. High carbon loads can also be a factor—corn-on-corn or areas that had cover crops are more likely to show this phenomenon. 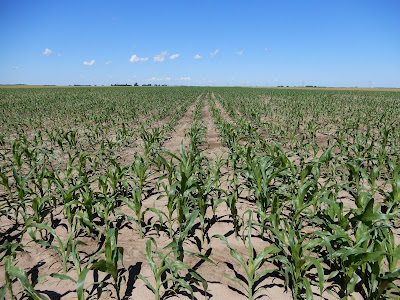 Last week, Randy and I were laughing about ugly corn syndrome. By the way, he hadn't heard of it either. But this week, we began to wonder if some of our corn is suffering from that malady. There is a yellow tinge in some places. Since we got an unexpected 0.70" of rain Monday, it's possible that the corn's off-color can be attributed to "wet feet," lack of sunshine and the resulting deficit in nitrogen. Forecasts are for hot and humid the rest of this week, so I guess the corn will be getting the heat units it needs to grow (though there's also some concern when there's a rapid shift from cool to downright hot, too). I, on the other hand, would prefer the "heat units" and humidity to be lower. I'm not ready for mid-90s, with a heat index of 100.

In the name of research, I emailed my corn crop consultant (AKA my brother, Kent, who raises a lot more corn than we do.) His diagnosis - after I sent some photos - was, indeed, ugly corn syndrome. He attributes it to the amount of cold, cloudy and wet weather we've had. He also said some varieties show it more than others.

And the hot weather is doing more than making me uncomfortable, he says. It also impacts the corn. They started planting irrigated corn almost two months ago.

We see it (ugly corn syndrome) to some extent most years, more this year due to the amount of cold, cloudy and wet we’ve had. Some varieties show it more than others. I think it’s also the plant having to metabolize the herbicides we use in the cloudy and cold. It’s doing fine but should be waist high at this point, and we’re not.  And now that we’ve warmed up, it’s really trying to grow fast, and it doesn’t have the root system developed to handle that quite yet.

Another spring-planted crop - our milo crop (below) - appears off to a good start. It may be hard to see the little green sprouts down the rows in this overview shot. 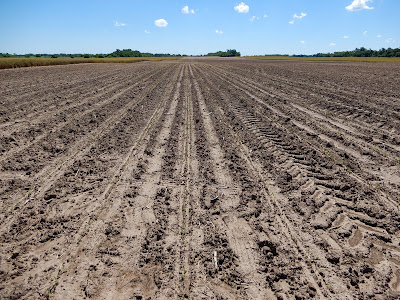 But a closer look revealed a good stand after good moisture. 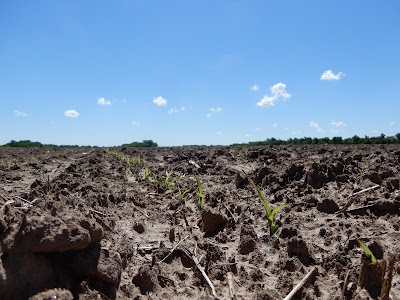 No ugly milo syndrome here ... at least, not yet. (For the record, I'm not sure ugly milo syndrome is a "thing," but until last week, I didn't know about ugly corn either ... other than corn that was impacted by a drought or low yields or another dozen problems.) 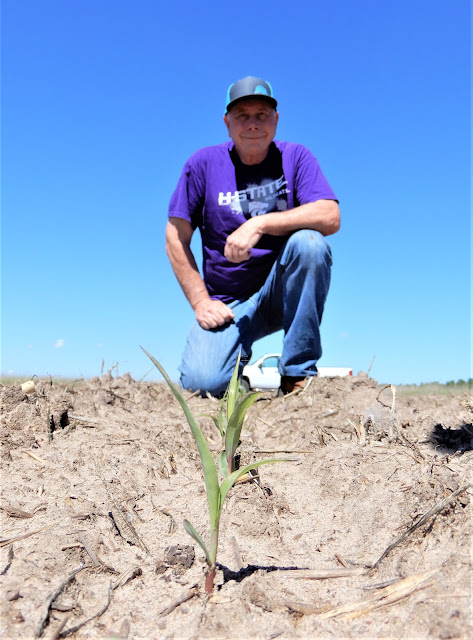 If you'd like an in-depth look at corn, my brother is featured in this video produced by Kansas Corn. He operates our family's fifth-generation Pratt County farm in South Central Kansas.