Moments and Memories: An Ode to Irises

Sometimes, you never know the value of a moment until it becomes a memory.

I had lots of moments in my Grandma Neelly's kitchen. Now, I wish I'd spent some of those moments asking Grandma her secrets for her homemade angel food cake or her Sunday dinner noodles. Too often as a kid, I was rolling my eyes at having to wash the aluminum foil and plastic bags to save for the next use.

But I am sure my affinity for irises comes from Grandma Neelly. I made my Depression-era Grandma happy by standing at the sink and helping wash those "disposable" items. (She was a recycling advocate long before the "Recycle, Reuse, Reduce" message came in vogue.) But that kitchen window also offered a springtime view of purple irises.

I sometimes accuse Randy of not listening, a common malady among husbands (and, if I'm honest, probably among wives, too.) 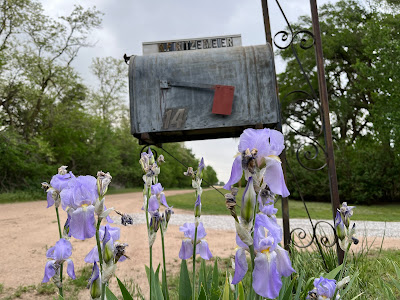 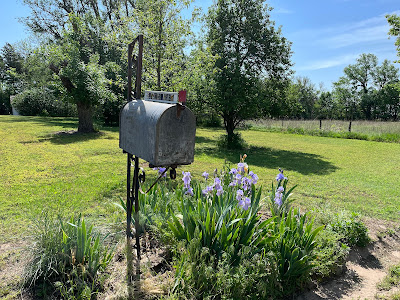 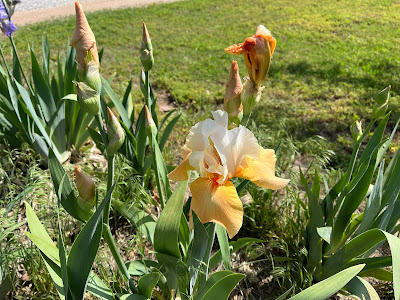 But then he proves me wrong when he plants irises outside our front door and by the mailbox. This year, there are a few yellow irises nestled among the purple blooms. 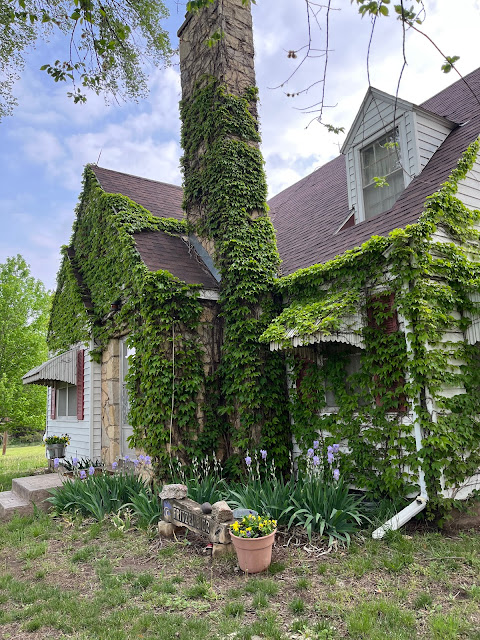 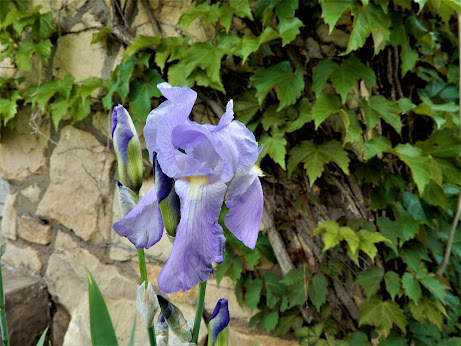 This year, they have been prolific. Even though our wheat has struggled with the drought conditions, it seems the irises are thriving, despite the lack of rain. 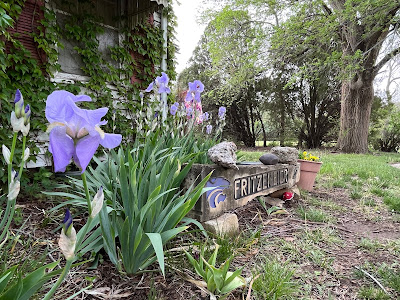 Randy also watches the "secret garden" of irises along the Zenith Road with as much anticipation as I do, slowing down as we travel by, ready to see when the lavender-hued petals unfurl. 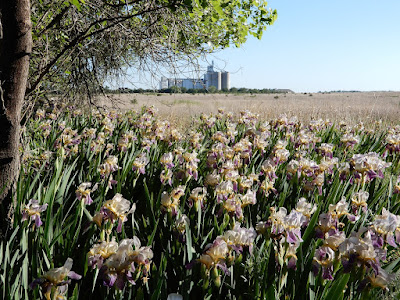 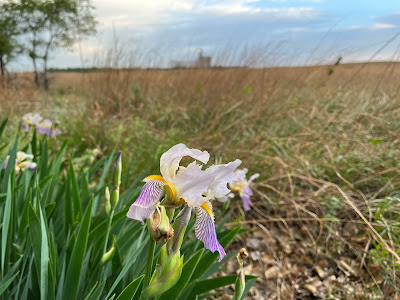 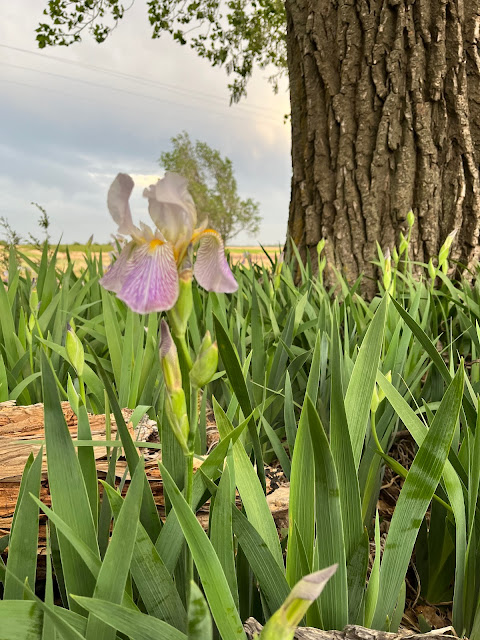 "My" Zenith irises are nestled under big cottonwood trees along the Zenith Road. It may be at an abandoned farmstead, though we're not sure. 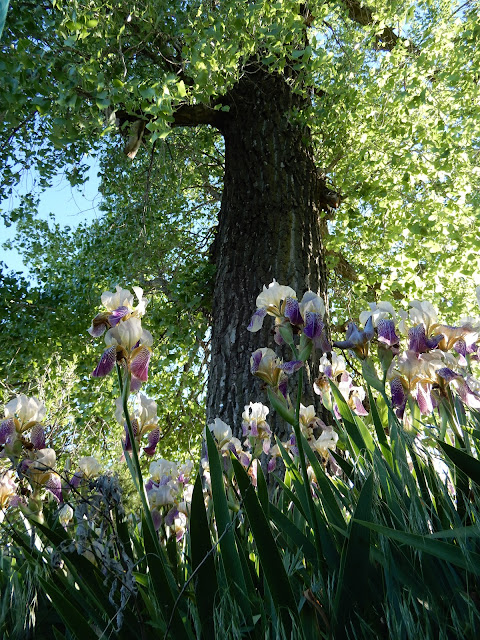 This year must be a good year for the irises. Or I must have been at the right place at the right time to discover another "crop" of purple irises. 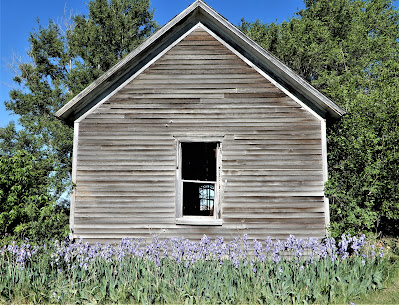 Just south of Stafford, the bed of irises brightens up an old building. I first saw them when I was taking Randy to Pratt to pick up the semi. I've been back a few times, trying to find a time when the blooms weren't swaying in the Kansas wind and when the light was right. 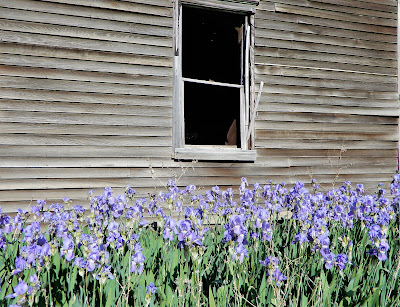 The fragile purple petals are a contrast against the weathered, rough wood. 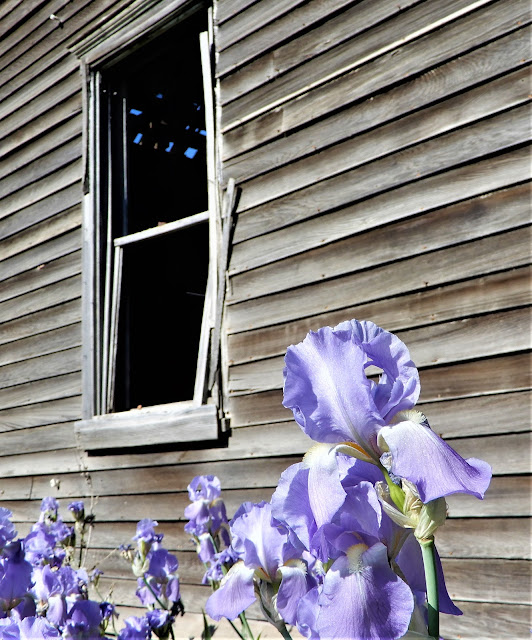 I'm not sure who they belong to, but I figured I could beg forgiveness for trespassing. And nobody seemed to care except a barking dog. 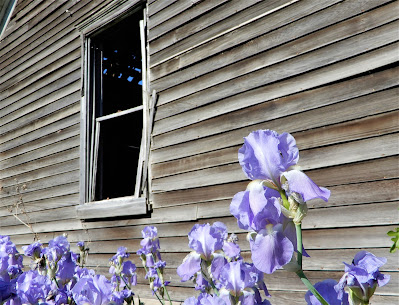 Even though I may sometimes feel like I'm "too busy" to stop and smell the roses (as the saying goes) - or to stop and appreciate the irises, it's always turns out to be worth the pause. 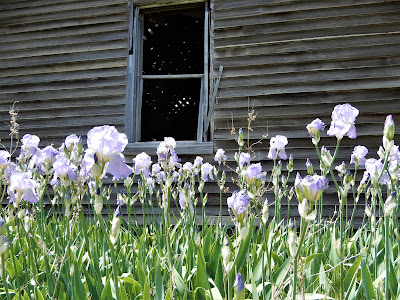 It doesn't have to be
the (blue) iris,
it could be weeds in a vacant lot,
or a few small stones;
just pay attention
then patch a few words together
and don't try to make them elaborate,
this isn't a contest but the doorway into thanks,
and a silence in which another voice may speak.
From Mary Oliver's book of poems, Thirst 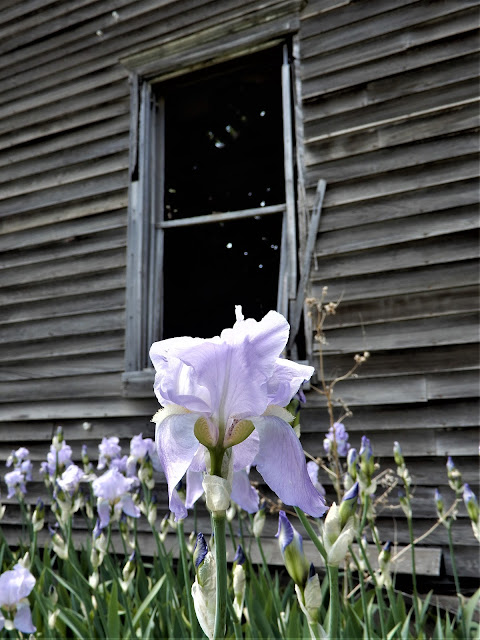