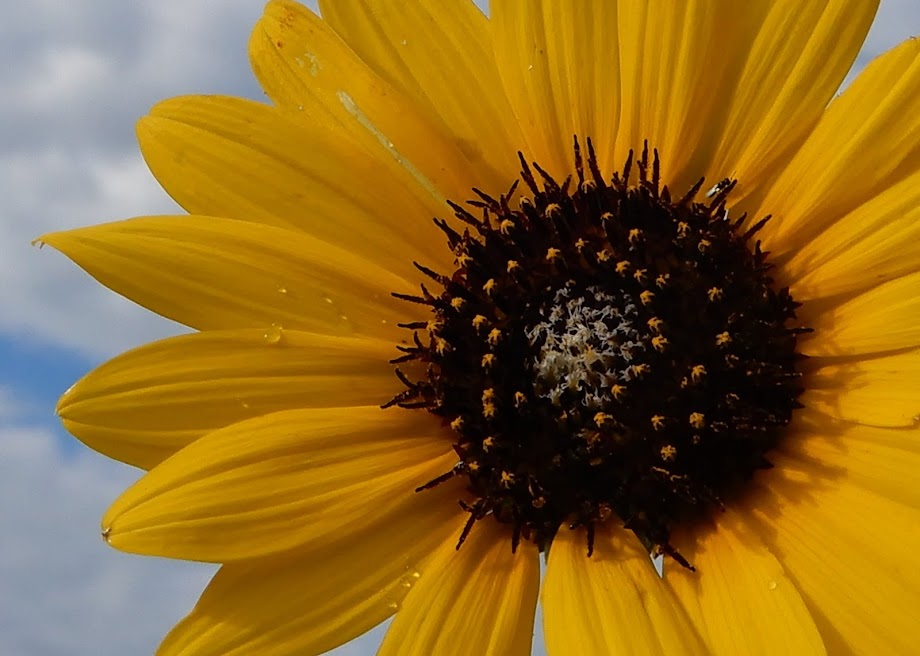 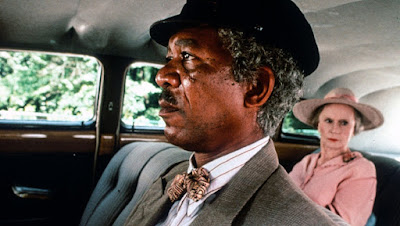 We drive our share of "ladies" around here, too. However, we don't provide a nattily-dressed chauffeur in bowtie and livery cap. Sweatshirts and jeans are the uniform of choice. The hat Jessica Tandy was wearing as she relaxed in the back seat of her limo would not last long on a 4-wheeler. The pink suit would be rather unforgiving, too, following the business end of a cow on a dusty road. 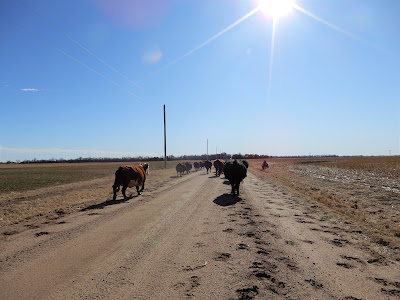 And the driving is a whole different animal ... so to speak.


Well, driving our cattle may not fit every part of the Wikipedia definition. But we do "compel" them to walk from one location to another. Thankfully, our cattle drives don't last days and don't involve a significant distance. And, instead of cowboys on horseback, we opt for what Randy calls our Japanese horses - our 4-wheelers. 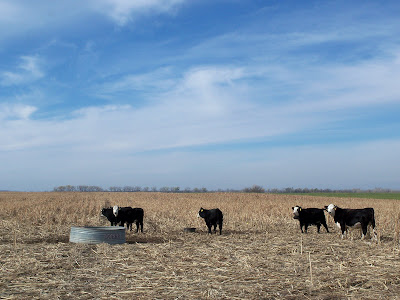 We have spent a couple of recent afternoons moving cattle off milo and sudan stalks and into pastures or corrals. It's almost calving time on The County Line, and it's easier to have said bovines in a more contained area. 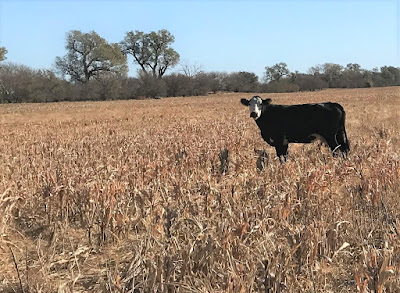 The first challenge is urging the cattle to cross the line where the electric fence has been. During their time munching on stalks, they've gotten used to the boundaries and they know that the electric fence can provide a little bit of a shock if they touch it. 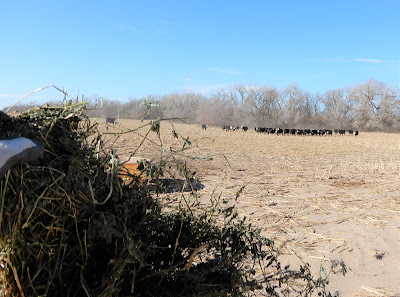 A little bait hay eventually entices them to cross the old barrier. One of my jobs was tossing the hay up into the air in an effort to get the cattle moving toward me and the fence we'd let down. 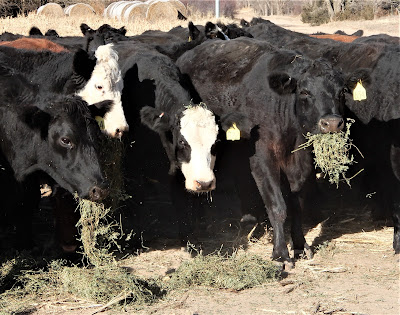 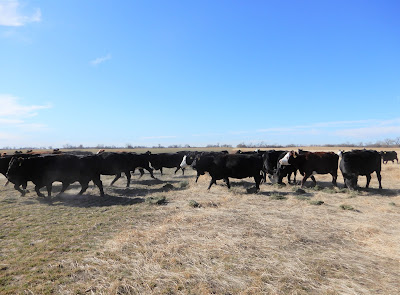 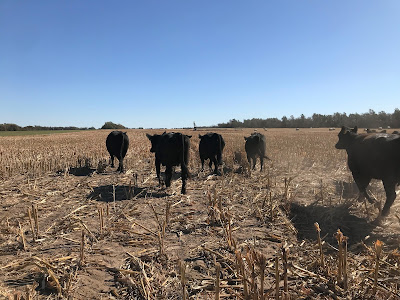 Then it's a matter of getting them to move in the right direction. 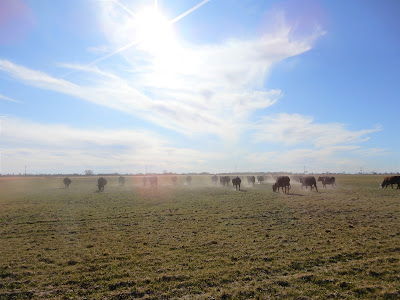 Sometimes, they want to stop for a bite to eat from the wheat fields. 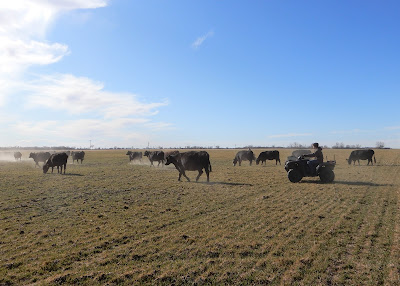 But some "hey, hey, heying" and a push from behind with the 4-wheelers usually gets them moving again. 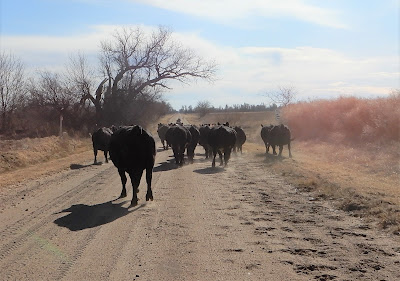 Once on the road, we try to keep them from mingling with our neighbor's cattle or having an excursion into a shelter belt. 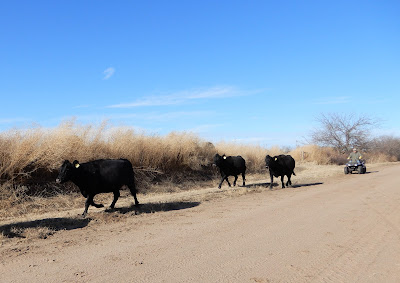 There are always some that lag behind. (Believe me, I get it. I'm not ever going to be the first one to cross a finish line either!) 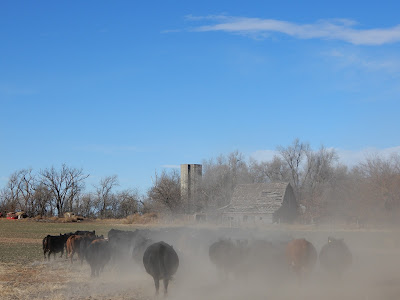 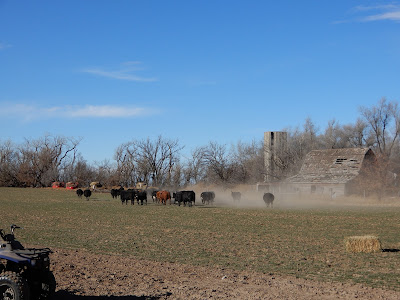 Well, I'd rather not. Thanks anyway.

We moved the final group last Thursday. It was a beautiful day. I was worried when they went through a gate before getting to the pasture. 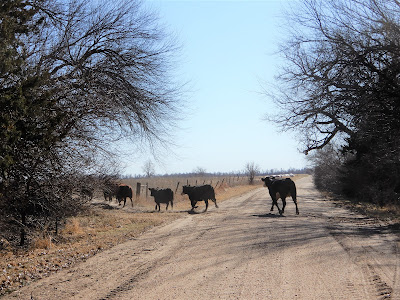 But while I blocked the road, the guys urged them on, and they ended up playing follow-the-leader into the pasture south of our house. Well done, ladies!

After we finished our drive time, we had to separate some cows and heifers that had mingled together earlier this fall. 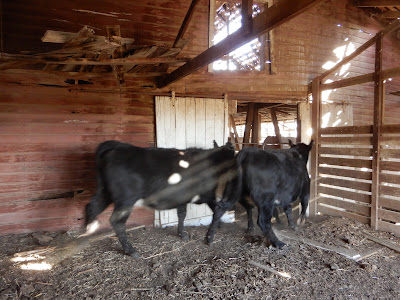 The heifers actually did get a little real "drive time" with a chauffeured trip to the corral right by our house. Since heifers - first-time mamas - require more frequent checks in the "maternity ward," it's handier to have them right by the house. 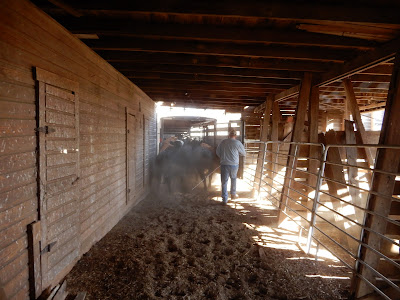 The heifers are scheduled to start calving the last week of January. 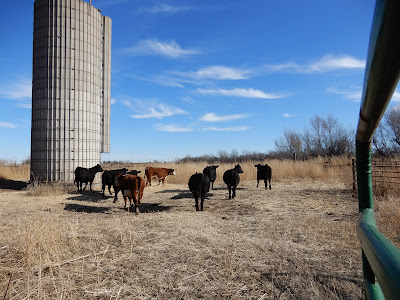 Most of the cattle have access to water generated at the corrals. However, we still have to haul water to one location. 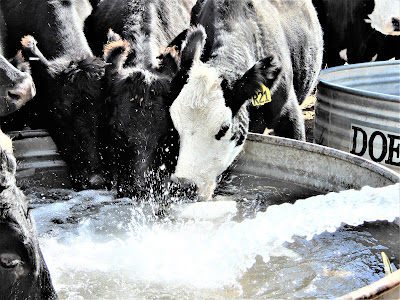 Feeding hay and silage are also part of the winter cattle chores. The feeder calves are always glad to see me arrive in the feed truck. 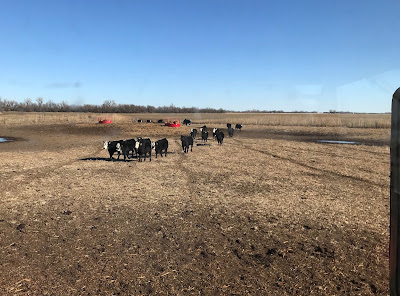