I'll Take Some History With That Cherry Limeade 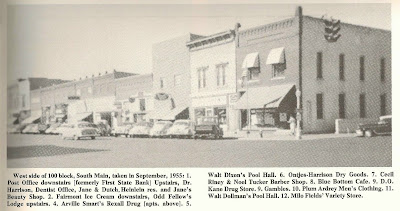 Stafford's Main Street looks different than it did in this photo from 1955 (found in Stafford's Centennial book, Crossroads of Time: 1885-1985). The latest census shows what everyone already knows: The population in rural communities, including Stafford, keeps decreasing. But, instead of giving up, Stafford citizens are pulling together and trying to make lemonade out of lemons - or, in this case, beautifully topped ice cream sundaes out of plain old vanilla ice cream.

In Stafford, you can have that sundae or a freshly-squeezed limeade at an historic soda fountain located at the Stafford Mercantile. 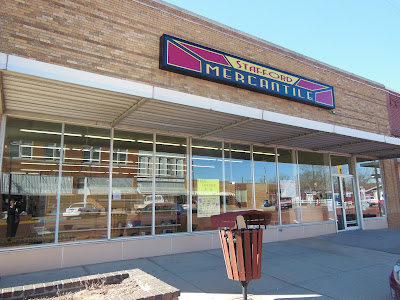 The "Merc," a variety store on Main Street Stafford, has been open since the fall of 2012. Local investors came together to return a business to the vacant storefront after national retailer Duckwall's pulled its stores from most small Kansas communities three years ago.

The Mercantile makes it possible for residents to shop for things like Wrangler jeans or a bridal shower gift without driving 30 minutes to Pratt or Great Bend or 45 minutes to Hutchinson. 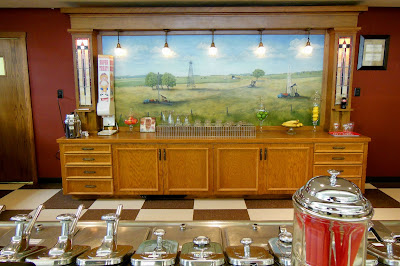 To install it at the Mercantile, they added oak columns from a Stafford Victorian-era home to frame the soda fountain. The back bar was from a prohibition-era speakeasy near Stafford Lake, and booths and marble tables are original to the same drug store as the soda fountain.  All were dug out of different storage places and refurbished. 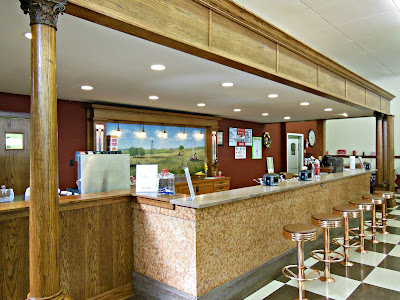 A year ago, Senator Jerry Moran, R-Kansas, was in Stafford to present a Building Better Communities Award. The award spotlights positive community action in Kansas and shows how creative thinking and teamwork make a positive difference.

In small communities across America, the people there, they work hard. They come together to find common-sense solutions. They solve problems. They try to make a difference in the life of their families and their community. They also strive to provide a better future for their kids, so that every child has the opportunity to grow up, pursue the American Dream and reach their goals.

For rural communities to survive and prosper, citizens have to work together to create their own opportunities for success. … The reality is that those communities that are going to have a bright future are those who decide, on their own, to work together within that community to make certain that’s the case.  An example of a community that rallied together in a way to make good things happen and make the community better for the future is the community of Stafford. ...

Rural communities across Kansas have been hit hard by the economic downturn over the last few years and many towns have encountered the closing of businesses. Main Street looks a lot less appealing. There's a shortage of health care services. The younger generation is leaving home in search of employment. In light of these challenges, the community leaders of Stafford have taken steps to secure that town’s future.  …

Comments from Senator Jerry Moran, R-Kansas
Speech from the floor of the U.S. Senate
January 30, 2013
See the complete speech

Senator Moran's staff also prepared a video that's been posted to Youtube (That link is at the bottom of this post.) There are three other videos that focus on specific ways Stafford is looking to thrive (click on each of the underlined links to see those videos.) Besides featuring the Stafford Mercantile, another talks about how the community rallied to save the Stafford District Hospital. Another features Stafford USD No. 349's SEED (Stafford Entrepreneurship and Economic Development) Center, a charter school for high school students. It's where students develop a business plan, talk to the banker, make a product or deliver a service and then actually open and operate their own business on Main Street Stafford.


Stafford is proving that when communities look within themselves for growth, they do have the capability to forge a stronger, more positive future.

Maybe revitalizing a community is like making an old-fashioned cherry limeade. Even in a community "squeezed" by challenges, the future looks a lot more "rosy" when people get "stirred up" and come together. (You can get one of those cherry limeades at the Mercantile's soda fountain by the way. They are even half-priced on Thursdays!)

Also this week as a President's Week celebration, all merchandise at the Mercantile is 20 percent off (except for consigned items). The Mercantile definitely needs support from its hometown and from visitors to survive. You can be part of the solution by shopping locally. Or, if you're from outside Stafford County, come visit us and spend a little time at the soda fountain. Even though it's historic, it has all the modern conveniences - like free Wi-Fi!. You can also "like" the Stafford Mercantile on Facebook.


***
Note: This continues a series of posts about things to see and do in our community of Stafford. On Tuesday, I featured the Nora E. Larabee Memorial Library and the gorgeous stained glass window, leaded glass and woodwork in the building which has served Stafford for more than 100 years. Wednesday, I focused on the Frank Lloyd Wright influences in our home church, Stafford United Methodist. This post is rewritten from a Kim's County Line post dated February 8, 2013.
Posted by Kim at 7:36 AM