Light the Advent Candle: PEACE? Are You Kidding Me? 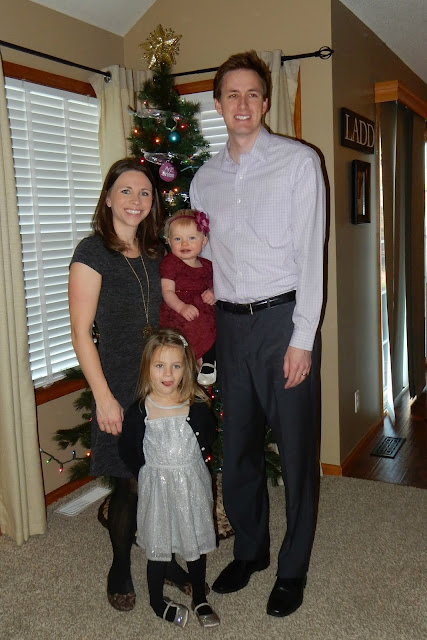 Maybe it was ironic that a family with a 3 year old and a 15 month old lit the Advent candle for PEACE. Throw in a couple of parents pursuing their master's degrees while still working full-time, and PEACE seems like an abberation lost in the foggy memory of a time when everyone slept through the night. When was that? 2011?

An attempt at a family photo in Christmas finery prior to church is a lesson in frustration ... certainly not PEACE. The 3 year old thinks the dress is "too scratchy" - though she picked it out herself. (Mommy has learned that even 3 year olds have firm opinions about fashion choices.) No amount of "See how pretty the sparkles look in the light?" seems to work.

A smile is finally coaxed from the little one. (Where was that smile when we took family photos a month ago. Miss Brooke?) But a wayward tongue from the bigger one isn't seen until examining the photos on a computer screen 3 hours away. 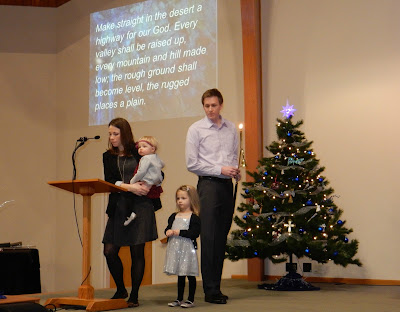 But as I watched Jill and Eric light the PEACE candle with their girls at church on December 6, I thought maybe it was just right. No, their lives are anything but peaceful at the moment. But isn't PEACE what we're all waiting for as we anticipate Christ's arrival once again during this Advent season?

A unwed teenager doesn't seem the "ideal" mother for the Savior of the World. A "crazy" guy dressed in animal skins and eating locusts doesn't seem an appropriate messenger for Emmanuel. We don't expect a Great King to be born in a smelly manger. Second-class citizens like the shepherds shouldn't have heard the Good News before the high-falutin' Bethlehem elite. 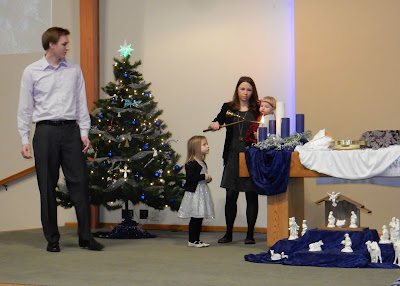 So maybe harried modern parents toting a baby and a preschooler are just the right people to light a PEACE candle. 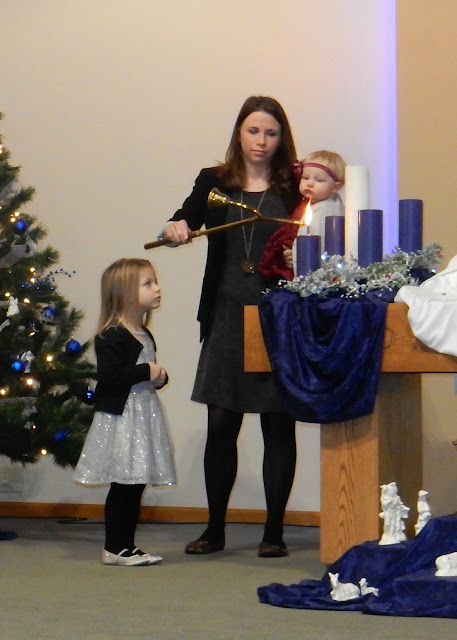 Anyway, that's what I thought as I watched Kinley's face as Jill lit the candle. 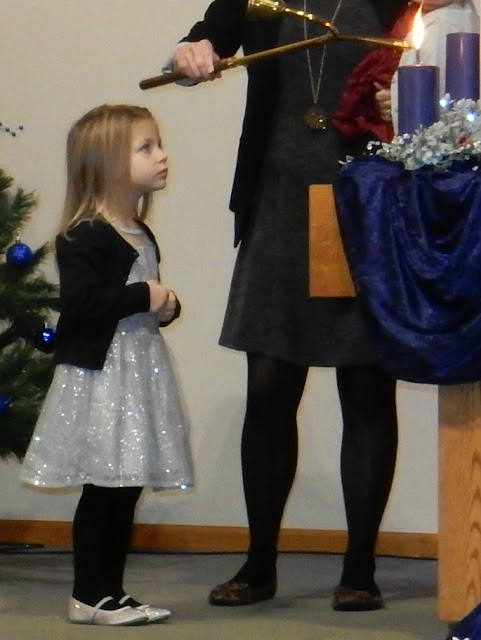 Jesus comes, not just to those of us in Topeka or Stafford, but even to those in New York, Beverly Hills, Syria, Iraq, Africa, North Korea. Jesus comes to us in the words of a preacher and in the song of a choir, but also in the siren of an ambulance, in a letter opened in a prison cell, in a visit to a nursing home, and in the smile - or cry - of a child.

Yes, Jesus comes in the smile or cry of a child. And in that look of wonder and expectation like I saw on Kinley's face. He comes when little girls hang hats and mittens on a church Christmas tree for other little girls and boys who don't have them ready to grab at the back door on a cold day. 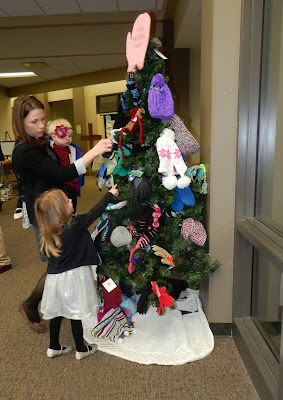 Long ago, Randy and I were the parents up there lighting the Advent candle at the Stafford UMC, hoping our little girl and our little boy didn't light each other or the church yule log on fire during a Advent lighting time.

We sang the same song that we sang back then, too:


Light the Advent, two:
Think of humble shepherds, who
Filled with wonder at the sight
Of the child on Christmas night.

Jill's and Eric's life got a little more peace this week, when they officially finished work on their master's degrees. Jill earned a 4.0 for her work on her master's of public health from Creighton University, and Eric earned his MBA. Along the way of their online classes, they added Brooke to the family mix. We are very proud of them both!


***
I'm linked to Jennifer Dukes Lee's Tell His Story over at her blog. Click on the link to see what other bloggers are writing during this Advent season!
Posted by Kim at 7:18 AM