Kinley is not sure the Santa we saw at Manhattan's WalMart was the real Santa - her words, not mine.

"I think the real Santa might be too busy working in his workshop," Kinley told us.

The WalMart Santa was friendly enough, but he wasn't as hefty as the stereotypical version. And then, when we went to a Christmas festival just down the road at Blue Earth Plaza and saw Santa again, Kinley was even more skeptical.

"How'd he get over here so fast?" she said, as we hurried the duo past the curving line of children and parents waiting to talk to Santa and checked out the ice sculptures instead. 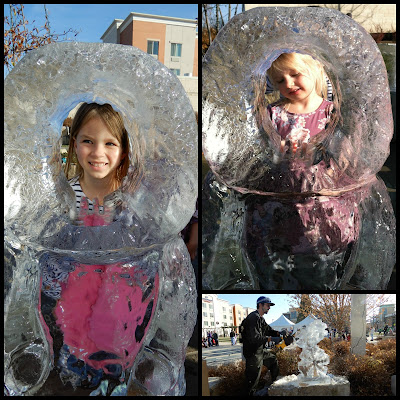 Brooke didn't offer an opinion about Santa's authenticity. But she was not going to interact without the buffer provided by Grandpa.

Randy is hoping that it was the real guy from the North Pole and not just an imposter.

Santa looked at me and said, "Do you suppose he'll get a red tractor for Christmas?"

I looked at Santa and said, "I kind of doubt it, even though he's been pretty good this year." 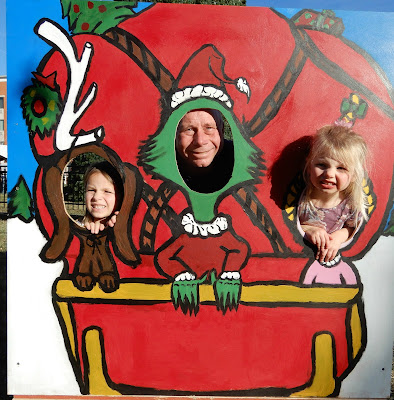 At the time, I was questioning my decision to be at WalMart on a Saturday in December. When we entered the doors, there wasn't a cart available. We waited until someone leaving politely asked if we needed a cart.

And I was there with two little girls - neither of whom wanted to ride in the cart. They were willing to hold onto the cart, but that made us worthy of a "wide load" designation in a store packed with shoppers, carts and aisles with items strategically placed to entice us to buy, buy, buy!

But we were there for a specific purpose: Before we left Stafford to babysit the girls for the weekend, I'd gotten a gift tag from the Stafford Angel Tree. I asked for a little girl in the 3 to 6 age range because I wanted my experts to help me.

There were a couple of reasons for that. First, I'm notoriously decision-challenged. (Just ask my family.) Second, I thought it was a good exercise for Kinley and Brooke. On our way across town, I told the girls that we were going to shop for a little girl who, according to the gift tag, "likes reading and coloring," two activities they love, too. I told them that the tag gave us her shoe size and clothing sizes and that we'd pick out those things, too. Her parent also said, "She'll be happy with anything!" That sentiment made me even more eager for the girls to wander the toy aisles for what they thought would be the perfect toy to add to the Christmas bag.

I explained that this little girl might not get much for Christmas unless we helped out.

"Why?" my curious helpers asked.

"Well, sometimes Mommys and Daddys don't have enough money to buy toys or even new shoes," I explained. "Sometimes boys and girls don't have as much as you guys do, so it's up to us to help them out so they can have a fun Christmas, too, just like you guys will."

Earlier in the month, the girls and their Mommy had already packed shoeboxes for Operation Christmas Child, a project at their church. They had found treasures small enough to pack inside a shoe box.

For the Angel Tree project, we didn't have that size restriction. The hardest part was paring down the girls' choices. In the end, they picked out light-up shoes, saying their Mommy didn't let them choose the illuminated version for themselves during their last shoe-shopping trip. They selected clothing, books, coloring book and crayons, as well as a baby doll complete with stuffed animal. 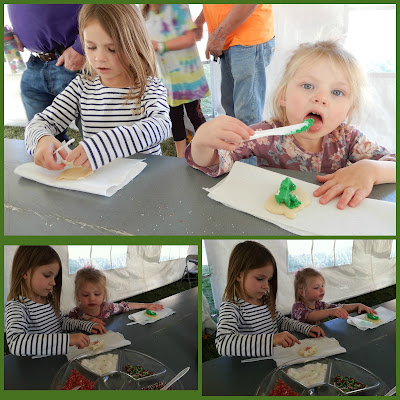 When Jill and Eric got home, Jill quizzed the girls about what they'd done. They talked about the cookie decorating and the ice sculptures at the Christmas festival. They showed their craft creations.

But then Brooke offered an explanation about shopping for another little girl. And I was amazed at how much her 3-year-old mind had retained, telling Mommy that we were helping a little girl have a good Christmas.

I usually bring a bag of library books to read when we visit the girls. This past weekend, my voice was out of commission because of a cold. But there were evidently lessons taking place anyway.

Besides the lessons about sharing and giving, Grandma learned that she still was able to get three people ready and out the door in time for an 8:30 church service. (I did let Grandpa fight a shoe selection battle while I went to change.) 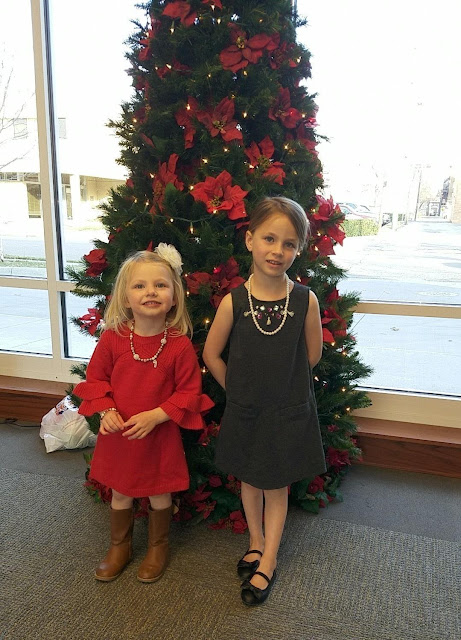 Grandma also learned that it's nice to just sit in the audience and enjoy the show at a church Christmas program. (I was in charge of the Stafford UMC Christmas musicals and programs for a lot of years, so I appreciate all the work behind the scenes.)

And, if I get discouraged about my lack of progress in decorating and baking for Christmas because I'm still fighting this silly cold, I'll just watch the video of Brooke and her preschool buddies rehearsing their big moment in the church Christmas program. And I'll remember her sweet little voice telling her Mommy that we were helping another little girl have a good Christmas.

That's what it's all about anyway.


Brooke's Away in a Manger from Kim Fritzemeier on Vimeo.