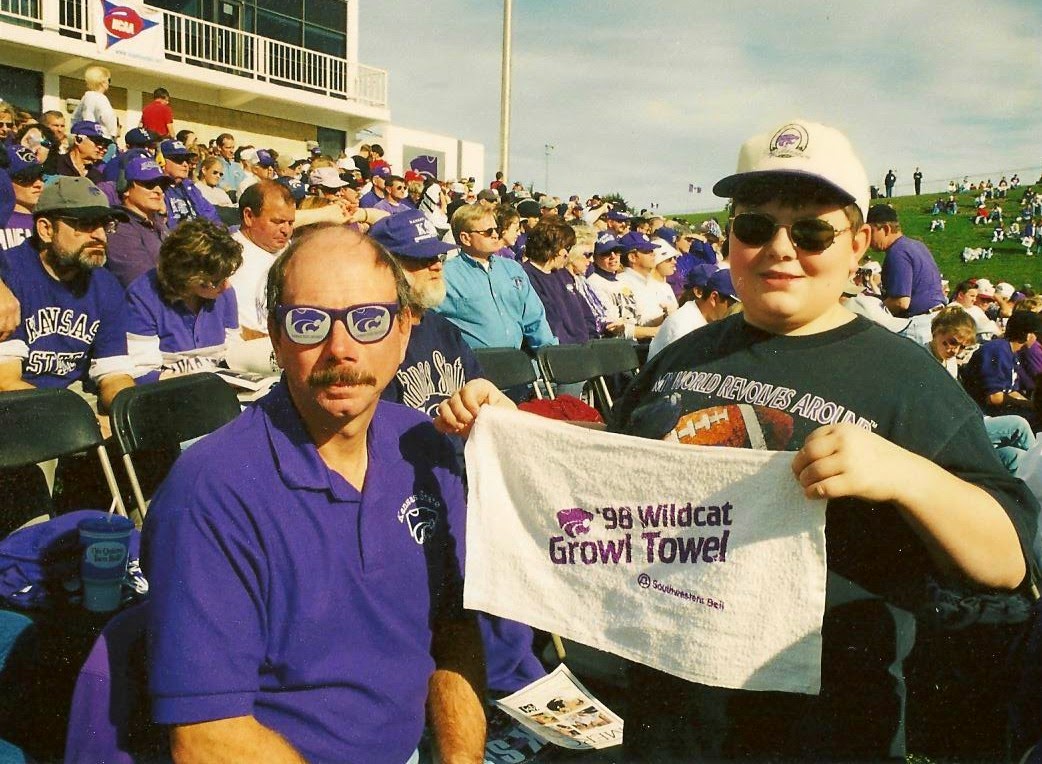 NOTE: This is a repost of a post I wrote in 2015. As Bill Snyder announced his retirement yesterday, I want to join the multitude of K-State fans wishing him well in this second round of retirement. Yesterday on Twitter, Brent posted this photo I took back in 1998. Here's what he had to say:


My wardrobe from 1996-99 pretty much consisted of a rotation of like 20 K-State football t-shirts. Some of the best memories of my childhood were thanks to Bill Snyder and for that I will forever be grateful. #ThanksCoachSnyder

This Mom echoes that thanks, Coach! 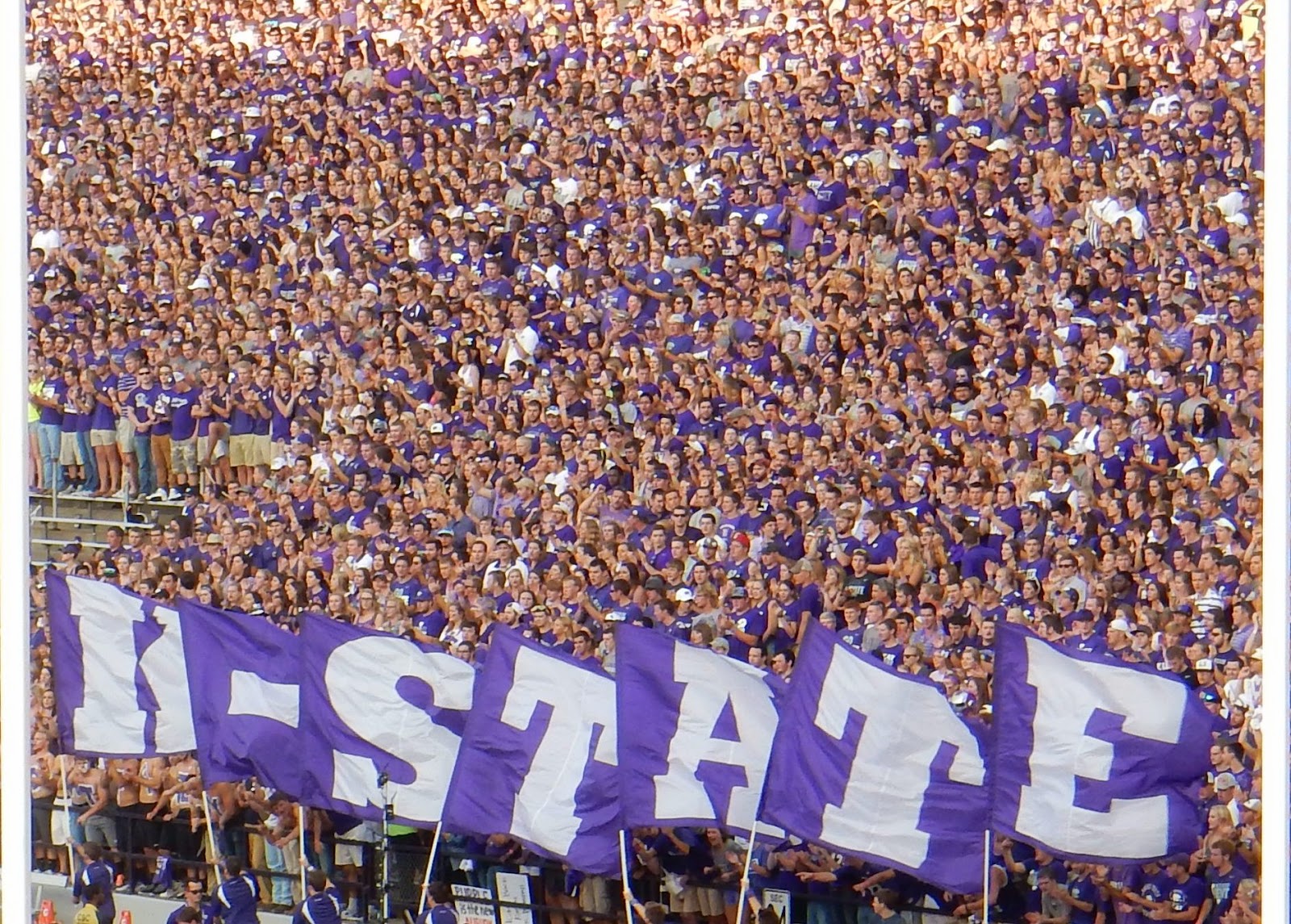 I sent K-State football coach Bill Snyder a handwritten note a few weeks ago, congratulating him on his induction into the College Football Hall of Fame. My favorite part of the national football championship was watching Coach Snyder walk onto the field during the coin toss.

I made my own notecard, using a photo I'd taken at the K-State-Auburn football this past September. I hand-printed my congratulations because he has done the same for so many people.

I didn't expect to receive a letter back. But I got one anyway. 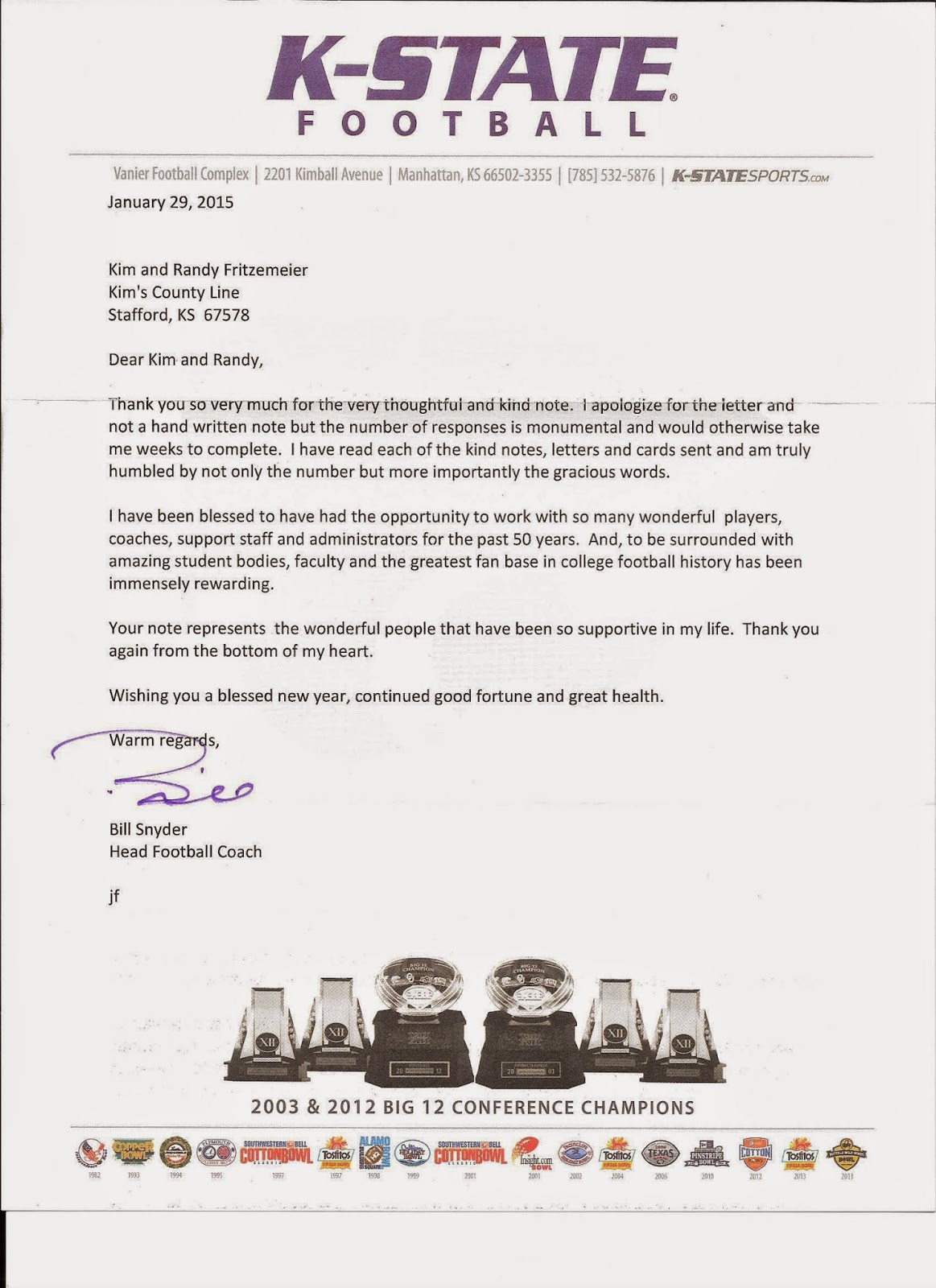 In it, he apologizes that he didn't hand-print the letter himself. He got so many congratulatory notes that he responded via a typewritten letter. But he says he read each and every one. I believe him. He's that kind of guy.

I was a student at K-State in the late 1970s. Attending football games was a lesson in futility. I always went because I grew up a K-State sports fan. But I sure didn't have to fight for elbow room. Our football program was in the cellar of the college football rankings.

Week after week, we'd make the trek across campus from the Derby dorm complex and sit in the stands. Despite our chants to "Eat 'em up! Eat 'em up! K-S-U," it was our football team who was getting chewed up and spit out on the field week after week.

Bill Snyder was hired in 1988 and has been called "the architect of the greatest turn around in college football history." The Wildcat program was in the midst of an 0-26-1 run when he was hired and had been to just one bowl game in its first 93 seasons. He took the worst college football program in the nation to a perennial top-25 contender. 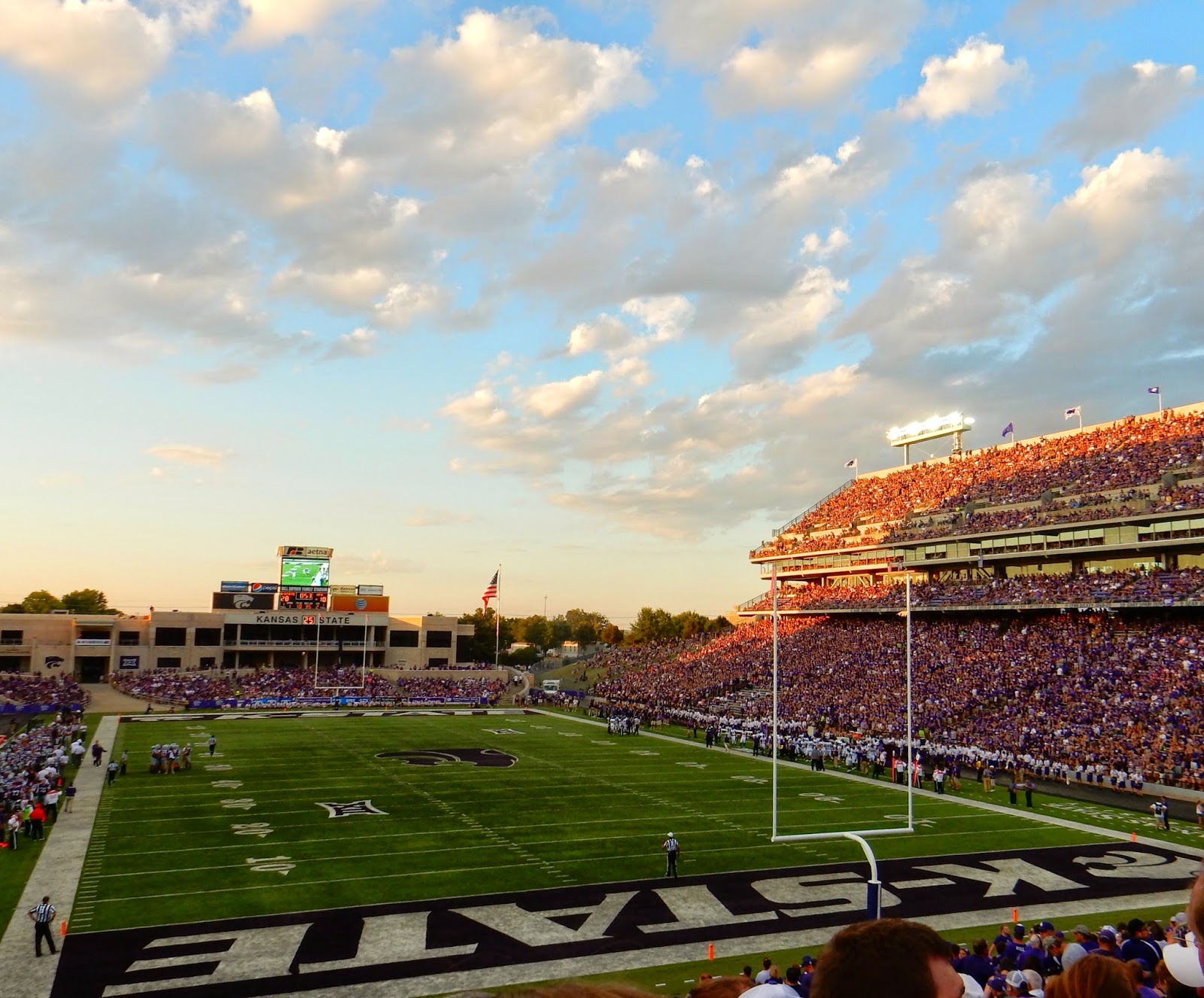 He's a five-time national Coach of the Year honoree and a seven-time conference Coach of the Year recipient. He's coached the Wildcats to 19 bowl games and two Big 12 championships. He's compiled a 215–117–1 record in his 27 seasons as K-State head coach (updated to reflect current record).

Impressive? Sure. I love cheering for a winning football team after so many years of drought. But what's most impressive to me is Bill Snyder, the human being.

Every so often, an athlete from a competing school posts a handwritten Coach Snyder note to Facebook or Twitter. Sometimes, it's an athlete hurt in a game vs. K-State. Sometimes, it's a player who has achieved something special on the football field. Every time I see one of those notes, I think about how blessed K-State is to have Coach Snyder at the helm of its football program.
Brent was born in 1988 and has been a big, big, big fan of Bill Snyder his whole life. For many of those years, we sat in the north end zone during football season. Coach Snyder and his team would walk right by us on the way to the locker room. It was a thrill for our biggest little K-State fan.

Snyder posters and quotes dominated the decor in his childhood room. Then, Coach Snyder sent Brent a letter. Brent won a national award while working for K-State Sports Information as a student intern, and Coach Snyder congratulated him. Brent framed the letter, and it has hung on the walls of his home, be it in South Carolina, Kentucky and back to Manhattan. It's one of his prized possessions.

I didn't think I could like Coach Snyder more than I already did, but when you encourage one of my kids? Yep, I liked him even more. And it made me think about the ways I could and should encourage others who touch my life in a positive way.

A few years ago, Coach Snyder came up with 16 goals for his football team:

Yes, it's great to win football games. It's even better to have a coach who teaches these principles the football players will carry long after they quit tossing around the pigskin. The rest of us should pay attention, too. 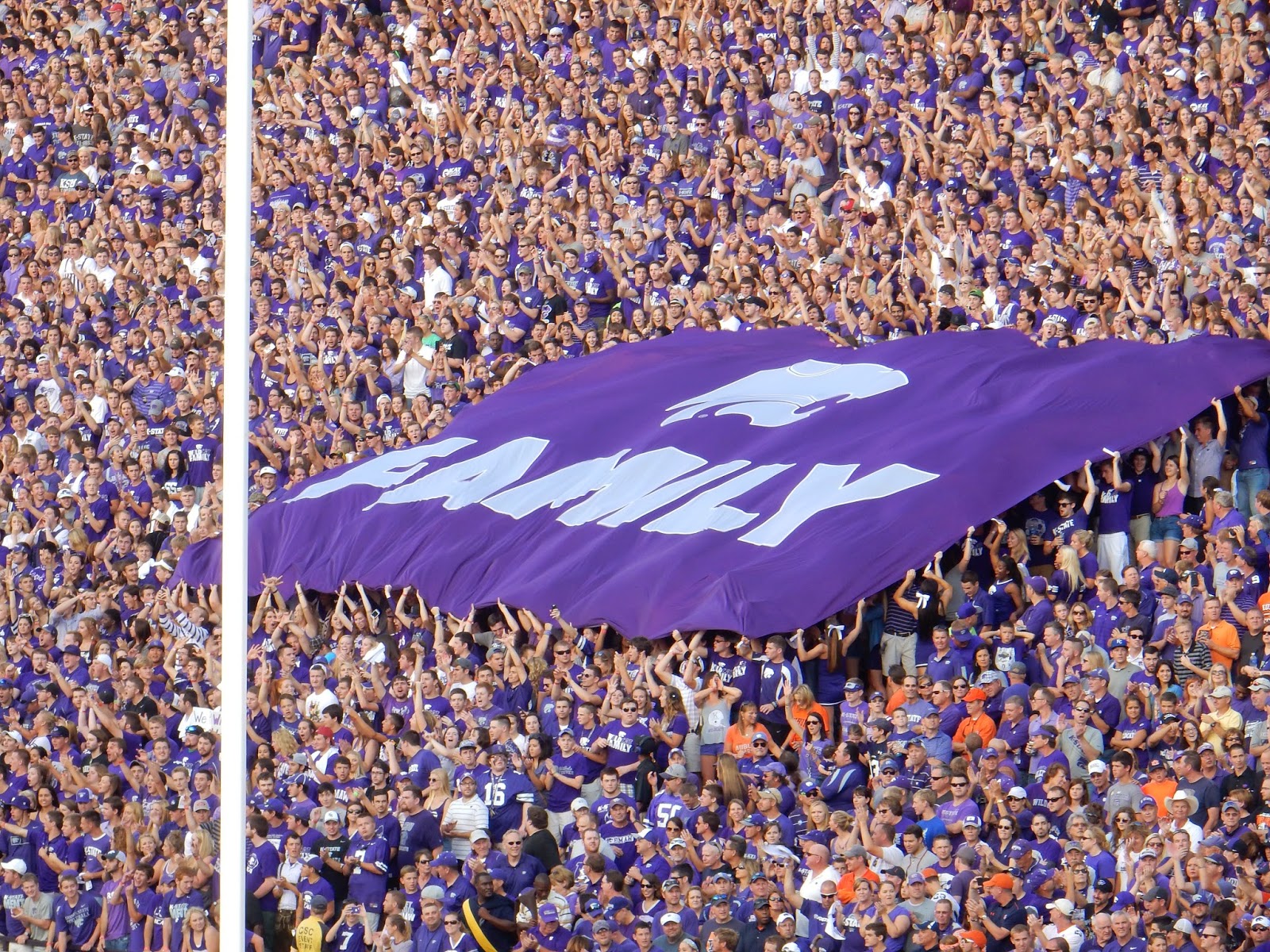 I'm proud to be part of the K-State family. 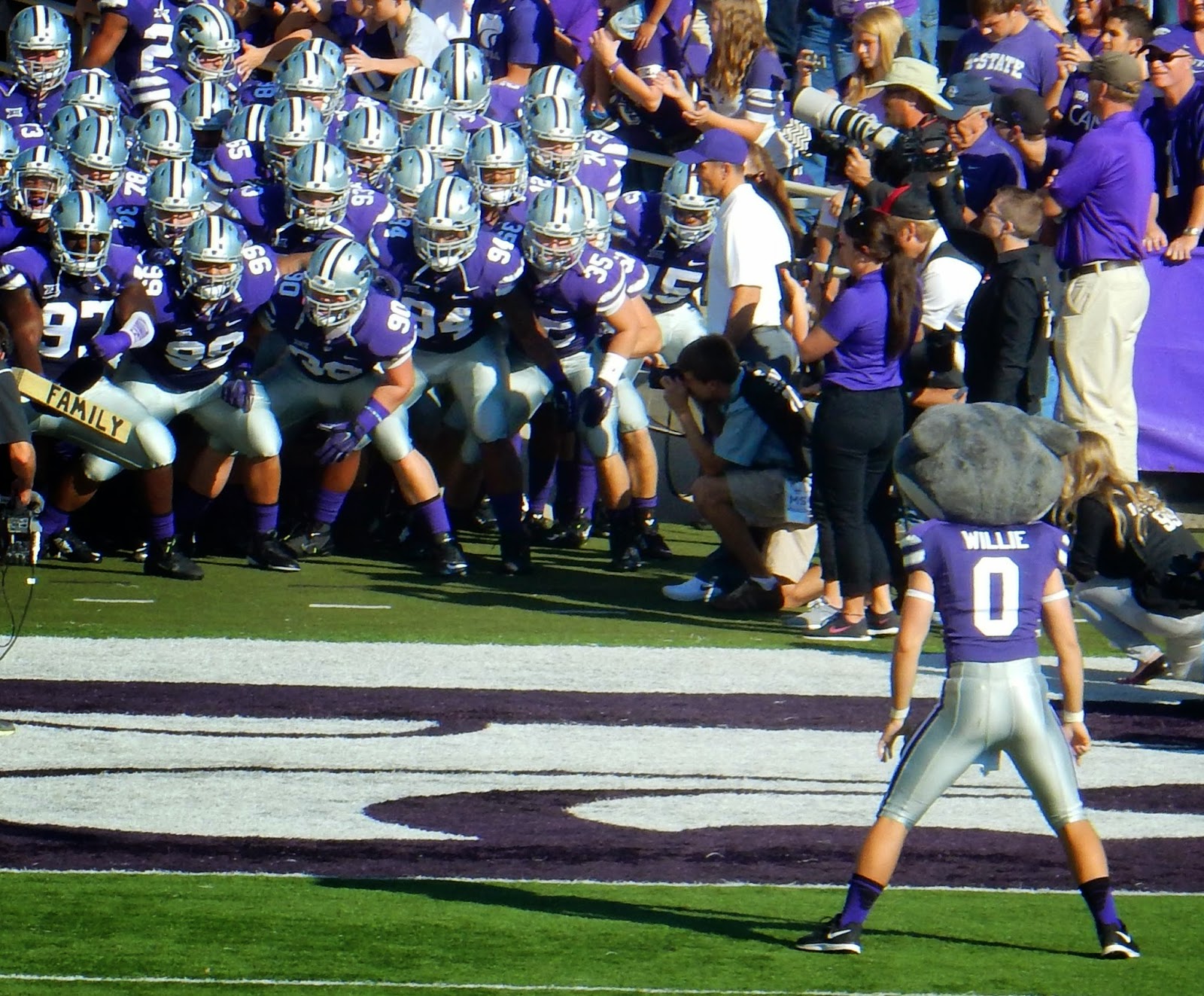 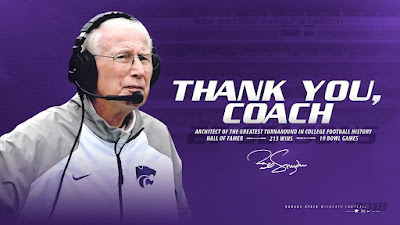 As it turned out, Randy & I made it to the end of Coach Snyder's final appearance as head coach. It was darn cold, but I'm glad I stuck it out to the very end.