To Infinity and Beyond: The Moon, 50 Years Later 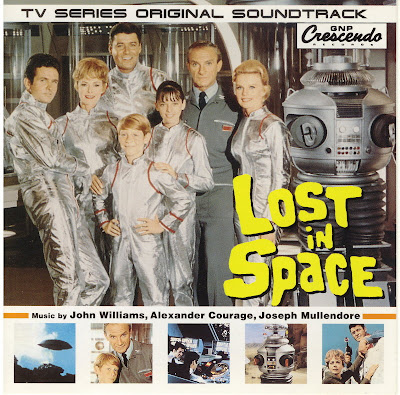 I was a Lost in Space addict as a kid. When I was 9, I tried to convince my parents we should name my new baby brother Don. They opted for Kent instead.

At the time, I just couldn't figure it out. Why wouldn't they want to name this newest member of our family after the dreamy Major Don West on my favorite TV show? 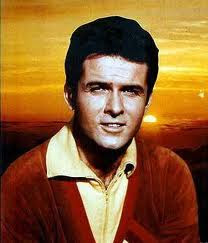 Well, I couldn't figure it out until I was in college and saw reruns of Lost in Space. Somehow this cherished TV series got a little cheesier in the ensuing years. It was definitely "B" movie material.

For those of you too young to remember, Lost in Space was a 60-minute, sci-fi series broadcast on CBS every Wednesday night. It was about the Robinson Family, Major Don West and their faithful robot who left Earth on the Jupiter II spacecraft. They were on a five-year mission to explore a planet in the Alpha Centauri star system. Unfortunately, Dr. Zachary Smith sabotaged the ship, throwing it off course and leaving the entire crew Lost in Space. Gasp! Each week, they traveled from planet to planet, searching for a way back to Earth.

They found plenty of aliens and danger along the way. You would have thought the object of my preadolescent crush would have been Will Robinson, the precocious 9-year-old in the series.

He and his friend the robot were always in the thick of the action, hence the often repeated phrase: "Warning! Warning! Danger, Will Robinson!"

I had just turned 12 when the real-life astronauts landed on the moon on July 20, 1969. I remember sitting on the floor in front of the bulky television console and watching as Neil Armstrong left the lunar module and walked on the moon, with Walter Cronkite narrating his every step. For one, it was after my bedtime, so that was a big deal. But even as a young tween, I felt the significance of America's achievement of being the first on the moon.

Evidently, it made a big impression on my late mother-in-law as well. By default, our basement became the repository for tubs of family photos and memorabilia when we cleaned out their house. 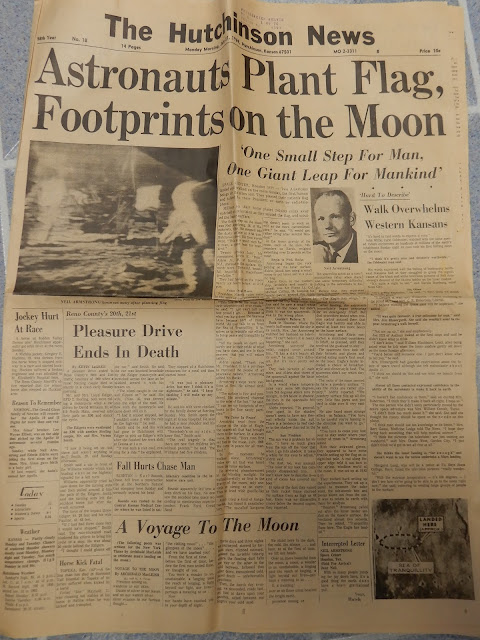 In the midst of the family photos, Marie had saved The Hutchinson News from July 21, 1969, the day after Armstrong made "a small step for man, one giant leap for mankind."

Ironically, I worked for nine years for that very newspaper after I graduated from Kansas State University. And we are still among the few who hold on to their subscription in these days of shrinking newspaper circulation. 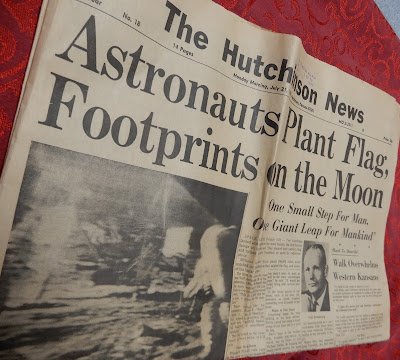 It is huge! It measures 16.5 by 22.75 inches. Today's paper is 11 by 22.5 inches. And the moon landing was a huge story in July 1969. Hundreds of millions of people had tuned into radios or watched the grainy black-and-white images on television as the astronauts set foot on the moon. It was haled as one of humanity's most glorious technological achievements. Police around the world reported crime came to a near halt that midsummer Sunday night.

And even though most people had been glued to their TV sets during the historic walk, I'm sure they poured over every word in their daily newspaper the next day, hoping to discover a new tidbit.

In an anniversary article published in The Hutchinson News this week, astronaut Michael Collins,
who orbited the moon alone in the mother ship while his capsule-mates strode on the lunar surface,  was struck by the banding together of Earth’s inhabitants.


"How often can you get people around our globe to agree on anything? Hardly ever. And yet briefly at the time of the first landing on the moon, people were united. They felt they were participants. It was a wonderful achievement in the sense that people everywhere around the planet applauded it: north, south, east, west, rich, poor, Communist, whatever."

Of the 24 astronauts who flew to the moon from 1968 through 1972, only 12 are still alive. Of the 12 who walked on the moon, four survive. A vast majority of Earth’s 7.7 billion inhabitants were born after Apollo ended, including NASA’s current administrator, 44-year-old Jim Bridenstine, who is overseeing the effort to send humans back to the moon by 2024.

One of the unique features of The News is the Intercepted Letter, which is found on each edition's front page. For awhile, new publishers did away with the folksy snippet. But it's back in 2019. 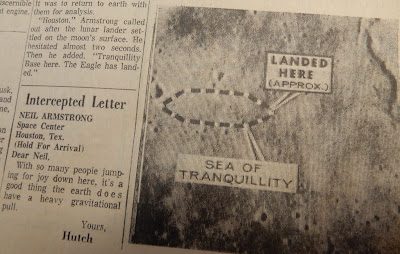 NEIL ARMSTRONG
Space Center
Houston, Tex.
(Hold for Arrival)
Dear Neil,
With so many people jumping for joy down here, it's a good thing the earth does have a heavy gravitational pull.

One of the stories was headlined, "They prayed for the astronauts." I'd be surprised to see a headline like that in a newspaper today. 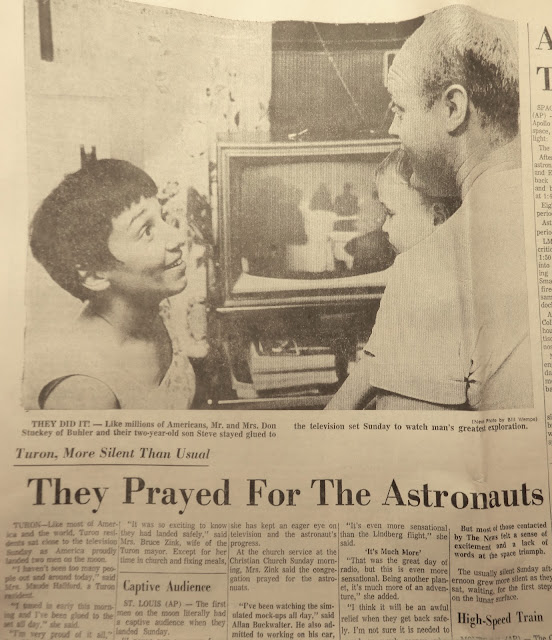 "I've been watching the simulated mock-ups all day. We went to church, but we have switched around to all the channels to listen to the commentary."

It's more sensational than the Lindberg flight.

A poem made it onto the front page, Voyage to the Moon by Archibald MacLeish. It reads, in part:

Presence among us
wandered in our skies.
Dazzle of silver in our leaves
and on our waters silver,
silver evasion in our farthest thought ...
"the visiting moon" ...
"the glimpses of the moon" ...
and we have touched you! 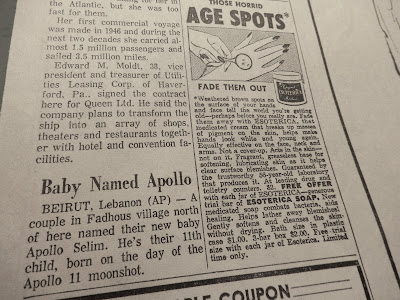 Just like these days, when new parents give celebrity names to their newborns, The News told of a little boy named Apollo, the 11th child born to a family in Lebanon on the day of the Apollo 11 moonshot. 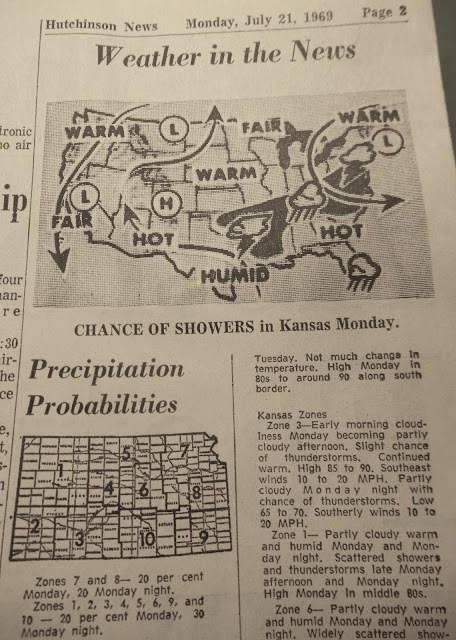 It's interesting to see what the weather was at this time 50 years ago, too. 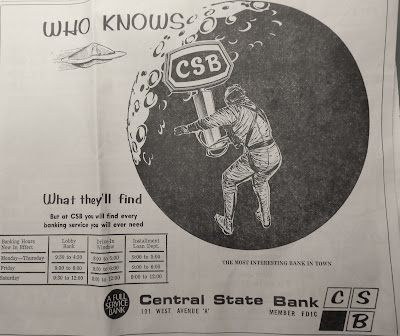 It was fun to look through the articles and the ads. A bank used a space theme that day in its display ad for banking hours. 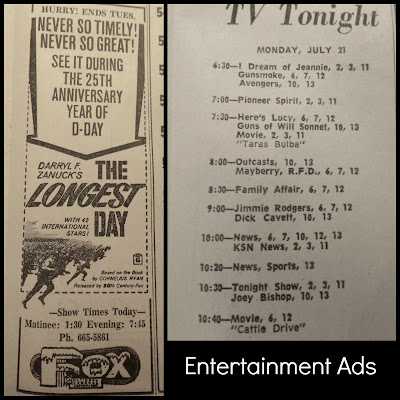 The television schedule shows that I Dream of Jeanie (another one of my childhood favorites) was on the television that night. That show featured Larry Hagman as an astronaut besotted with the 2,000-year-old genie/Jeanie, so it was appropriate TV fare for the evening. So were Mayberry, Here's Lucy, Gunsmoke and Family Affair.

The Fox Theater in Hutchinson wanted to advertise their air-conditioning it appears, with ice on their logo. They were playing a movie called The Longest Day and suggested seeing it during the 25th anniversary of D-Day. 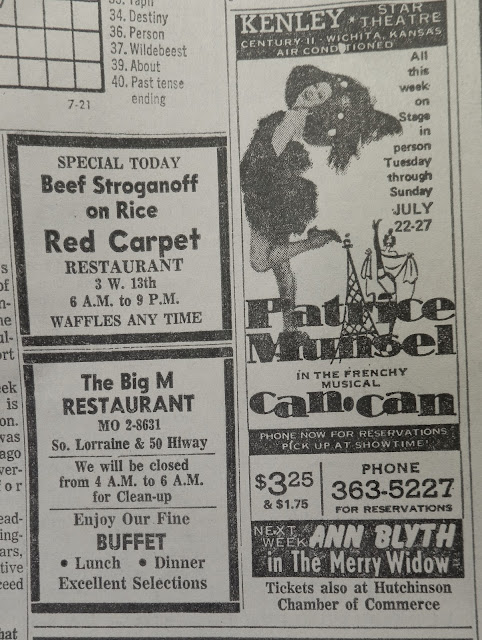 A Wichita theater advertised the "Frenchy" musical, Can Can. 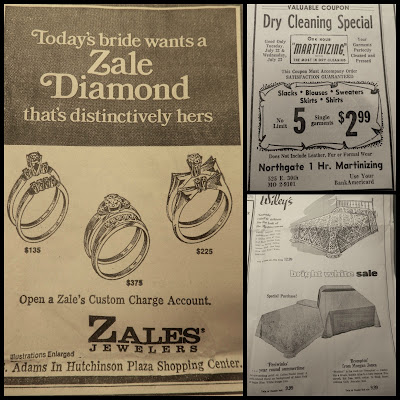 I couldn't believe the bargain price on wedding sets or the bedspreads available for less than $15 each. 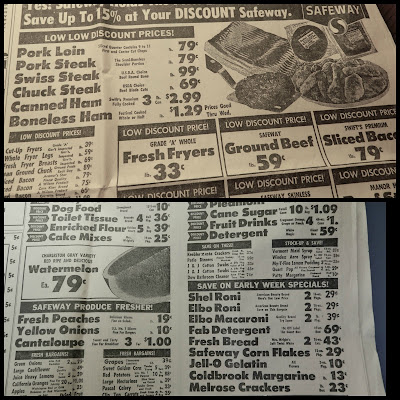 The prices on the grocery store ads created a little shell shock for this consumer of today. 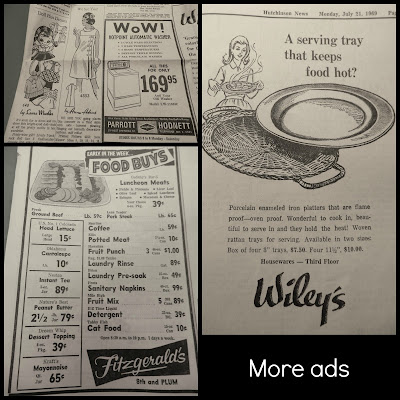 There were patterns for doll clothing and a woman's dress alongside an ad for a $169.95 automatic electric washer and a box of serving trays for $7.50 or $10, depending on the diameter, at the downtown department store. 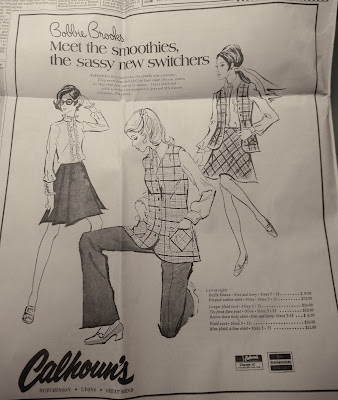 A Calhoun's ad shows what the well-dressed woman of the era was wearing.

But my favorite ad was the one for a dry cleaners and laundry. It definitely reflects the times when women were beginning to join the work force in greater numbers and were no longer fulfilling the June Cleaver stereotype of wearing pearls while doing housework. 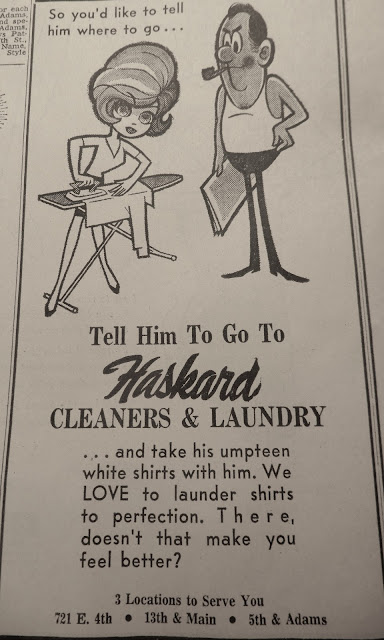 I know that downsizing is the recommended way to live life these days. And, after living 34 years in the same house, I can verify that a good purging would be a good idea. But, then, every so often, it pays to be a packrat.
Sometimes glimpses of our history show us just how far we've traveled.
Posted by Kim at 7:10 AM

Email ThisBlogThis!Share to TwitterShare to FacebookShare to Pinterest
Labels: 50th anniversary of the lunar landing, Lost in Space, moon landing, The Hutchinson News