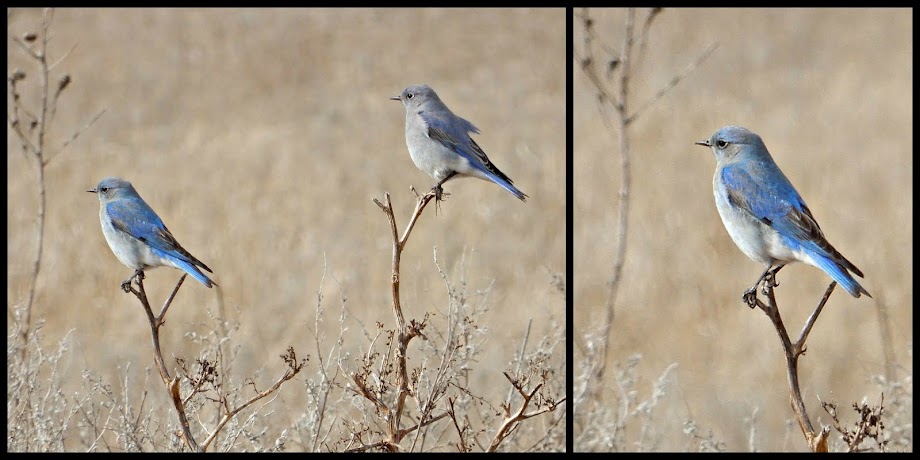 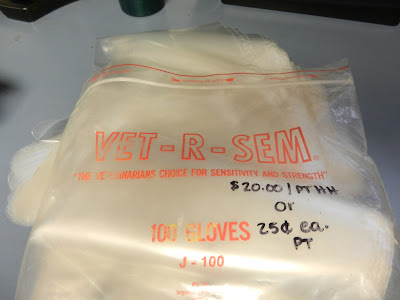 I have a new marketing scheme for the maker of Vet-R-Sem gloves. They could develop a niche market by visiting orthopedic doctors' offices and peddling their wares.

The gloves are used by veterinarians and ranchers for preg checking cows or for helping with difficult deliveries.

The gloves have gotten daily use at our house the past 2 1/2 weeks as cast covers. They are just the right shape for sliding over a cast prior to a shower. 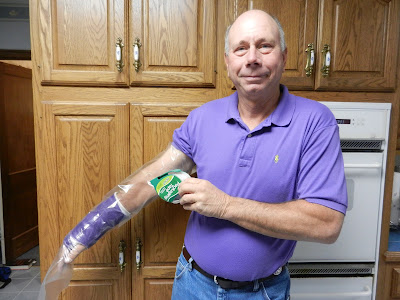 Add a little packing tape strapped to the top, and you have a waterproof cast cover.

Pretty ingenious. Yep, it was my idea. It's a whole lot easier than trying to figure out how to tape a garbage bag over said cast. 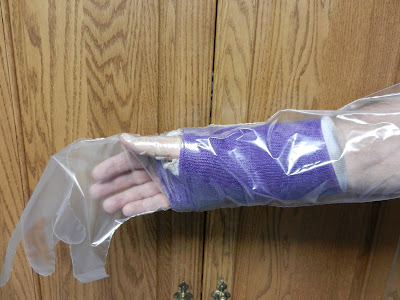 While Randy can't get his fingers down into the glove part, the plastic sleeves have served their purpose quite nicely, and he has avoided giving his cast a shower.

However, his cast looked like it could use a shower by the time we went to a follow-up appointment in Great Bend yesterday morning. 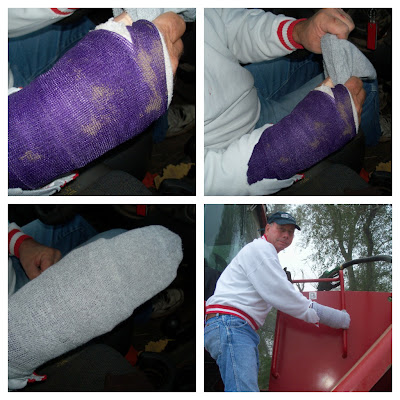 Randy's plan was to wear a sock over the cast when he did dirty jobs. However, it wasn't a fail-safe method. The cast was decidedly dingy by Randy's doctor's appointment yesterday morning. 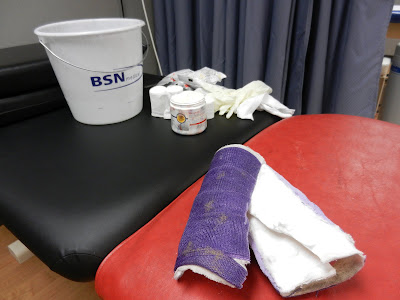 The X-ray showed that the cast had been doing its job - dirt and all. The wrist is still in line. Randy was hoping to leave the doctor's office cast-less. I went to the appointment to make sure Randy confessed how busy he is and how much he's attempting to do, even with a cast.

Dr. Hildebrand grew up on a farm not too far from here, so I probably didn't need to "tattle" on my hubby. But, nevertheless, Randy is back in purple after a brief reprieve for the X-ray. He contemplated switching to camouflage or to red and black for the Stafford Trojans. But, in the end, he went with purple so he'll be game-ready for the Sunflower Showdown this weekend.

He was in a purple cast when we beat OU. He didn't want to take any chances.

And for you marketing execs at Jorgensen Labs? When you start visiting orthopedic offices and selling your gloves, remember you heard it here first. You're welcome.
Posted by Kim at 6:44 AM