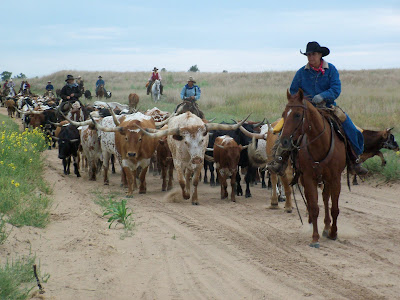 She is the Pied Piper of longhorns, gently calling the behemoth-horned steers into a journey that blends past and present.

As 210 longhorns crested a hill, it looked like a scene from a century gone by. A cloudy and cool September morning was punctuated with sunflowers waving in the Kansas breeze as Carmen Schultz led the way along with a longhorn named Roger. The Medford, Oklahoma, cowgirl is among the 35 drovers who are making the three-week Kansas Cattle Drive in honor of Kansas' 150th birthday. 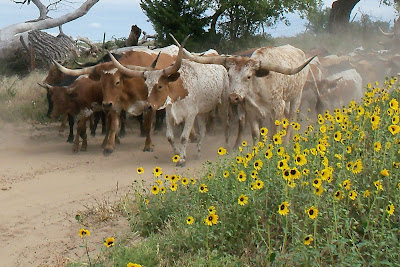 They began the journey on Labor Day weekend in Caldwell and will end September 24 in Ellsworth. They are loosely following the Cox Cattle Trail, named for William M. Cox, a general livestock agent for the Kansas Pacific Railway Co. in the 1800s. By 1871, Ellsworth was a mecca for cattle drives, with more than 30,000 head of cattle shipped through the central Kansas town.

In days gone by, I suppose the locals were accustomed to watching cowboys herd longhorns from Texas past their own pasture fences on their way to market. These days, the out-of-state visitors in our area are more likely to be toting guns for recreational hunting, rather than using them to kill a jackrabbit to cook over an open flame for nourishment on their way to a Kansas cattle shipping outpost as they would have in the 1870s. 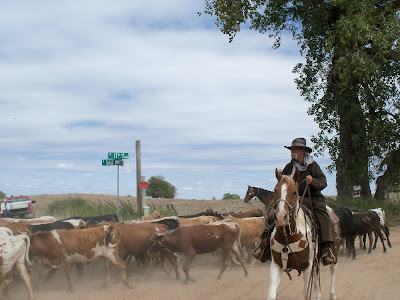 (You can see Randy on the pickup bed in the background - a blend of new and old!)
On Wednesday, Randy and I joined other sightseers to witness a cattle drive reminiscent of those our Kansas ancestors may have seen a century ago. A wagon with a matched team of horses led the way over a hill just south of one of the pastures near Quivira National Wildlife Refuge, where part of our cow-calf herd has spent the summer. 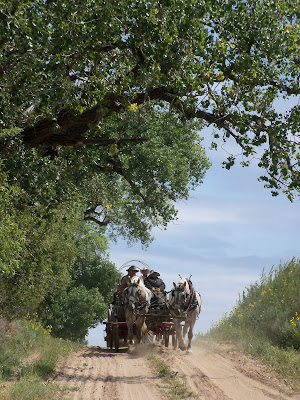 The cowboys at the back of the pack had a sign to the refuge's visitor center to point the way. (Of course, they could also have followed the hoof prints down the sandy road.) 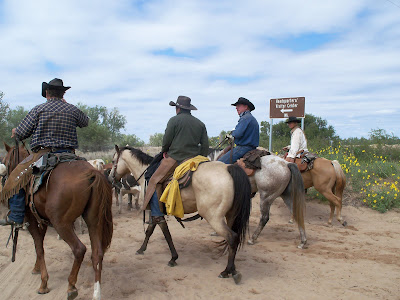 To read more about the journey and "meet" the trailhands, visit the website for the Kansas Cattle Drive 2011. And come back here tomorrow for more of my glimpses from the cattle drive. 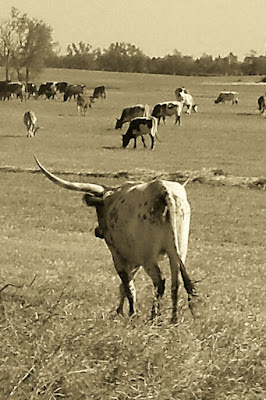