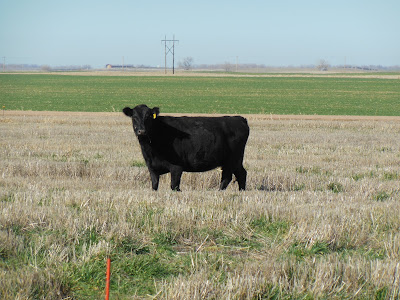 As we humans feast on leftover turkey and remnants of pumpkin pie, our bovine neighbors are cleaning up the leftovers, too.

While we clean up the dollop of mashed potatoes and the few remaining dinner rolls, the cows are gleaning the leftovers from the 2012 wheat harvest as they munch on volunteer wheat coming up in stubble. 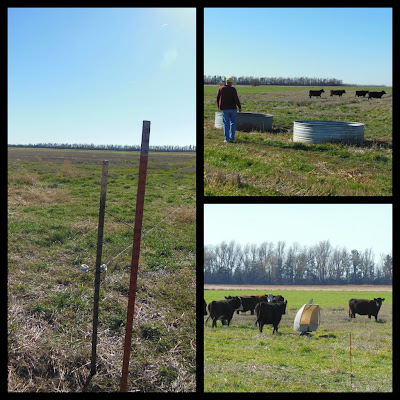 The guys put up electric fence to keep them contained. They also moved water tanks and a mineral feeder to the field. Every day, either Randy or Jake go around the electric fence on a 4-wheeler to make sure that the deer haven't run through it, giving the cattle an escape route. They also replenish the water and mineral as needed.

Earlier this week, we moved the group from one field of volunteer wheat to the location of their next "buffet." It is Thanksgiving week, after all, and the pickings were getting as sparse as that picked-over turkey carcass. The cows might as well feast at a plentiful Thanksgiving table, too, right?

It was the perfect day for a 4-wheeler round-up - temperatures in the lower 70s and no wind. I got to ride one 4-wheeler and Randy was on the other. Jake was trying to coax them to follow the pickup, which had hay in the back. There aren't many photos of the round-up. Cameras and 4-wheelers are both designed for right-handed people. So, even though I'm left-handed, it's hard to click the camera button while using your right hand on the 4-wheeler throttle. Plus, you don't do a lot of sitting still to focus while trying to get cattle to move.

The cattle took a few detours. One was an unexpected one into an alfalfa field, which really didn't look that appealing to the human eye in its fall, non-lush state. The other was more expected. The thick greens offered up in a field with the 2013 wheat crop looked like that tasty green salad on your Thanksgiving table (At our holiday celebration, that yummy green salad was made by my sister, Darci, and had brussels sprouts, dates and more, but I digress.)

Randy and I had to do a little waving of our arms and our trademark, "Hey, hey, hey!" to get the cattle to move on. (You can see the pickup in the background that they were supposed to be following!)
But they eventually made their way into the field of volunteer wheat, and they've been dining there ever since. I wonder if they are as full as I am after eating my Mom's dressing. 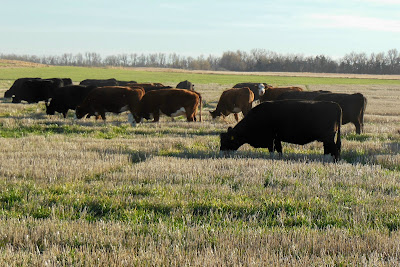