The falling star winked at me and was gone in the wintery, dark sky just as suddenly as it appeared. I was driving home from church choir a week ago. The star fell into my vision just after I turned onto the Zenith Road.

As usual, I was scanning the road, right to left and back again, trying to avoid a nighttime collision with a deer. And, yes, just a half mile later, a doe with eyes glowing in my headlights stood in the right-hand ditch.

A falling star isn't something that can be captured in the single click of a camera shutter without benefit of a tripod and timer ... and even then, there are no guarantees. In reality, the star's path into my field of vision began and ended in the same breath.

Randy asked me later, "Did you make a wish?"

The next day or so, this quote appeared in my daily devotional email from Guideposts. And I again thought of that elusive falling star.

I believe God embedded the miraculous in the ordinary,
and it is our task to discover it and celebrate it.
–Kent Nerburn, author
Too often, we're too busy to find the miraculous in the ordinary. Do I really want to go outside in the cold and take a photo of a sunset? But, after day after day of gloomy, cloud-covered skies, it was a treat to see color appear in the western sky one evening this week. 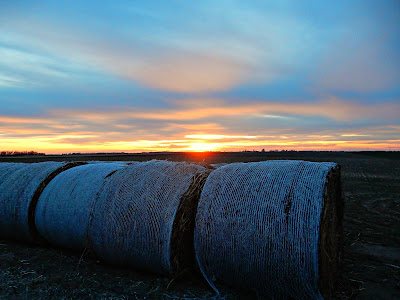 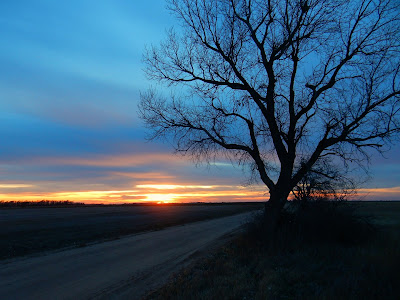 The scene was prettier than the photos. Sometimes, you just have to be there ... kind of like that night with the falling star.

But it's definitely worth opening my eyes to the beauty that's there ... however fleeting.

If you’re awake to the poignant beauty of the world,
your heart breaks regularly.
In fact, your heart is made to break;
its purpose is to burst open again and again
so it can hold ever more wonders.
–Andrew Harvey, author
Posted by Kim at 7:41 AM