The Bigger They Are, The Harder They Fall 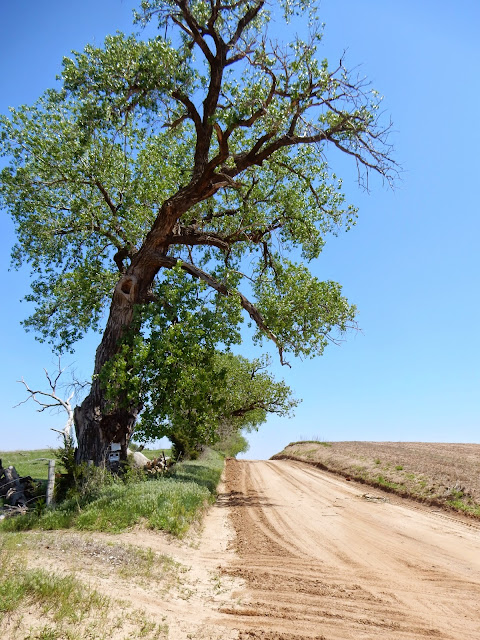 Perhaps you have noticed that even
in the very lightest breeze,
you can hear the voice of the cottonwood tree.
--Black Elk

The big old cottonwood tree has had a supporting role in many a photo on the County Line. 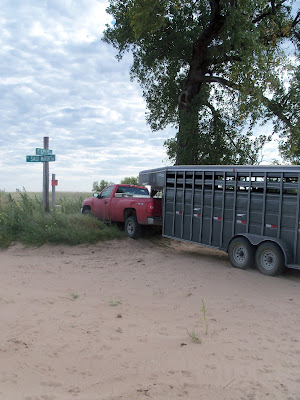 As we've taken cattle in and out of the pasture we call "Palmer's," it has stood as a sentinel to our comings and goings just beyond the southwest gate. Its stance at the bottom of a cottonwood-tree-lined hill made it the focal point for photos as Randy would go back to close the gate and I'd step out of the pickup to document its fall or summer "outfit." 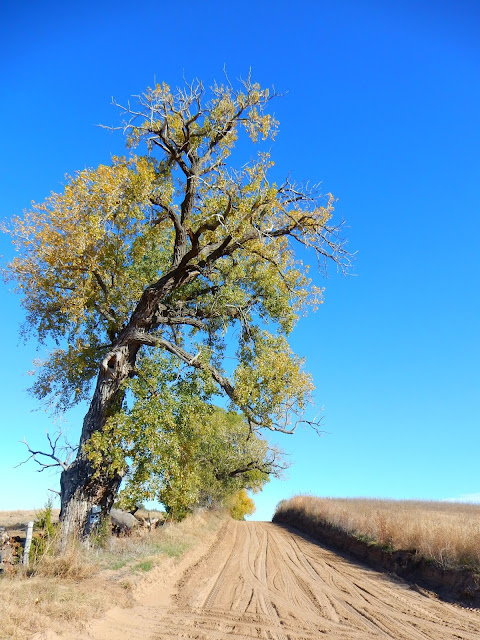 But a mighty wind felled the mighty cottonwood Friday night. 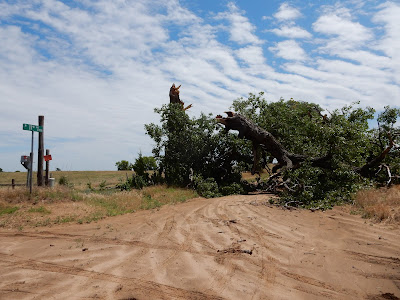 The weather ticker at the bottom of the TV screen Friday night said there were 58 mph winds at Quivira National Wildlife Refuge. That gave a definition to the howling I could hear outside my living room windows. I'm always a little concerned when the wind screams ferociously. Our house is nestled among many old trees. Someday, I envision one of them crashing into the roof. This time, our homestead trees survived. But one of my favorite cottonwoods did not. 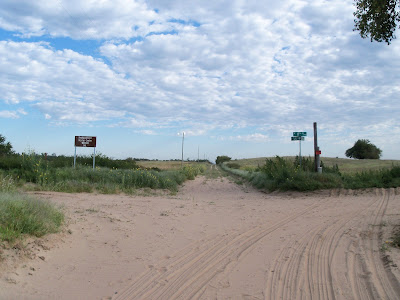 The cottonwood stood just across the dirt road from this Quivira National Wildlife Refuge sign, "Headquarters, Visitors Center, 1 mile." (You can see the old cottonwood's leaves in the upper righthand corner of this photo from 2010.)

But it will no longer stand at attention as visitors drive to the refuge or as we make trips to the pasture. Look closely at the photo below and you'll see Randy in the center. 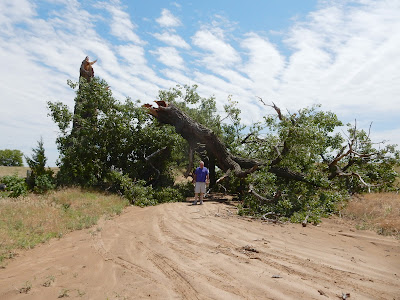 That gives a better gauge of the massive size of the old cottonwood tree. 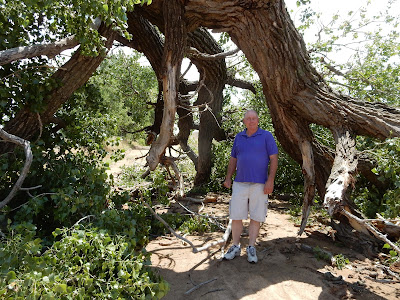 The tree snapped apart and completely blocked the road. 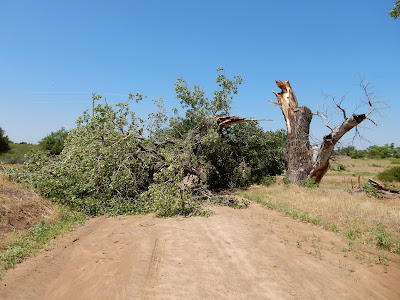 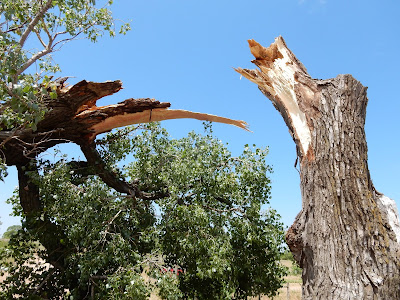 Randy didn't think our loader tractor could do the job of moving the massive trunk, so he called the township board. They already had it taken care of by Sunday evening. 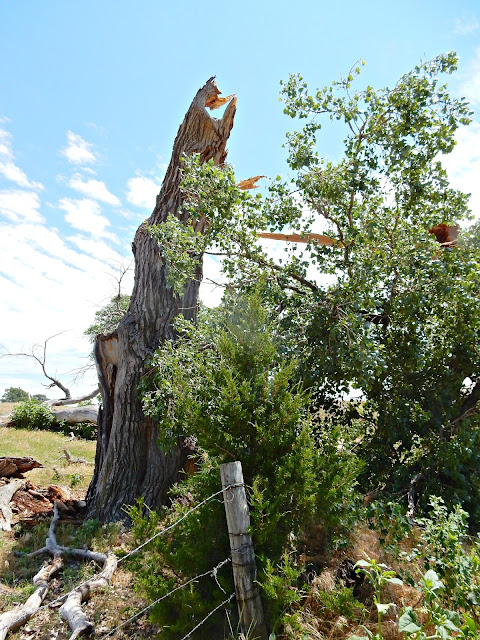 We can't believe it didn't squash the fence when it crashed to the ground.
More cottonwood trees line the road to the east. They survived this round of storms. As I stepped through the fallen branches, I realized that the cottonwood leaves that I'd used to frame many photos on the lefthand side were now framing the righthand side of the shot. . 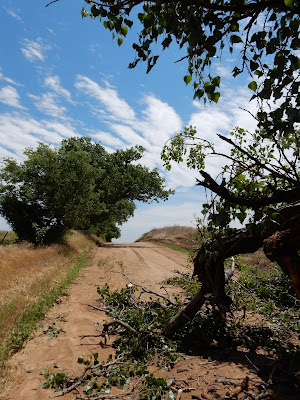 Here the old cottonwood was decked out in its fall finery during one of our trips to take cattle to the pasture. 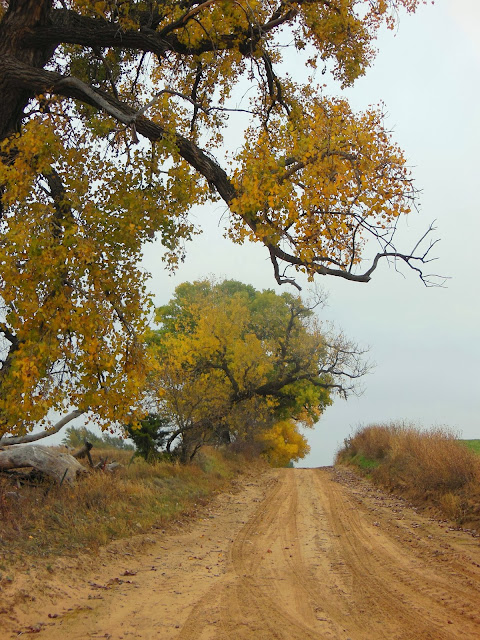 I have a lifetime love of cottonwoods. At my childhood home, an old cottonwood stands near the south driveway. The cottonwood tree has been one of the first things visitors see as they approach the farmstead and one of the last things you see silhouetted by a sunset sky at night.

Mighty cottonwoods form a canopy down many a country road in rural Kansas. Early Kansas settlers found the native trees as they arrived from the eastern U.S. When the Kansas Legislature chose the cottonwood (Populus deltoides) are the state tree in 1937, the proclamation read:


"Whereas, if the full truth were known, it might honestly be said that the successful growth of the cottonwood grove on the homestead was often the determining factor in the decision of the homesteader to 'stick it out until he could prove up on his claim'; and Whereas, The cottonwood tree can rightfully be called 'the pioneer tree of Kansas.' "

They are like the old family patriarch - tall, stately, but maybe a little rough around the edges after years of standing through the changing seasons. Just like the road to the Palmer pasture, many a country road is lined with these big old trees, which seem to wave a friendly greeting in the Kansas breeze. On early morning or late evening trips to check cattle, the cottonwood's leaves rustle and birds serenade from their branches. Their attire changes with the seasons - whether clothed in green for summer or in yellow finery for fall or stark and drab in winter's solemnity.

In 2011, the Kansas Cattle Drive herded longhorns down the road and past the cottonwood as they traveled to Quivira for an overnight stay. 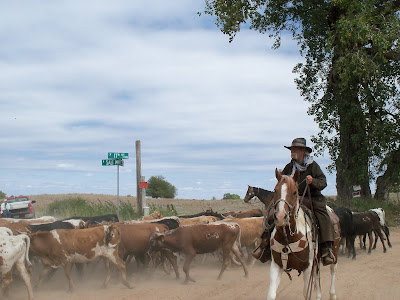 The old cottonwood had towered over the longhorns and the riders as they traversed the dusty road. 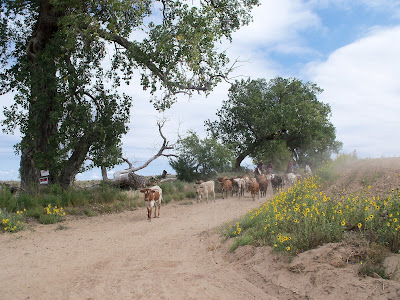 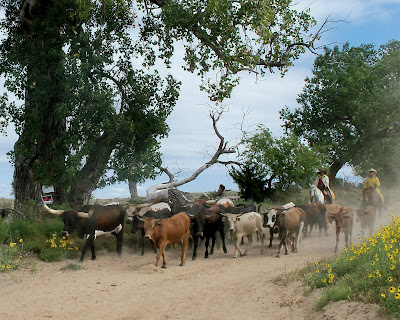 Goodbye, old friend. It's been good to know you.