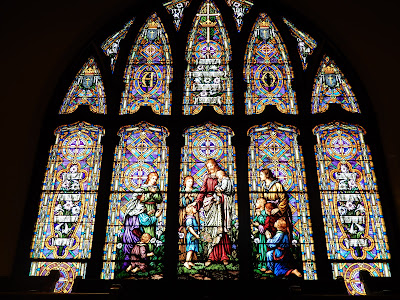 Last Monday, I was downloading photos from a weekend trip to Manhattan. While I waited, I opened up an email devotional from Guideposts. And there is was: 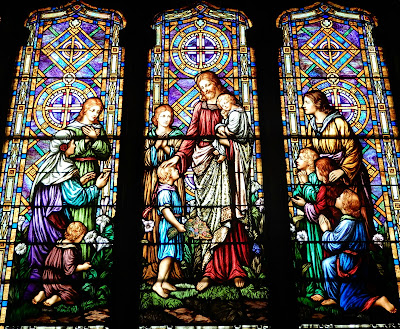 Earlier in the service, the grandparents had joined the children at the front for children's time. We got to sing several Sunday School songs, including "This Little Light of Mine." 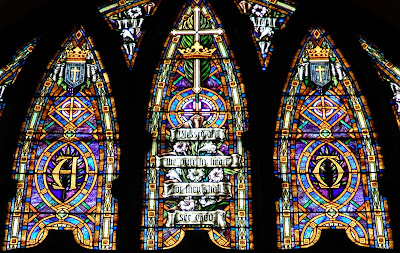 While singing, I committed a faux pas. I was enthusiastically singing and didn't realize that their version differed from my childhood version and the one I'd taught to young worshipers at Stafford UMC when my kids were little.

It was kind of like that moment when you're saying The Lord's Prayer at a different church and forget that they may say "forgive us our debts" instead of "forgive us our trespasses." I was a little embarrassed, but the leader graciously gave me a smile, and I corrected it in the "Hide it under a bushel - no!" verse.

But as I've looked at those photos of the stained glass later in the week and thought about the devotional, I've looked at my "mistake" a little differently. Stained glass is created when glass is broken into smaller segments, then carefully pieced back together. The final result is a sum bigger than its parts.

And that can describe my life, too. Jesus takes all those broken pieces and puts them together. Then He wants to let his Light shine through me. Does He want us to hide that light under a bushel? No! as the children will gladly tell you. 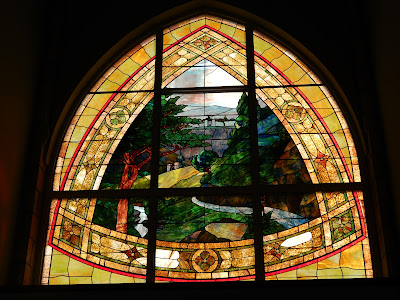 After the church service, we accompanied the girls to their Sunday School rooms so we could see that part of their church life, too. As we stood in the foyer after delivering them to their classrooms, I snapped a photo of another stained glass window there. When I tried to find information about the history of the windows, I happened across a story on its origin. The window - which is called "The Link" - was "resurrected" when the building addition was completed just a few years ago. This old stained glass window had spent years in a coal bin from an earlier church that was on the site.

For years, the light didn't penetrate the glass. It was in parts and pieces and hidden away in a storage room. It didn't come back to life until hung in a sunny atrium and light shone through.

Across the foyer, there was a pile of cleaning buckets. They were ready to be loaded out and taken to the Great Plains UMC Conference Office. Our UMC Bishop, Ruben Saenz, had challenged Great Plains United Methodists to fill 5,000 buckets which would go to hurricane relief in Texas, Florida, Georgia and other areas impacted by storms.

I didn't count how many buckets were sitting in the foyer. I should have. But there were probably at least 20, and Jill says their church eventually contributed 75 or so. And while we were in Manhattan, our small three-point UMC charge in Stafford County was also collecting buckets and/or contributions of $65 which would fill one kit with cleaning supplies, gloves, clothesline, sponges and more.
Our little church collected 7 filled buckets and enough money to fill 23 more! Along with contributions from St. John and Antrim - the other churches in our three-point charge - there were a total of 9 buckets and enough money for 32 buckets.

As of Friday, a total of 5,001 buckets had been collected by United Methodist churches - big and small - from across the states of Kansas and Nebraska. I don't think the monetary contributions are included in that count, but the money raised also will go to UMCOR - United Methodist Committee on Relief. In fact, UMCOR uses 100 percent of the donations it receives to help victims. Administrative costs are covered from other church resources. (Compare that to other relief organizations!)
As I've thought about those relief efforts and remembered the stained glass window quote, I've also thought more about the other songs we sang during children's time. One was "Jesus Loves the Little Children." Another was "He's Got the Whole World in His Hands."

And I remembered another stained glass window photo I'd taken at the Youthville campus many years ago. 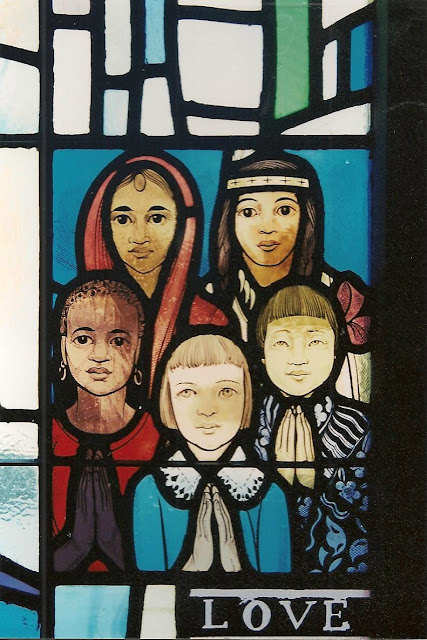 In this world that seems so divided and confrontational, it's good to be reminded of the things we can do when we work together ... and when we have the faith to let the Light shine through us. It might come in the form of a cleaning bucket.

Without faith, we are as stained glass windows in the dark.
--Anonymous
And if we forget, all we need to remember are little voices singing, "He's Got the Whole World In His Hands."