Our Mugs Visit Their Mugs 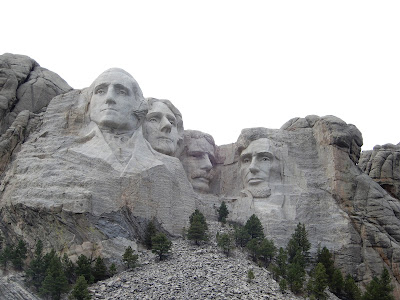 "... let us place there, carved high, as close to heaven as we can, the words of our leaders, their faces, to show posterity what manner of men they were. Then breathe a prayer that these records will endure until the wind and rain alone shall wear them away."
Gutzon Borglum, Mount Rushmore sculptor, 1930

As a former newspaper Focus editor, I often had to incorporate "mug shots" into the pages I designed. There were people celebrating milestone birthdays, others marking 50 years or more of marriage and young couples just starting on their matrimonial journey.

Mug shots - or the dreaded "grip and grin" shots from a ribbon cutting or awards banquet - weren't the preferred illustration for newspaper editors. We much preferred action shots or unusual angles ... the photos that made the reader stop for a second look. (Of course, those head shots with anniversaries and weddings and such were probably the best read of the section, if I'm honest. People like seeing their friends and family in newsprint.)

But I couldn't resist having a stranger take our "mugs" visiting the "mugs" of a rather famous four guys in American history.  I returned the favor for several fellow tourists.

A trip to Mount Rushmore was not on the docket this September. However, Randy's brother was in the hospital in Rapid City, and Randy wanted to make the trip to South Dakota. After his brother was transferred to Montana for additional rehabilitation, we became tourists for the afternoon. 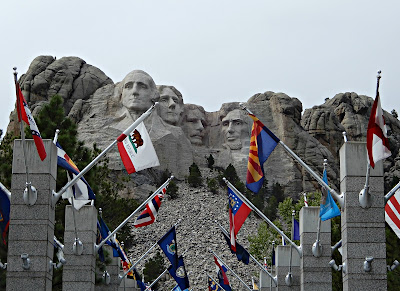 The day was gray, but the rain held off until after we'd been up and down the steps and trails that gave us different angles to view the monument. 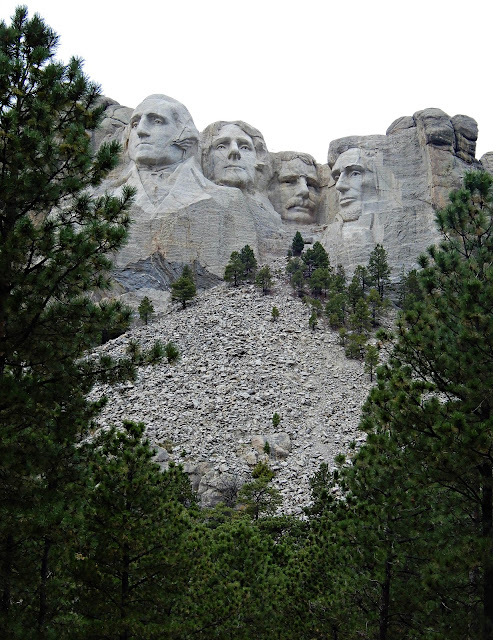 And I realized that while Borglum didn't have modern contraptions, he had something much more valuable: He had vision. He could "see" through the layers of rock. And he had the skill and determination and intestinal fortitude to make it happen. 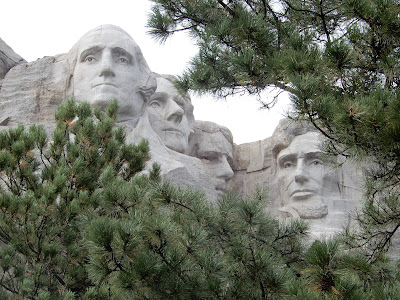 As with many monumental projects, not everybody was on the same page at first. In 1923, Doane Robinson, the superintendent of the South Dakota State Historical Society, had envisioned a massive mountain memorial carved from stone so large it would put South Dakota on the map and bring tourists by the carload. Robinson was dreaming of Western figures such as Chief Red Cloud, Buffalo Bill Cody, Lewis and Clark and other Western heroes. 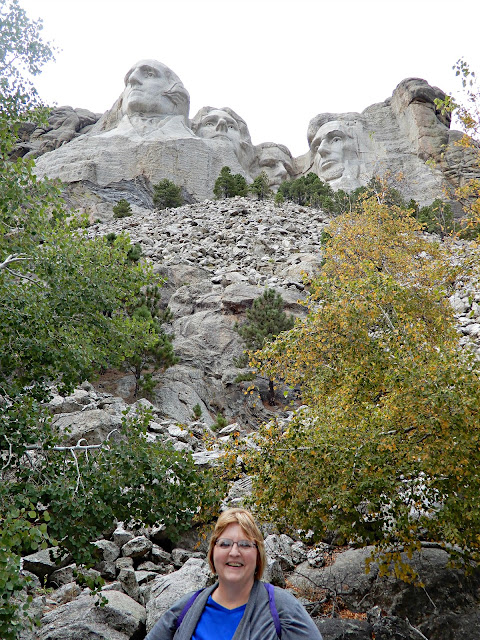 But Borglum didn't share that vision. The outspoken sculptor told Robinson that his life's work would not be spent immortalizing regional heroes. Instead, he insisted the work demanded a subject national in nature and timeless in its history.

By selecting four presidential figures for the carving, Borglum wanted to create a reminder of the birth, growth, preservation and development of a nation dedicated to democracy and the pursuit of individual liberty.

In these days when the nation seems so divided, those ideals are worth remembering, don't you think?