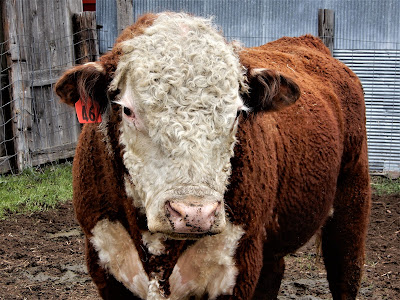 I read an article not long ago about new facial recognition technology for cattle.

On a recent day in the cattle pen, we weren't trying out the latest technical advances from our alma mater, K-State. But the article said that the university is capitalizing on the power of artificial intelligence to build a database for the cattle industry.

Like humans, each bovine has a set of unique facial features that modern technology can scan and later use to track the animal throughout its lifetime. According to K-State extension beef cattle specialist KC Olson, who helped develop this idea, the technology is based on the geometry of the human face. It uses intricate biometric measurements to put a permanent identification on a person and is capable of nearly 100 percent accuracy.

I couldn't help but think about that as we were testing bulls last week. That day, our veterinarian Dr. Bruce wasn't paying a lot of attention to the facial end of the bull. Most of the attention was focused on the opposite end.

However, each bull - and cow - has its own personality and characteristics. 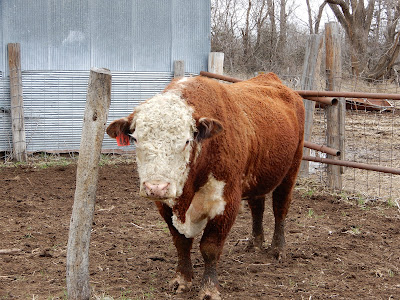 This guy, for example, likes to have his head rubbed when Randy feeds a hay bale. 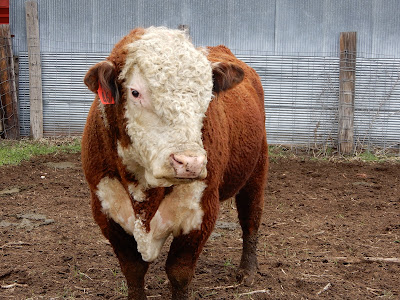 As I was standing there, I couldn't help but notice his white chest, too. He is unmistakably the daddy for No. 012, born in February a year ago. I used this photo on Valentine's Day 2020.

Now, No. 012 is one of the heifers who will calve for us in the winter of 2022. As she comes up to the bunk for feeding, I still recognize the heart shape on her chest. This morning, she and her cohorts will go through the cattle chute for the next step in their journey toward motherhood next winter.

Anyway, the new computer technology came about as Olson and a group of K-State experts in computer engineering, veterinary medicine and animal science began discussing how to apply facial recognition technology to cattle. Then, last fall, the research group made short videos of 1,000 feeder cattle that were restrained in a chute, taking a panoramic view of each calf’s head. From the videos, computer engineers parsed individual images and uploaded it to a neural network.

Once the pictures are loaded, Olson said, the system “teaches itself which of the biometric measurements are critical.” The K-State team recently tested the reliability of the network, also using images of cattle already in the system. Olson said it was accurate 94 percent of the time.

K-State is working with Kansas City-based company Black Hereford Holdings to build a smartphone app called Cattletracs,which will allow producers to submit pictures of their cattle. The app is due to be released soon, though its full capability is not likely to be in place for several months.

When we unloaded our feeder cattle in Pratt this winter, there was a "be on the lookout" notice for stolen cattle. Maybe this new facial recognition invention will ultimately help with that. 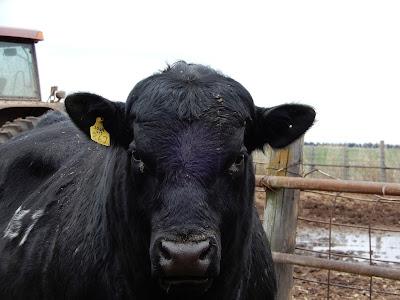 But, in the meantime, this big guy seemed ready for his close-up, too. 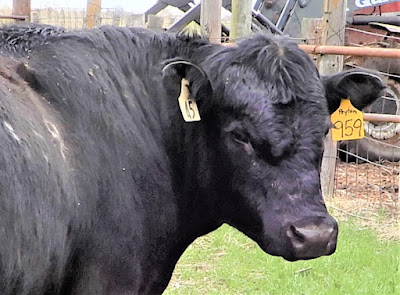 His fellow Angus buddy was a little more camera shy. (He hasn't been around here quite as long. He doesn't have the paparazzi schtick down as well yet.)

But, as I said, their faces weren't the real reason we were there. 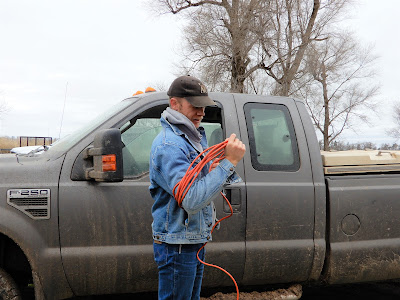 And it wasn't for a lesson on extension cord rolling - though that was a topic of the morning, too. (I've decided it's kind of like folding fitted sheets.)

No, we were there to make sure the four bulls were ready for their "job" this spring and summer. Quality bulls are a big part of the beef business. It's a good management practice to test bulls before you turn them out into the pasture with the heifers and cows each spring. Bulls have no value if they can't perform. 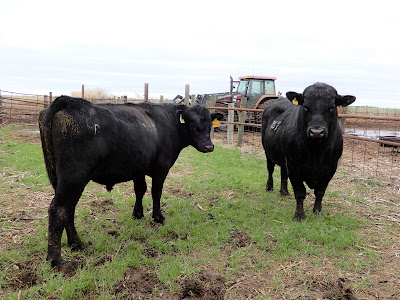 This time, Dr. Bruce brought along his own new portable working chute. In the past few years, our larger bulls have outgrown our home chute. Dr. Bruce's chute is wider, giving more room for the girth of the bigger boys. 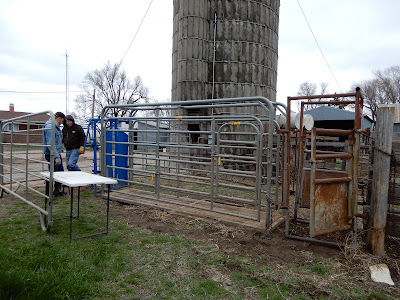 Once the chute was set up, the rest of the routine was familiar. 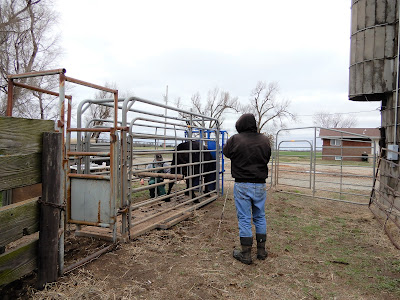 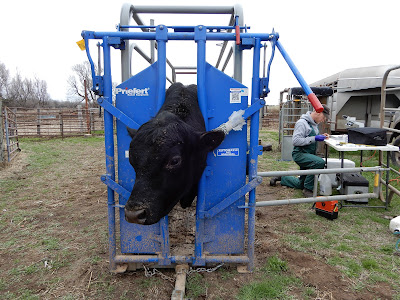 Dr. Bruce measures the scrotum and checks for defects. The extended period of sub-zero temperatures this winter was a concern for cattle producers - not just for baby calves but also for bulls. So it was especially important to test this year. 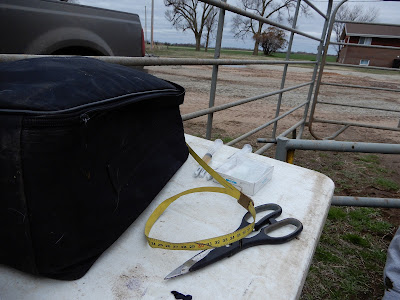 The bull is electrically stimulated so that the veterinarian can obtain a sample. 'Nuff said. 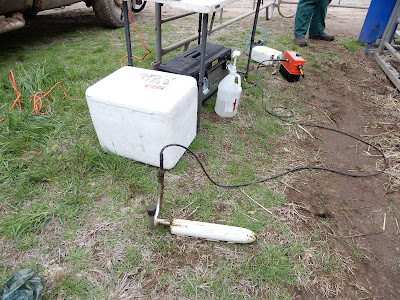 The sample is tested for motility, its "swimming" ability to travel to the cow's egg. 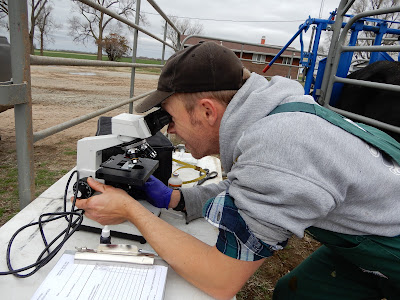 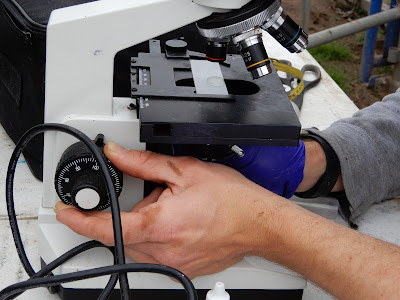 Dr. Bruce then smeared the slide with a dye, which killed the sperm. He could then look at morphology, the shape of the sperm. He was looking for abnormalities in the shape, which could indicate a problem with the ability to breed. 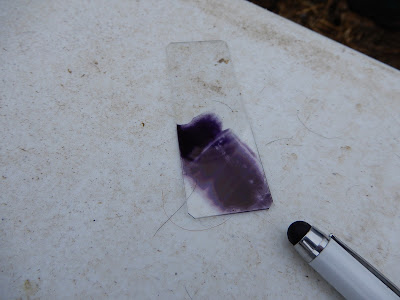 After the successful tests, Dr. Bruce gave each bull vaccinations to keep them healthy during their summer in the pasture. 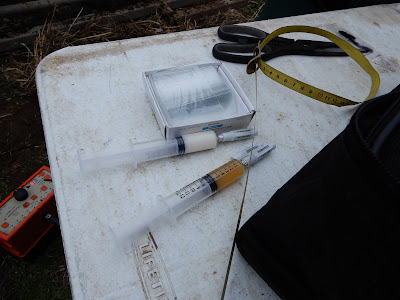 It's similar to giving our children vaccinations for their optimal health. 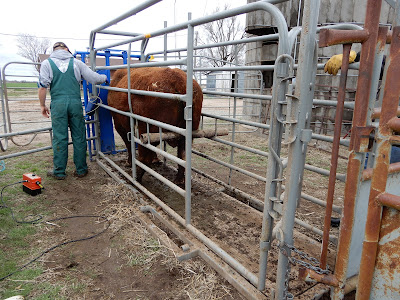 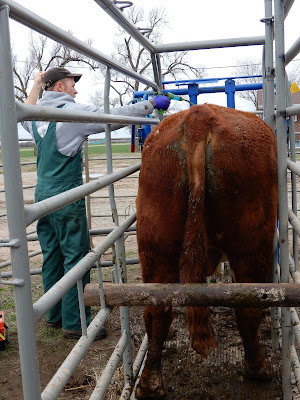 All the bulls passed and are ready for action, so to speak. 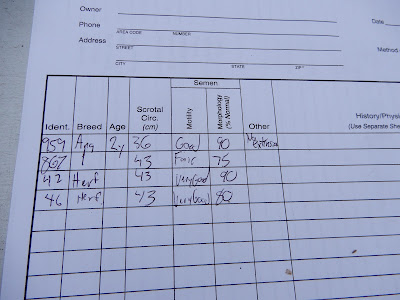 After their doctor's appointment, the bulls were hanging out in one of the lots. But after we get done with the heifers this morning,  they'll be heading for greener pastures with their lady friends.