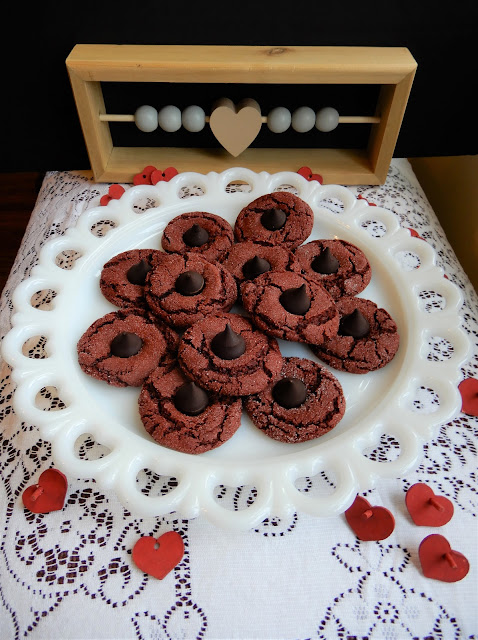 If you're a fan of the Food Network, you've probably heard southern competitors on baking shows lay claim to the Red Velvet phenomenon.

Just like most things these days, there appears to be a difference in opinion about that. But no matter the history, these Red Velvet Cookies are a pretty and tasty addition to cookie platters.

I've made Red Velvet Cakes and Cupcakes before, but when I was looking for ideas for a bridal shower, the Red Velvet Drop Cookies from Sally's Baking Addiction caught my eye. The bride-to-be has selected a palette of burgundy, pinks and blush, so I thought the red-tinged cookies would be a pretty addition to the cookie trays for her shower.

The ancestry of the classic red-tinged cake may not actually be the South. Velvet cakes became popular in the 1800s when American cooks began using almond flour, cocoa, or cornstarch to break down the protein in flour. From those modifications, a finer textured cake emerged – dubbed velvet cake. That innovation was followed by sister cakes, the mahogany cake and devil’s food cake.

Controversy over the color of the cake is still debated: Some believe it’s caused by a chemical reaction between the cocoa and acid, while others attribute the brown sugar, originally named red sugar. Then, in the 1930s, the first modern red velvet cake was served at the Waldorf Astoria in New York City and then later tickled the taste buds of Canadians when after it was served at Eaton’s Department Store in Toronto. 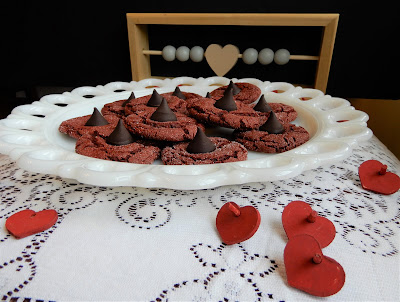 Red Velvet cake as we know it today is probably because of a marketing ploy. A food-dye and extract salesman John A. Adams and his wife, Betty, tasted the red velvet cake at the Waldorf. In 1938, the government passed the Food, Drug, and Cosmetic Act, enforcing regulations on food coloring. Adams decided that red velvet would be his train to success, and as an act of marketing prowess, the couple opted to sell more dyes and extracts. In the 1940s, they released a mahogany cake recipe that used red food coloring. The recipe was printed on cards and sold with vanilla, red dye, and artificial butter flavoring – a popular additive during World War II when butter was rationed.

It also included a recipe for icing, known as boiled-milk frosting, made with milk, flour, butter, and sugar. Red velvet became popular in Texan homes and Midwest state fairs, eventually spreading to the South where it is now a regular at Emancipation Day parties and Juneteenth celebrations – a gathering of red food items that symbolize the blood shed during slavery and the Civil War.

There was a resurgent interest in red velvet when the cake was featured in the 1989 film, Steel Magnolias.

These Red Velvet Cookies aren't just a pretty face: They also taste mighty good. If you try them, let me know what you think!


Red Velvet Drop Cookies
From Sally's Baking Addiction
1 1/2 cups + 1 Tablespoon all-purpose flour
1/4 cup natural unsweetened cocoa powder
1 teaspoon baking soda
1/4 teaspoon salt
1/2 cup unsalted butter, softened to room temperature
3/4 cup light or dark brown sugar
1/4 cup granulated sugar
1 large egg, at room temperature
2 teaspoons pure vanilla extract
1 Tablespoon milk
1/2 teaspoon gel red food coloring (or alternative)*
32–36 Hershey’s Kisses, unwrapped
Coating
1/2 cup granulated sugar
For Cookies:
Whisk the flour, cocoa powder, baking soda, and salt together in a medium bowl. Set aside.
Using a hand mixer or a stand mixer fitted with paddle attachment, beat the butter, brown sugar, and granulated sugar together on medium speed until creamy, about 2 minutes. Add the egg and vanilla extract and mix on high until combined, about 1 minute. Scrape down the sides and bottom of the bowl as needed.
Pour the dry ingredients into the wet ingredients. Add the milk and food coloring, then then mix on low speed until everything is combined. The dough will be sticky. If you want a more vibrant hue, beat in more food coloring a little at a time. Cover and chill the dough in the refrigerator for at least 2 hours (and up to 3 days). If chilling for longer than a few hours, allow dough to sit at room temperature for at least 15 minutes before rolling and baking because the dough will be quite hard.
Preheat oven to 350 degrees. Line large baking sheets with parchment paper. Set aside. Also, make sure there’s room in your freezer because the cookies will need to be placed inside to prevent the chocolates from melting.
Roll & coat: Scoop and roll cookie dough, about 1 Tablespoon of dough each. Roll each ball in the 1/2 cup of sugar and arrange on the baking sheet about 3 inches apart.
Bake for 11-13 minutes or until the edges appear set. Centers will look very soft. Remove cookies from the oven and cool for just 5-10 minutes on the baking sheets.
Set the chocolate: Press a Hershey’s Kiss into the center of each, then using a thin spatula, immediately transfer the cookies to a large plate or a few smaller plates (gently– they’re soft). Place the plate(s) of cookies in the freezer for 10 minutes to quickly set the chocolate kiss in the cookie.
Remove from the freezer and serve.
Cookies stay fresh covered at room temperature for up to 1 week.
Posted by Kim at 8:02 AM