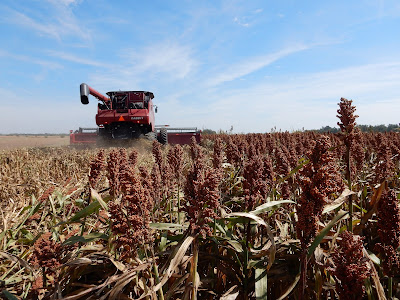 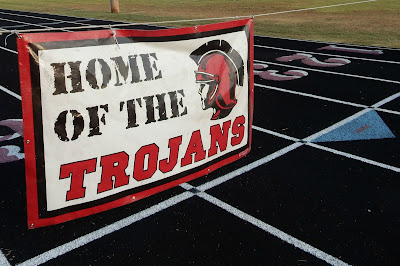 If we're talking high school football, red IS our color. 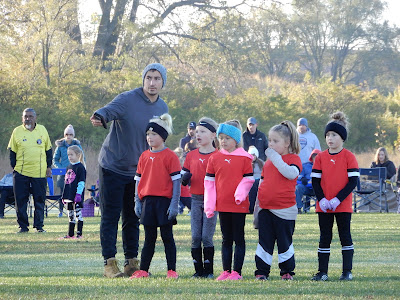 We also cheer for RED when the Fighting Unicorns are playing. 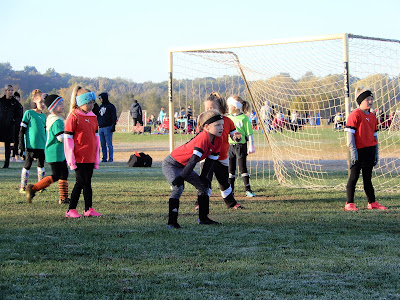 However, in the college football realm, we bleed purple around here. 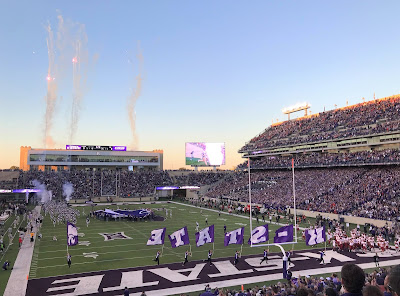 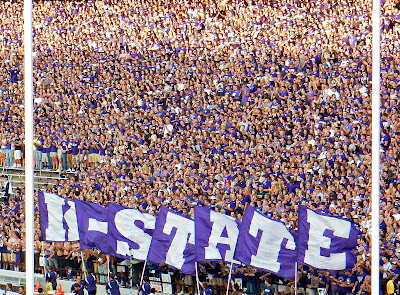 But the "Big Red" I'm talking about this week is our Big Red Case combine cutting our Big Red milo crop. ... OK, it's not such a big crop here on the County Line. 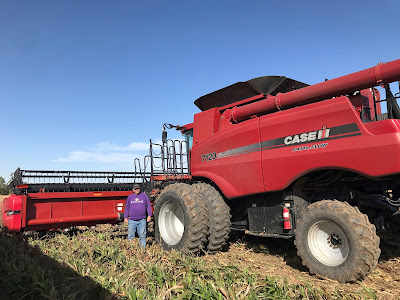 However, Kansas grows more sorghum than any other U.S. state. Our personal milo harvest does not contribute much to the statewide total. We only had 50 acres of milo in 2021, and harvest was done in less than a day. But it's always good to cross another job off the list. And this one was important for a couple of reasons: 1) It's the last of this year's fall harvest; 2) It's our final milo harvest as active farmers.

(We are still planting wheat to be harvested next summer, so don't usher us out the door quite yet). 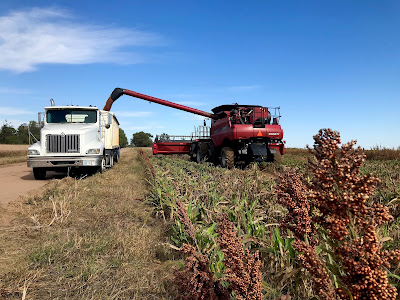 The use of sorghum for human consumption is being developed further in countries where malnutrition and hunger are prevalent. In the fall of 2016, the Kansas State University College of Agriculture Ag Report had an article about sorghum:

In the Mara Region of Tanzania, one of the most starved areas of the world, K-State grain scientist Sajid Alavi is part of a research team working to improve child nutrition and health by providing a sorghum-soybean porridge blend to children younger than 5. ... While the results of the five-month study are yet to be finalized, Alavi said the early indications are that children were more healthy and had average growth rates. 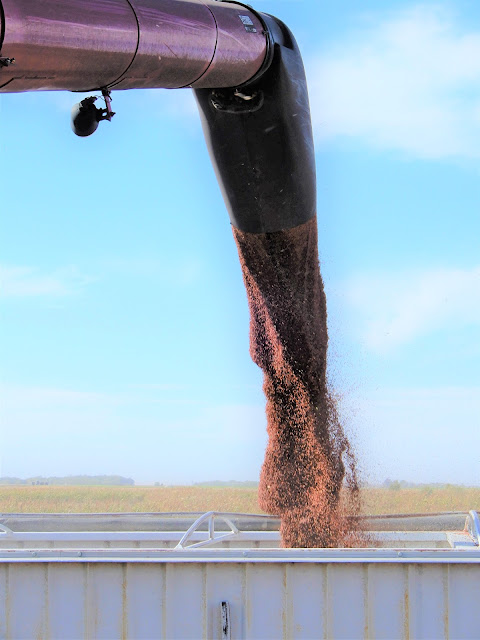 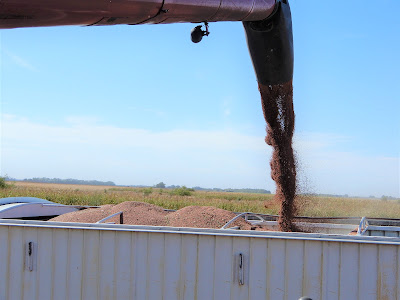 Milo is getting some additional traction in the U.S., too, as consumers seek gluten-free alternatives. 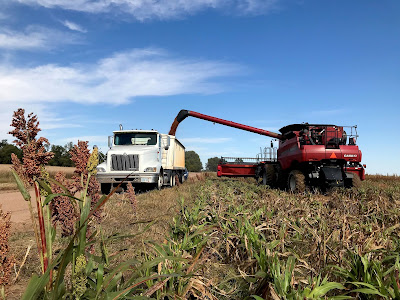 Pheasants are big fans of the grain, too. As we were finishing up the field, we scattered several pheasants. 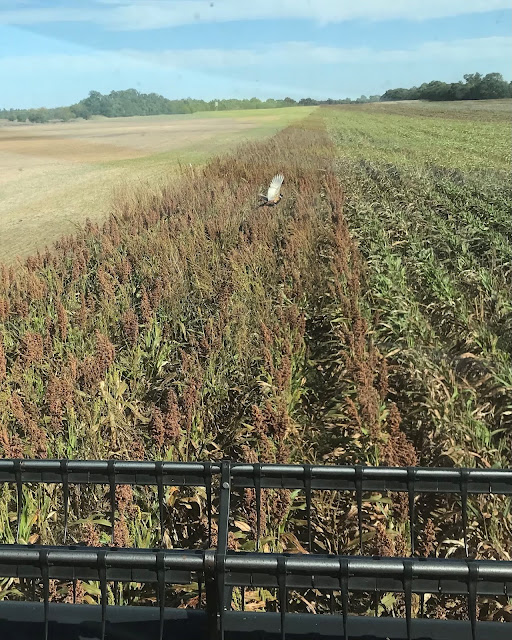 It wasn't so easy to capture the wildlife action through the dirty combine windows. These were the best I got. 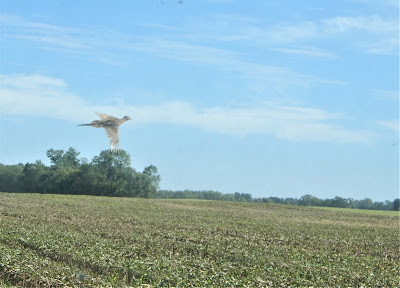 Randy was both the combine driver and the trucker for milo. Our employee just up and quit mid-morning a couple of weeks ago. But that's another story. Randy's lifelong friend, Rex, has been helping us finish wheat planting. So he been driving the disc tractor to get the field ready for Randy to plant after a rain delay last week. (Que the music for "We Get By With a Little Help from Our Friends.") 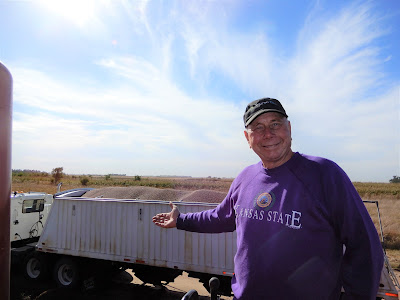 Once Randy had the truck loaded, he tarped it and off he went to Zenith to deliver the final truck load of milo - and fall crops - for the year. 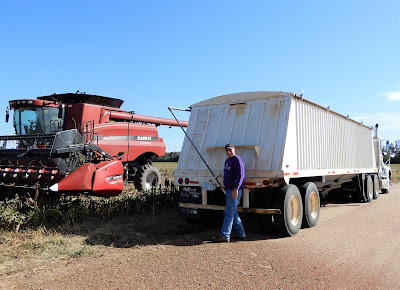 I may have another job to add to my list after his trip to Zenith though. One of the employees there mentioned "Randy's wife's" cookie baking. I think it was a subtle hint.

And we are thankful for all the people who make it possible to do our jobs - from the Kanza Co-op staff to the parts counter guys at Case and John Deere to the friends who fill a tractor seat in a pinch. 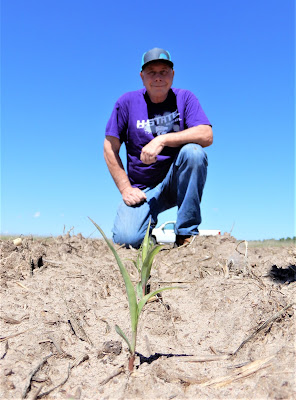 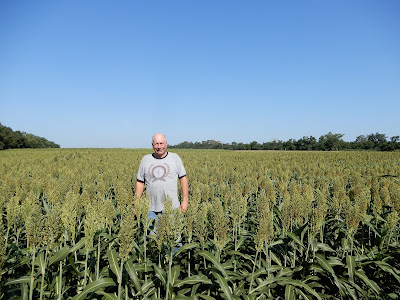 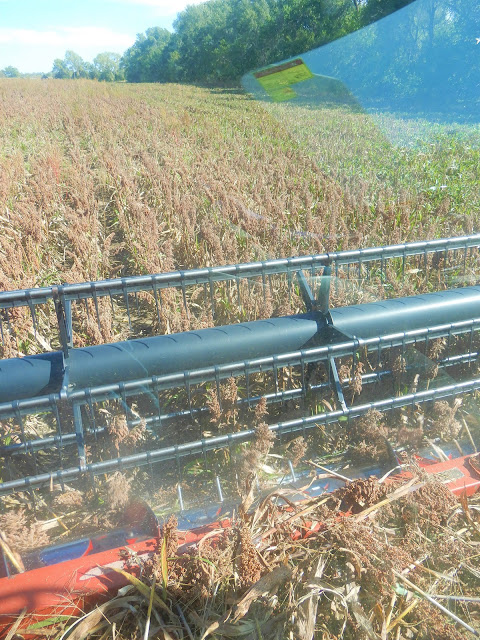 That's a quicker turnaround than the wheat crop, which will take about 9 months from planting to harvest.
Posted by Kim at 8:13 AM