The March Toward Harvest: November Update

The march toward Harvest 2022 continues. As I wrote last month, I have "borrowed" an idea from Stafford County Flour Mill. During the last growing season, the mill posted monthly photos on its Facebook page.

Our summer 2022 harvest will be our final one as active farmers, so I decided to do something similar. Since we began planting wheat on September 21, I chose the 21st of each month as my target date. The photo at the top of the post is November's entry into this online journal of sorts.

Here's how the wheat looked a month earlier on October 21 at the same location.

In October, I also photographed wheat that we'd planted in a field where we'd harvested corn. We had volunteer corn coming up among the wheat. 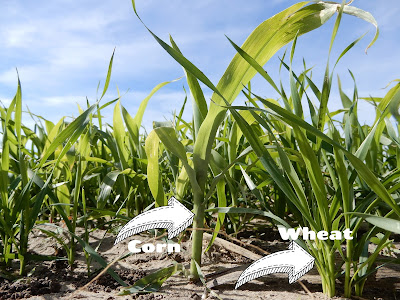 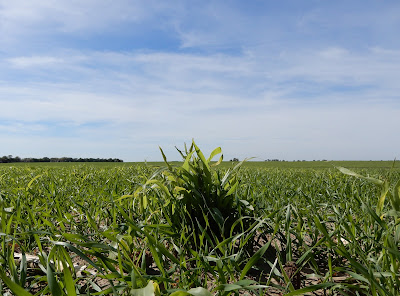 At that time, I said that a hard freeze would "zap" the corn, and it would no longer be viable. But the winter wheat is designed to survive the winter. 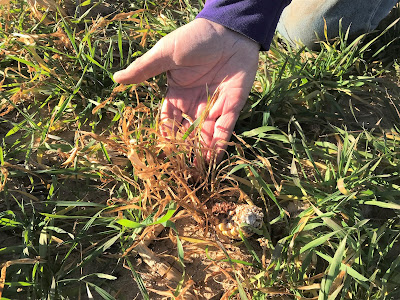 Even though a hard freeze was later in our region than it normally is, it did happen. The still green-colored growth is wheat and the dried up plant matter is the corn. You can also see a portion of a corn cob. 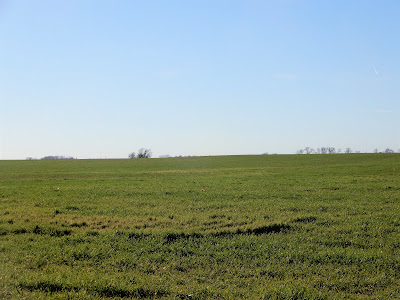 The dying corn gives fields where it's located a yellow tinge. But the wheat will be just fine.

Our planting was delayed by some rain. We didn't finish up planting and replanting until October 23. 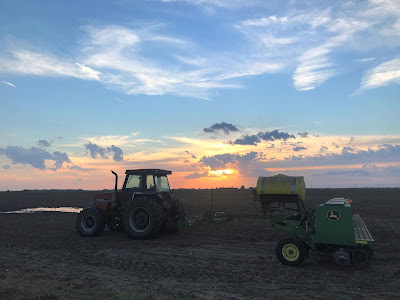 That wheat is a month behind the earliest planted wheat and you can definitely tell the difference. It's not nearly as thick and lush looking. 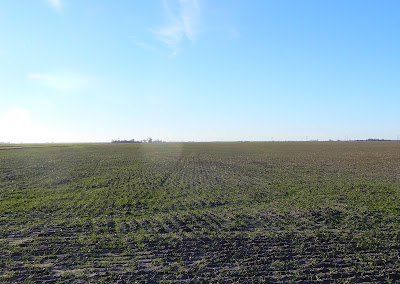 You can see where Randy replanted in this field. He ran the wheat drill a different direction, trying to fill in the stand. 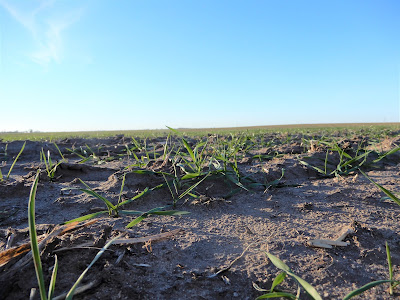 I decided to take a photo at the same location I'd taken the October sunset photo. As you can see, there's still some water in the mudhole. 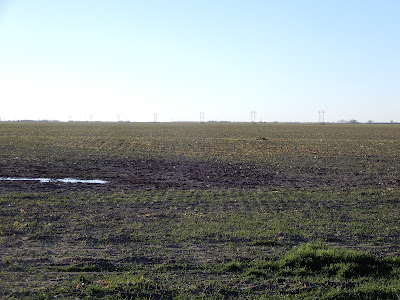 We are not alone in seeing the discrepancies in our wheat stand. We subscribe to "The Wheat Farmer/Row Crop Farmer," a publication that caters to wheat farmers. One of its Kansas columnists said this in the November 2021 issue:

Many farmers delayed planting because it was either too hot or too dry, while others went ahead and dusted in wheat. Then when they did get started, they ran into rain delays. There was a great deal of replanting. I know of several farmers who planted the same fields three times. ... In our case, we have a lot of terrific looking stands but others, while good enough to keep, are just scrappy looking. There could be some weed issues on those fields next spring.
Vance Ehmke, Ehmke Seed, Healy, Kansas
in The Wheat Farmer/Row Crop Farmer

There are good fields, and there are bad fields. ...

And that sums up farming in a nutshell. 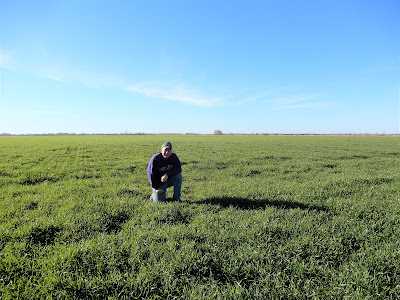