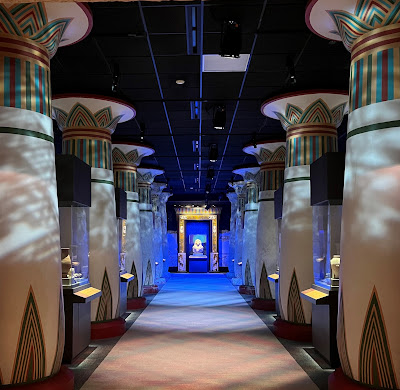 While at the rain forest, we took a side trip to ancient Egypt. Admittedly, both those things happened within the walls of the Museum of Natural Science in Houston. We spent a full day at the museum - one of our extra stops after the K-State bowl win over LSU earlier this month. 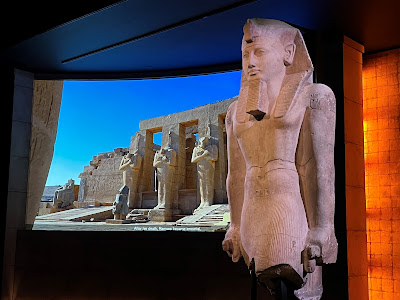 The museum is hosting a traveling exhibit, Ramses the Great and the Gold of the Pharaohs. It added some cost to the general admission ticket, but we decided to fork over the "gold" anyway. When else are we going to "go" to Egypt? 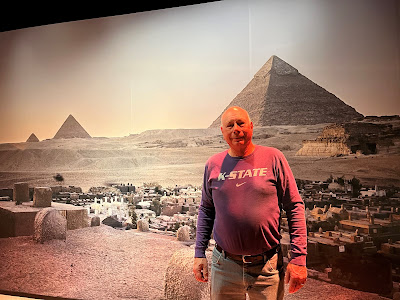 The exhibit transported us back 3,200 years, across the sands of the Sahara Desert. It included 181  artifacts, including Egyptian treasures and one-of-a-kind relics. 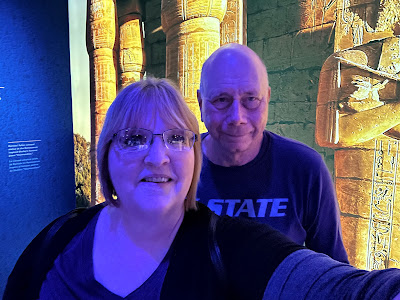 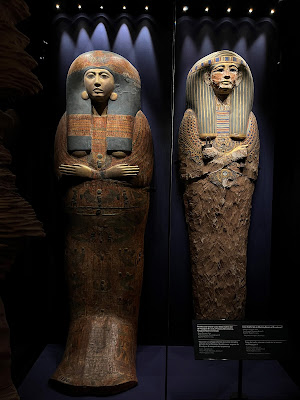 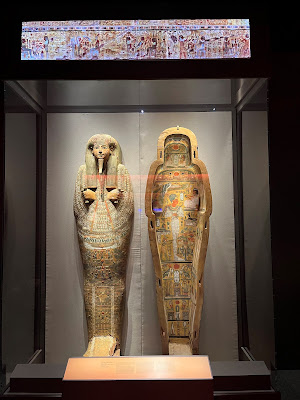 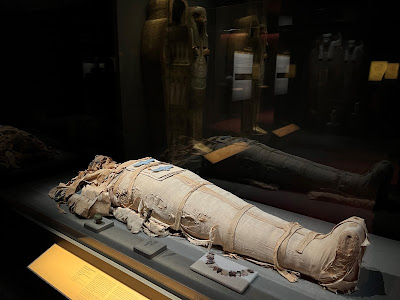 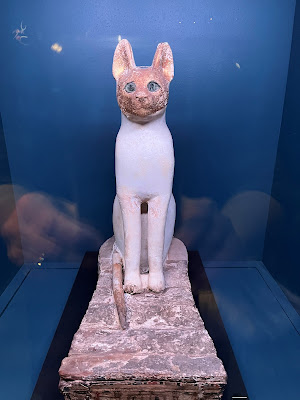 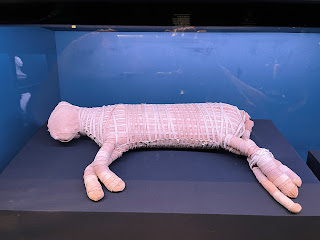 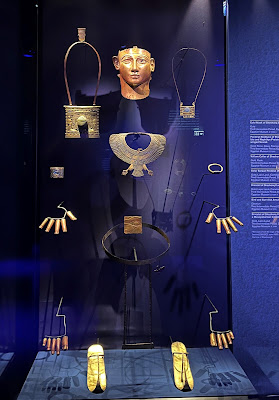 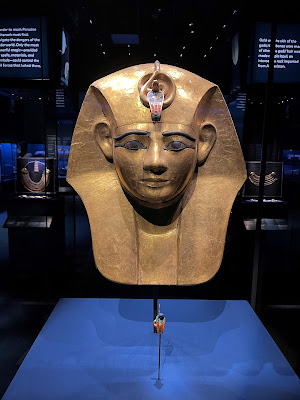 and other treasures of the tombs. 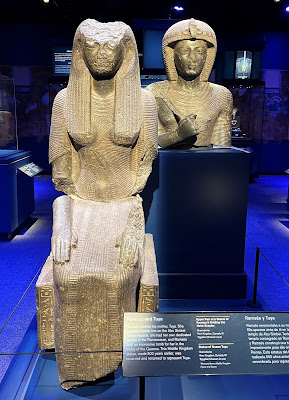 Presented by World Heritage Exhibitions and Cityneon, the world premiere exhibition is in its limited run at the Houston Museum of Natural Science through May 23, before embarking on a multi-country, worldwide tour.

Another favorite exhibit at the museum took us back even further to prehistoric times. 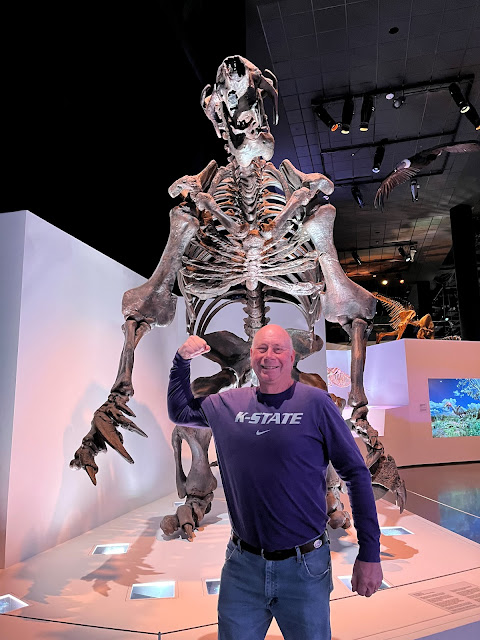 Do you think Randy could put up a fight against this giant ground sloth? 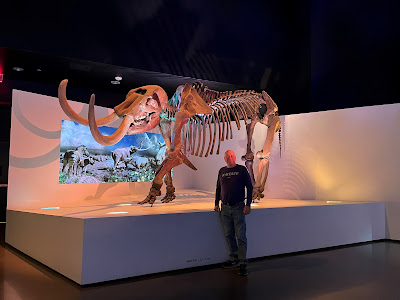 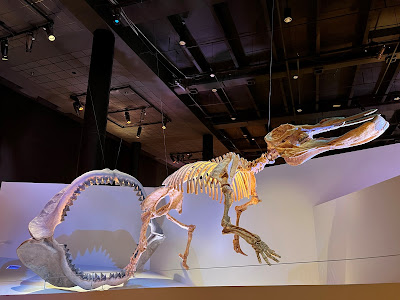 As usual, I took too many photos. What am I really going to do with a bunch of dinosaur photos? 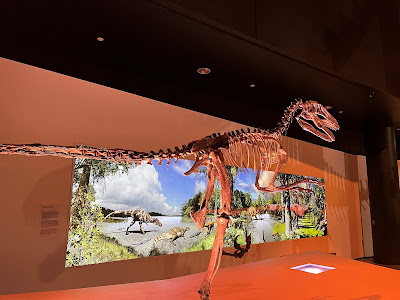 I told Randy it was reminiscent of vacation photos I took on a family trip to California when I was a fifth grader. I had gotten my own camera for Christmas, and I took dozens and dozens of black and white photos of floats at the Tournament of Roses parade. Black and white lost a little in the translation ... but it was cheaper for my parents to develop the film. No digital images, way back when.
The one below was Mammut americanum or Giant Bull. 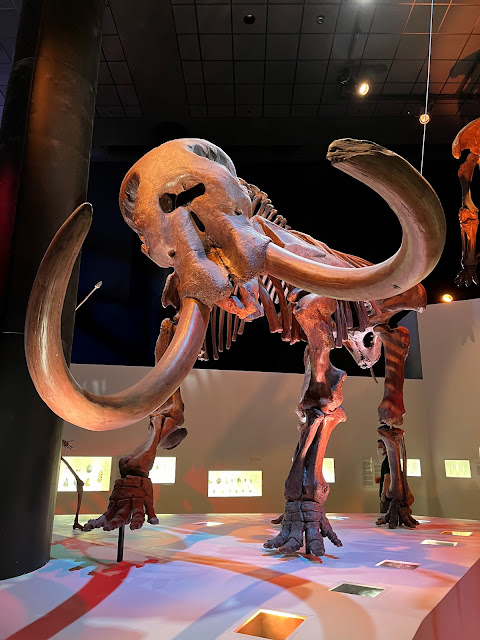 Colonial naturalists were fascinated with Mammut. Thomas Jefferson had Mastodon bones on display in the White House when he was president, along with ground sloth specimens and parts of mammoths. Jefferson was sure that such a creature must have been alive, somewhere in the unknown American west. He instructed explorers Lewis and Clark to find a herd of live mastodons in the Rocky Mountain region. However, the explorers came back empty handed! 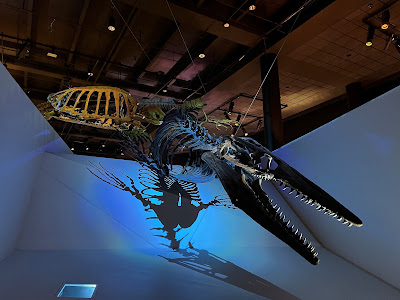 This display was the only one we found that mentioned Kansas. Here's what they had to say:

Kansas today is full of wheat, corn and prairie grass. In the late Cretaceous, warm ocean waters covered the state. Shallow seas spread across immense areas of the other continents as well, generating a new wave of ocean-going reptiles. The newest reptiles were giant sea lizards - the Mosasaurs.

We took the roundabout way home from Houston and did a side excursion to the Magnolia Silos in Waco. 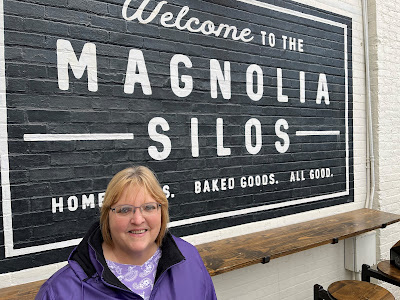 It's the "kingdom" of Fixer Upper stars Chip & Joanna Gaines. 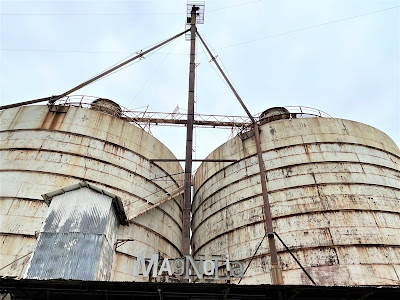 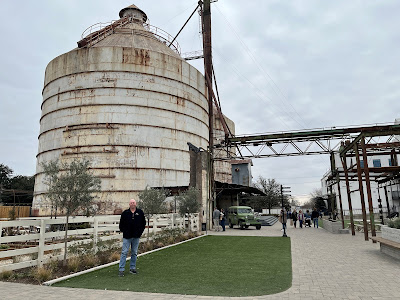 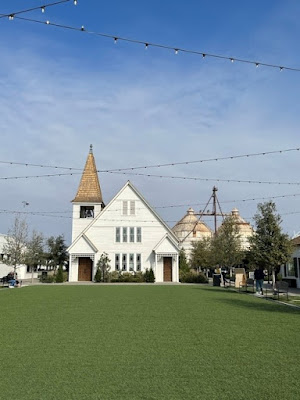 We did not experience a Chip & Joanna  sighting, but we still enjoyed our time there. 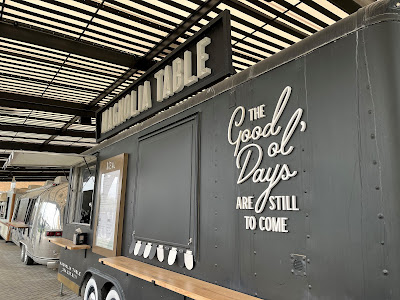 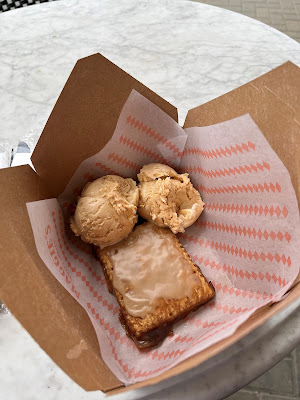 Instead of waiting in line at sit-down options, we ate at the food trucks in the Silos courtyard. I decided to go with the motto, "Eat dessert first" (and only) with this hand pie with caramel ice cream. Yum! Randy had "biscuits" and gravy. In this case, the biscuit was cornbread. It was alleged to be a Chip Gaines favorite.

I couldn't resist a photo of the Brinks truck, making an afternoon pickup. It's mind-boggling to think about how much cash flows through that place! 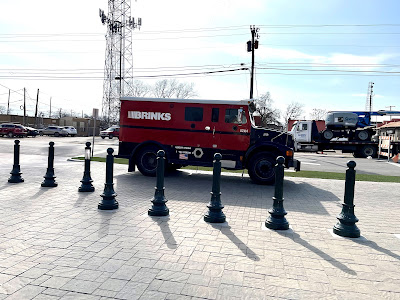 I may have contributed just a bit to the cash pickup ... but not too much. 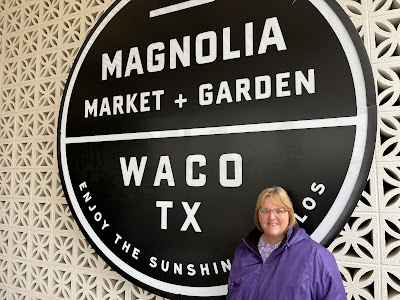