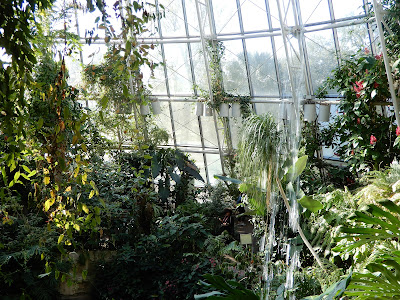 There's a certain satisfaction in realizing that you're in the middle of a tropical rain forest (or - at least the citified version) and missing the polar express temperatures at home. 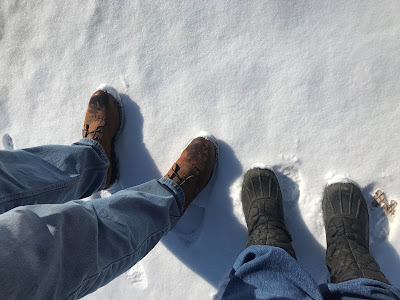 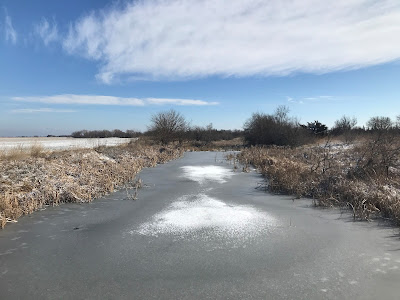 For the past two winters, Randy & I would have been in Kansas, trying to stay warm as we fed and watered cattle. My January photo on the family calendar has a snowy scene of a water delivery last winter. We didn't have hired help the past two years, so we had to stay fairly close to home since cattle seem to want to eat every day. Our cattle herd's Uber Eats was powered by Kim & Randy. 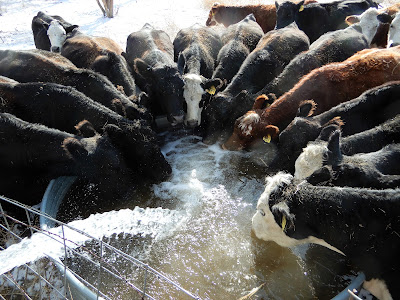 It's probably no surprise to anyone who knows me that the Butterfly House at the Museum of Natural Science in Houston was my favorite exhibit. And that's where we found the "rain forest." 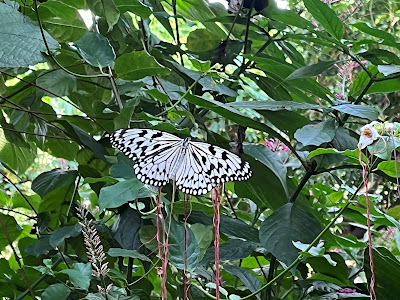 Because we aren't caring for our cattle ourselves this winter, we took advantage of a few extra days away after K-State's game.  One of those days, we visited the museum. 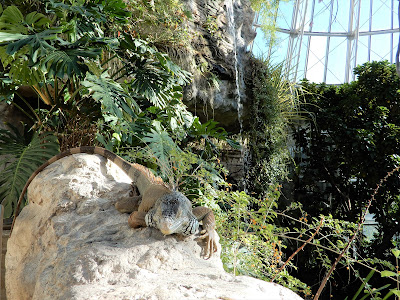 It was a lot easier to take a photo of our "tour guide" than it was the flittering and fluttering guests of honor. He didn't move the whole time we were in the exhibit. But he doesn't have quite the visual appeal as his flighty neighbors. 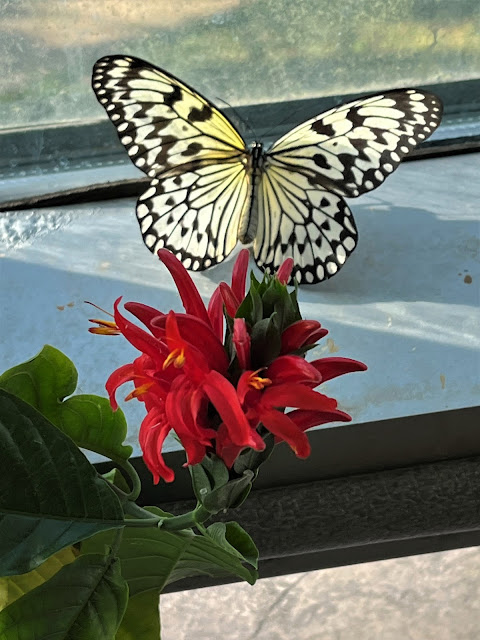 These rice paper butterflies were abundant. With their wafer-paper thin wings, it was easy to see where they get their name. 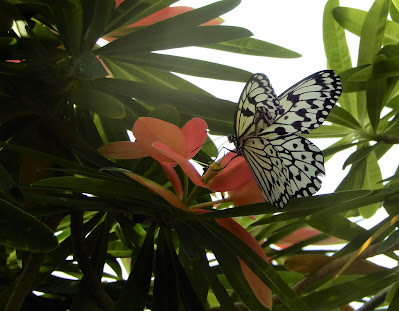 The blue butterflies were much more elusive and much less cooperative. I never saw them away from the windows of the solarium. 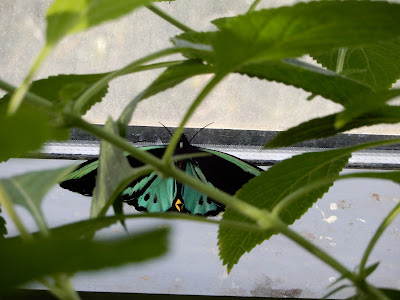 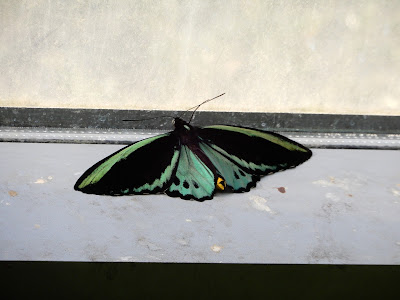 Cornflower blue is probably my favorite color. I would have loved to get a better shot of this blue beauty. 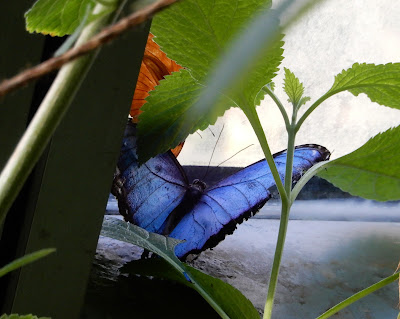 While the colors on the other butterflies were more reminiscent of the Monarch butterflies who travel through our area each fall, there were many more varieties. 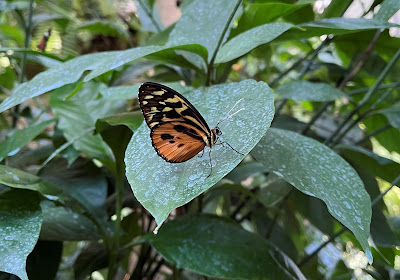 The museum estimates there are 1,500 to 2,000 individual butterflies in the exhibit at any given time. There are 60 or so species of butterflies from tropical regions such as Southeast Asia, Africa, and Central and South America. 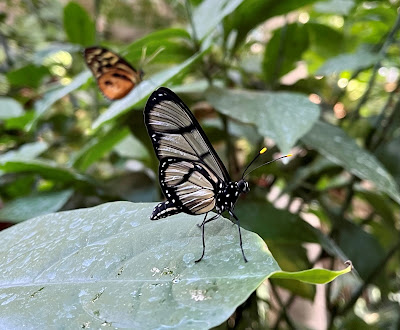 A sign told us to watch for numbered butterflies. A couple of butterflies photobombed the sign as I was taking the photo! 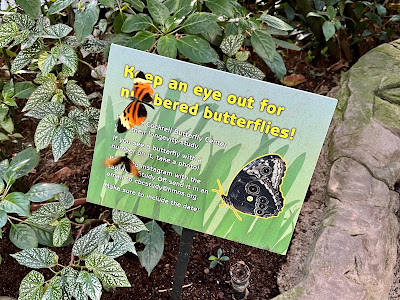 Randy's sharp eyesight spotted one. It wasn't the prettiest photo, but we saw No. 23, nonetheless. 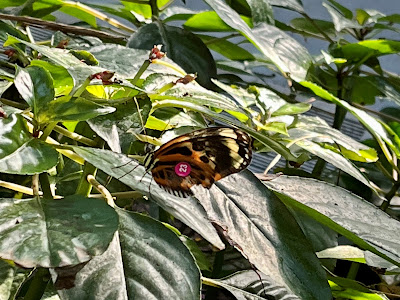 Advice from a Butterfly:

Let go of the past
Trust the future
Embrace change
Come out of the cocoon
Unfurl your wings
Dare to get off the ground
Ride the breezes
Savor the flowers
Put on your brightest colors
Let your beauty show.
-Unknown 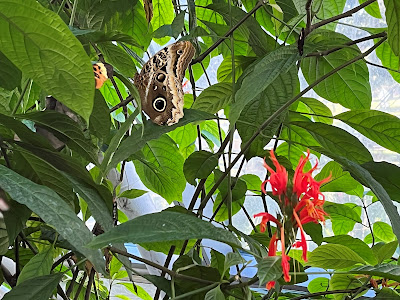 That seems like good advice on this first month of the new year! 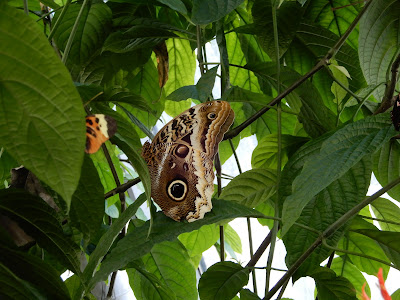 While it wasn't as warm as the rain forest, the moderate Houston temperatures also led to an expedition on the Hermann Park Golf Course. We don't have skyscrapers visible on the Stafford golf course - unless you count our prairie skyscrapers - grain elevators. 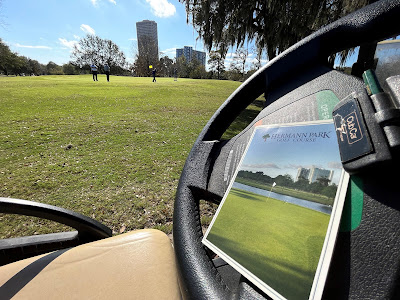 We'd been to another part of Hermann Park for K-State's pep rally before the Texas Bowl. 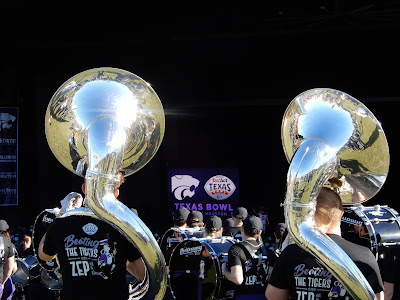 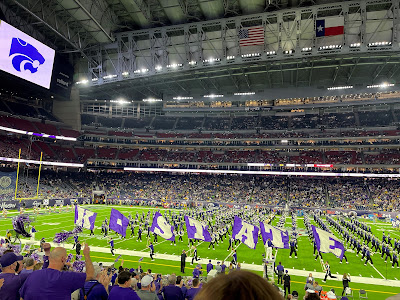 But the next day, we were back in Hermann Park for golf. 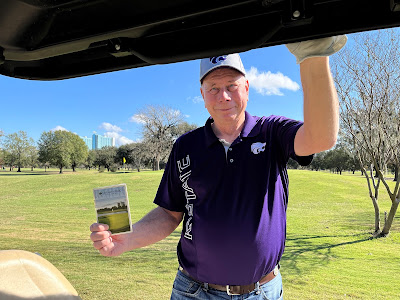 I rode along. Randy's golfing companions were a trio of guys who regularly play the course. They provided lots of free advice. 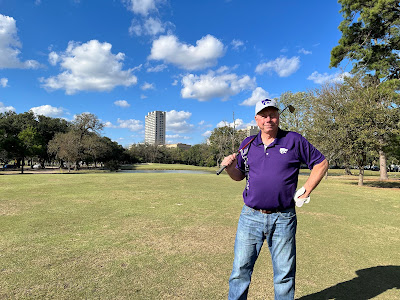 It was still shirt-sleeve weather when we checked out another Houston attraction, the Waterwall, later that day. 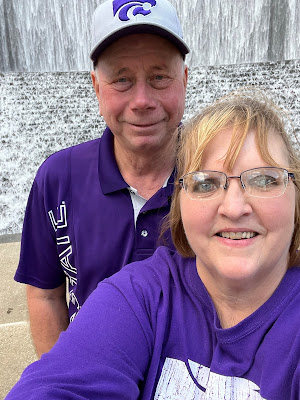 Designed by SWA Group and completed in 1985, the 2.77-acre park in the Uptown District features a 64-foot-high, sculptural fountain popularly known as the Waterwall. 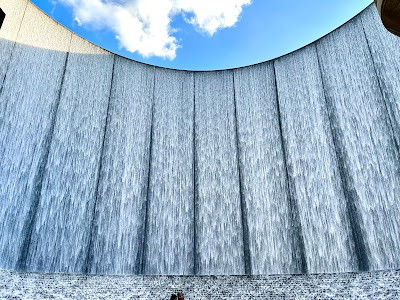 The Water Wall pumps 78,500 gallons of recycled water every 3 hours and 20 minutes. 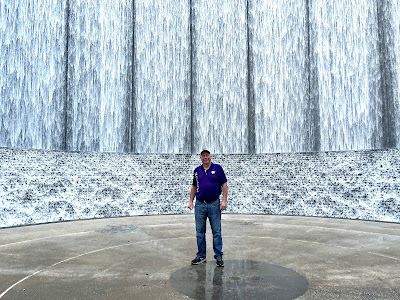 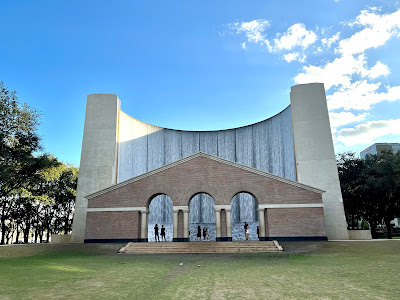 Another stop that warmed our hearts was a visit with Randy's Aunt Lorene, Uncle Gary and cousin Garrick. It had been awhile since we'd seen them. 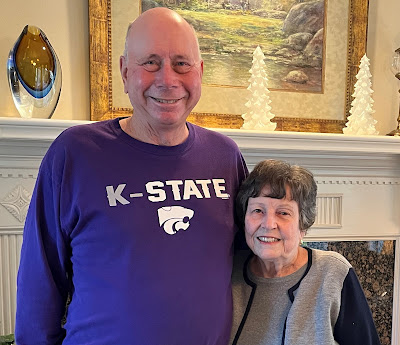 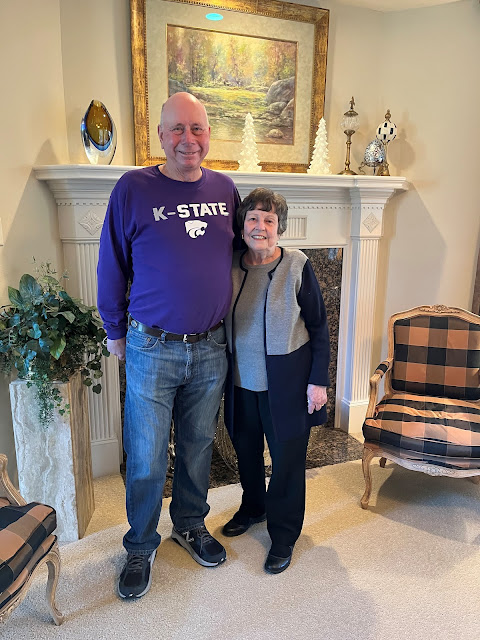 The whole getaway was fun - with the exception of the Houston traffic. Randy only got honked at three times. We'll call that a success!
More from the museum in an upcoming blog!
Posted by Kim at 8:21 AM