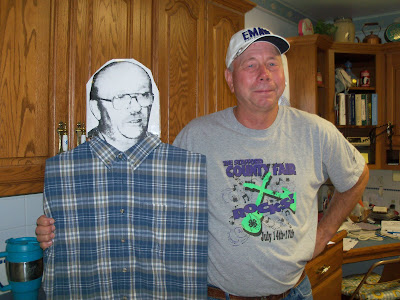 Flat Dennis came to visit during harvest. He looked a lot like the North Dakota custom harvester who sometimes cuts some of our wheat crop.

But this guy didn't have Dennis' distinctive North Dakota accent. And he didn't hold out his hand for the Fritzemeier Farms paycheck before loading up his John Deere combines and driving on to the next stop on his harvest journey. (Maybe it's because his arms were pinned behind his back, I don't know.)

Flat Dennis was the brainchild of David Johnson, a friend of ours who also has benefited from Dennis' harvest skills throughout the years. Because of excess rainfall in North Dakota, Dennis didn't get his spring wheat planted. So he was missing his annual trip to Stafford County, where he joins his son Jason Crockett, a St. John-based custom harvester.

David didn't want Dennis to miss out on all the sites and adventures of the 2011 Kansas wheat harvest. So David and his wife, Jeanie, took Flat Dennis on quite a whirlwind tour of familiar spots.

He went to breakfast with David at Joan's Cafe in Stafford, where he was photographed with the guys. He visited wheat fields. He visited the farms of Dennis' harvest customers. 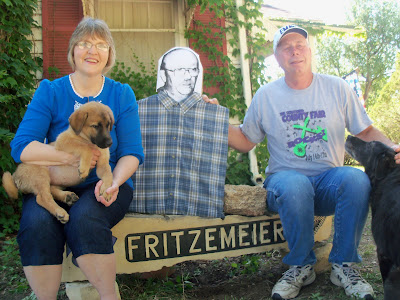 At the end of Flat Dennis' journey, Jeanie put together a tale of his adventures in a Heritage Makers book, a scrapbook that is created online and then made into a hardcover book.

Flat Dennis is based on Flat Stanley, a 1964 children's book written by Jeff Brown and illustrated by Tomi Ungerer. In the book, Stanley is crushed by a falling bulletin board and is completely flattened. But Stanley makes the best of his altered state. One special advantage is that Flat Stanley can now visit his friends by being mailed in an envelope.

In 1995, Canadian school teacher Dale Hubert started the Flat Stanley Project. It was designed to facilitate writing as schoolchildren document Flat Stanley's travels. They read the book, keep a journal for a few days and then send Flat Stanley down the road (or in an envelope, as the case may be). The recipient is asked to treat Flat Stanley as a guest and take him on excursions. They are to write in his journal and then send him back - or on to another friend - after a specified time.

Often Flat Stanley returns with a photo or postcard from his visit. These days, there's even a Flat Stanley "app" for the iPhone. There have been hundreds of thousands of Flat Stanleys who have visited all over the globe. In January, a Flat Stanley visited Debbie Lyons-Blythe, who writes the Life On a Kansas Cattle Ranch blog and ranches with her family in the Flint Hills.

We were glad to see Flat Dennis during harvest. But he's not as good a worker as the real Dennis.
Posted by Kim at 7:00 AM