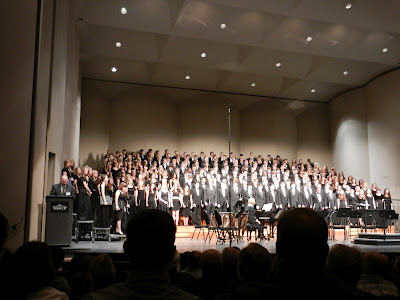 KMEA All-State Choir, 2012
The lyrics to one of the songs said it all:


(This is Listen to a Jubilant Song by Tim Sarsany. It's not the KMEA choir, but a similar honor choir in New England. I guess everyone in the KMEA audience followed the directions and didn't record the concert ... or at least it's not posted to youtube yet!)
The 256 voices in the Kansas Music Educators Association All-State Choir found that "life of music and harmony" during a performance on Saturday.

They came together from all corners of Kansas. Some were from tiny 1A schools. For those students, the 256 people in the choir represented more people than their entire student body (and maybe double or triple!). Others were from 6A schools and may have had 256 students or more in just the junior class.

But regardless of zip code, they came together last Thursday and practiced 15 hours with clinician Kenneth Fulton, a music professor at Louisiana State University, before giving the Saturday afternoon concert.

It was simply amazing - one goosebump experience after another. I was there to watch my niece, Madison, but it would have been amazing even if I hadn't known a single singer. 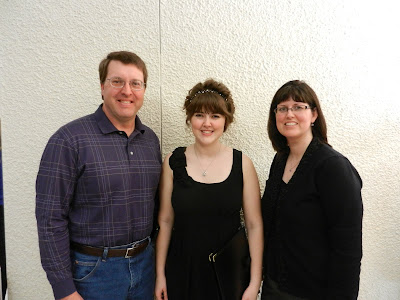 (My brother, Kent, niece Madi and sister-in-law Suzanne after the concert.)
As I sat in the darkened Century II Concert Hall, I scanned the faces of those 256 teenagers on the stage. All eyes were focused on center stage and their director, Dr. Fulton. With his hands, his body and his facial expressions, he brought together all the moving parts into a united whole.

Yesterday morning, I listened to Pastor Amy's first sermon in a Lenten series. She's talking about things to "give up" during Lent. And she doesn't mean chocolate or television. While those things might be tough, the characteristics of human nature that she's addressing are more complex than giving up a Dove bar.

Yesterday's topic was Giving Up Control. That hits a little close to home for a firstborn perfectionist who just might like to be in control. She spoke from Genesis 2, where Adam and Eve disobey God, thinking that they knew better than Him. She also used Scripture from Matthew 4: 1-11. While Jesus is tempted in the wilderness, he denies his own impulses and follows God's will.

As I listened to the sermon, I thought back to the Saturday choir concert. Those 256 singers gave up control to the conductor. These kids are individually talented. They are undoubtedly the best vocalists in their schools. They are probably talented soloists who are also used to performing and excelling individually.

But from Thursday through Saturday, they gave up control to a director. The goal wasn't standing out as a soloist. The goal was to blend together into the best group possible.

They gave up their cell phones. They neglected Facebook and Twitter. Instead, they turned their attention to a single man who taught them concepts they'd never experienced before. And the results were simply amazing.

Maybe it's a stretch to compare a conductor to God. But wouldn't our lives be more jubilant and harmonious if we gave up control to the Master Conductor?

Another of the songs from KMEA on Saturday was The Word Was God by Rosephanye Powell. This particular version was performed by the Florida Music Educators Association honor choir.

***
Today I am linked to Hear It on Sunday, Use It on Monday at Michelle's blog, Graceful: Faith in the Everyday.
Posted by Kim at 8:45 AM

Email ThisBlogThis!Share to TwitterShare to FacebookShare to Pinterest
Labels: devotion, Hear It on Sunday, KMEA, music, music education, Use it on Monday