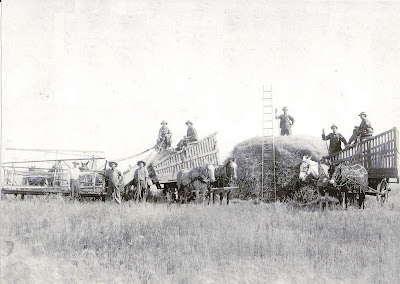 Homer Socolofsky was still teaching Kansas history at K-State when my brother arrived 10 years after me.

To his credit, Kent didn't just recycle my 16-page paper about the history of the Moore family farm. (He probably didn't want to type that much.) He did use some of the information I'd gathered, but he took it a step further. He also explored the history of the Neelly family farm, my mom's farming heritage. (His paper was only eight pages, and he dealt with two families: What can I say? I still need an editor!)

My mom's family has been farming in northern Pratt County since the turn of the century. I'm not into genealogy, though I admire the persistence of people who are. I like the stories. What made that person who they were? What did they love? How did they spend their time? What was important to them? Those glimpses of the people in my past help put together the puzzle of family and heritage.

Here are a few tidbits from Kent's paper:

The earliest record of a Neelly in America is that of John Neelly. He arrived on October 18, 1716, at Philadelphia. The family settled in Botetourt County, Virginia, but later left the area for unknown reasons.

Thomas Neelly Jr. was born in Maury County, Tennessee, and later married Mary "Polly" Moore in 1856. Thomas was a farmer and blacksmith until a stroke left him paralyzed. Charley James Neelly was the fourth child born to Thomas and Polly Neelly. He was born near Hoberg, Mo., but in 1898, he came to Kansas and went to work for a farmer who lived about five miles north of Naron in Pratt County. In 1900, Charley married Ethel Denton. They had 10 children - six boys and four girls. Shelby Merle Neelly (my Mom's Dad/my Grandpa) was their second child. 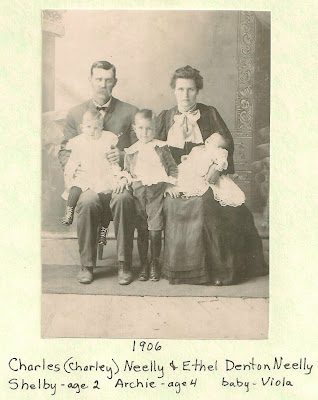 Food for a family of 12 was a major concern. The Neellys had an orchard and a very large garden. It was not uncommon for them to can more than 1,000 quarts of vegetables and fruits. They also butchered their own meat and sold some of it to their neighbors. 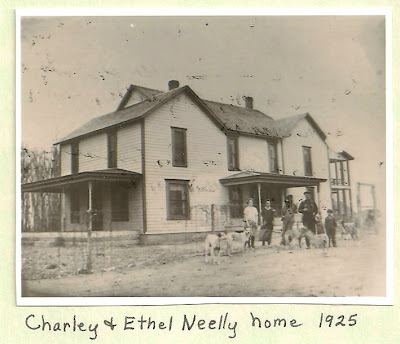 For a behind-the-scenes story about this house, click here.
Charley had a fondness for horses and made money by trading them. He also liked good driving horses and owned 11 race horses during his lifetime. During the 1910s and 1920s, Charley and the children farmed six or seven quarters of cropland. In 1919, they had more than 500 acres of corn. Shelby, his older brother Archie, and two hired hands shucked corn all winter. Corn at that time was worth 25 cents per bushel.

After graduating from high school in 1925, Shelby attended Kansas State College. But in 1928, he had to leave school because of the Depression. He returned home and earned money by shucking corn for 2.5 cents per bushel. In 1929, he went back to K-State and earned his bachelor's degrees in physical education and biology in 1933.

He coached and taught school, farming on the side. In 1945, he began farming full-time. In 1987, he sold his machinery and transferred operation of his ground to his grandson, Kent, who still farms that ground today.

The farming roots run deep, not only on my mom's paternal side. Her mother's family farmed northeast of Trousdale. I love this photo taken in 1907. My grandma, Lela Johnson Neelly, is the baby being held in her mother's arms on the porch of the farm house. Doesn't it look like Americana personified? 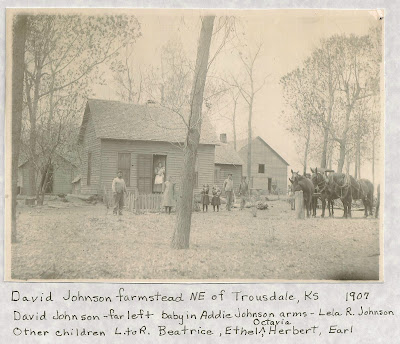 Randy's family also has ties to agriculture for more than 100 years. A few years ago, our pasture was recognized as a Farm Bureau Century Farm. Initially, Randy's Great Great Great Uncle owned the ground. It was inherited by his great grandmother. Then his Grandpa Fritzemeier and two of his brothers owned the pasture together. Now Randy and his cousin are the owners. 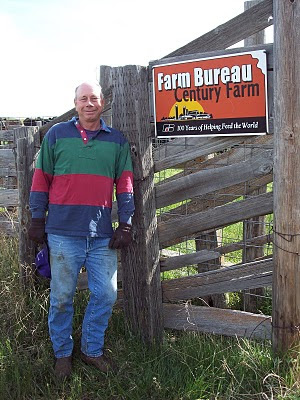 Our roots run deep in Kansas. And I wouldn't change a thing.
Posted by Kim at 6:30 AM