Fall Homecoming: A Parade of Sorts

A few weeks ago, we were at K-State's fall homecoming parade. We've had "homecoming" of a different sort during the past couple of weeks on the County Line. 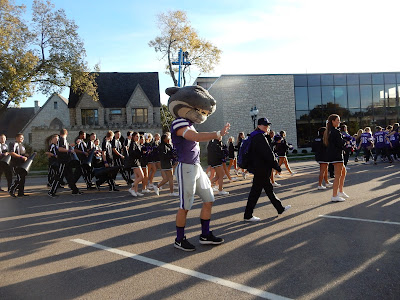 In Manhattan, there's a parade staging area at the mall. The organizer gets all the floats and vehicles lined up for a steady line of traffic down Poyntz Avenue. We could have used a parade marshal to organize our annual round up of cattle off the summer pasture at the Ninnescah River. 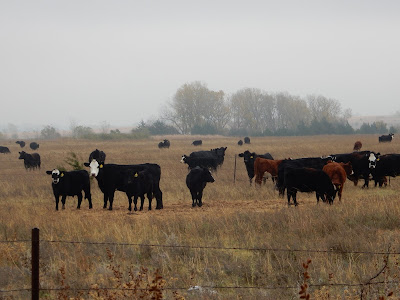 Instead of tunes to a marching band ... 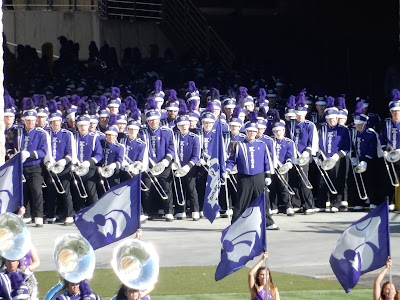 ... our cattle danced to the "music" of a honking pickup horn. But they definitely weren't interested in marching to a 4/4 tempo. They marched to the beat of their own drummer. 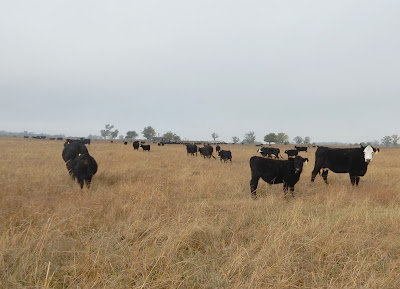 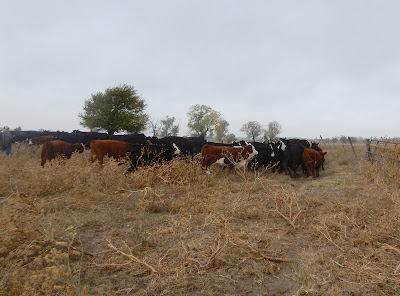 Instead of tissue paper-packed floats to provide decor ... 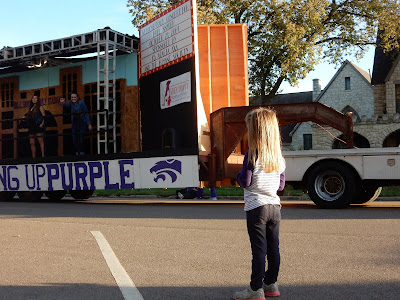 the falls colors of the prairie gave the ambiance. But early in the day, the colors were faded under an overcast sky. 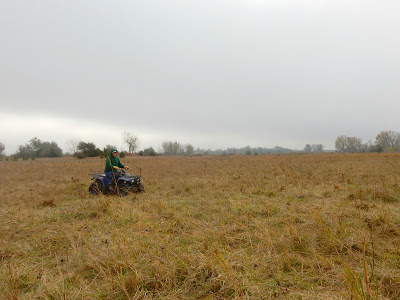 We do the round up in two phases:  First, we gather all the cows, bulls and calves together into a lot. 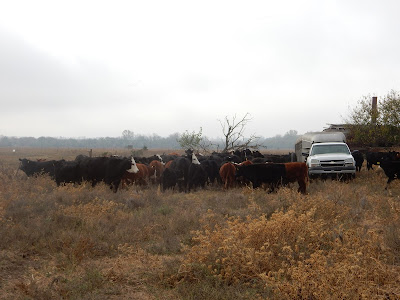 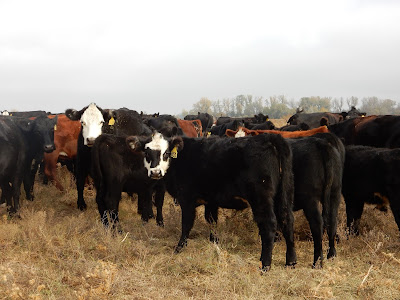 The bull and one of the cows were glad to clean up the hay leftovers from the back of the pickup before they were herded into a smaller pen for sorting. 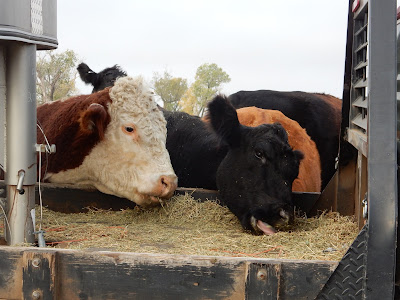 During our first trip to the pasture, we separate off the calves and bring them back home via farm trailers to the farmstead for weaning. 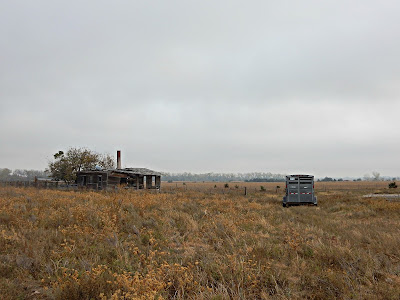 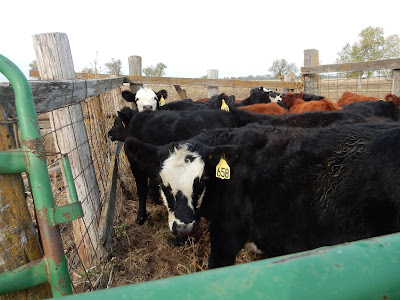 After we have the calves sorted off, we turn the mama cows and the bulls back into the pasture for an extended "vacation." 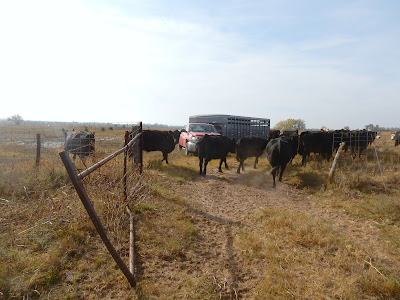 We don't have enough pens at the farmstead to keep everything separate while we wait for the veterinarian's visit to work the calves which were born in February and March of this year. 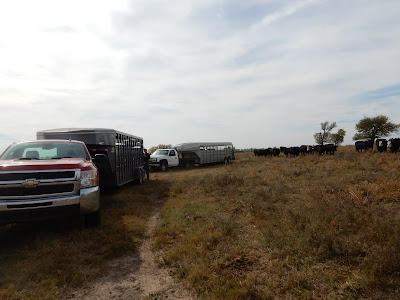 You'd think that the mothers would relish a little uninterrupted grazing after they've been serving as personal milk machines during the past six-plus months. 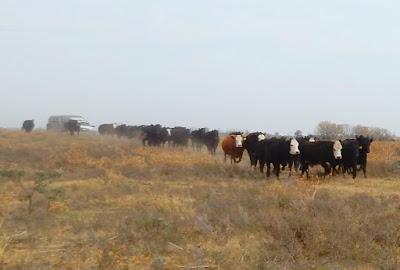 But when they realize their babies are leaving without them, there's a parade toward the trailers. 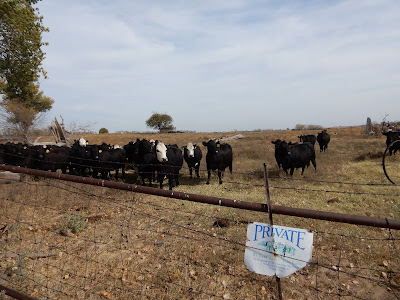 Every return trip, I stood at the gate while the trailers came through so the mamas didn't follow the trailers out of the pasture gate. 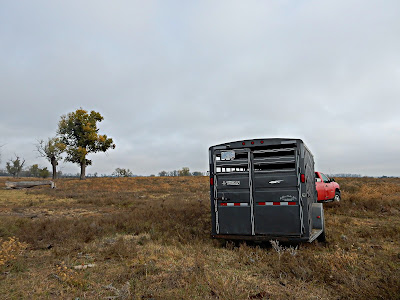 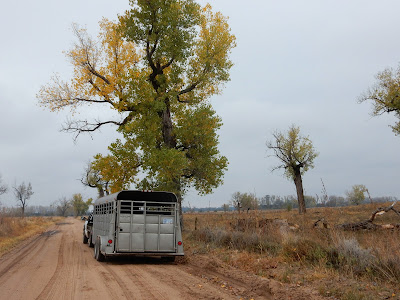 Before going back to the farmstead, we stopped at the co-op elevator scales to get both an empty weight and a loaded weight. After doing a little math, Randy figured that the calves averaged 565 pounds per head. He was pleased with the rate of gain. 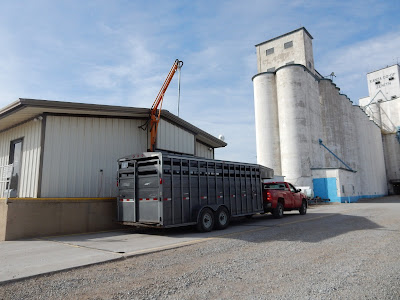 Once at the farmstead, we counted calves as they came off the trailer, then they could enjoy a plentiful silage buffet in the corrals. 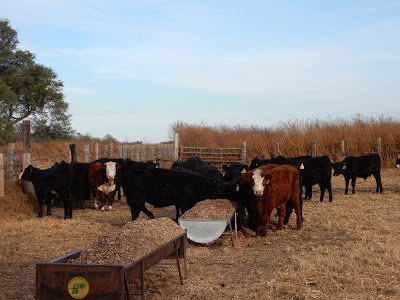 Our counting revealed a problem, however. We were several several cows and calves short. So Randy and I went back to the pasture to look for them. 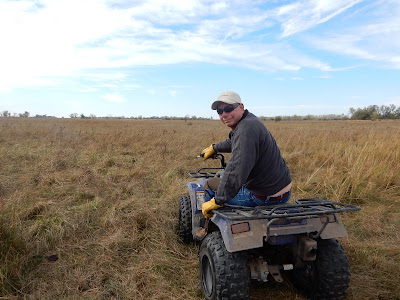 By that time, the sun was shining and it was a beautiful fall day. 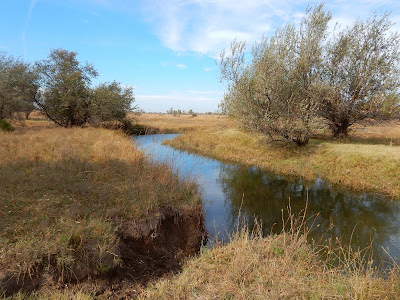 Don't tell the boss, but it didn't seem like work to ride a 4-wheeler in a pretty setting. 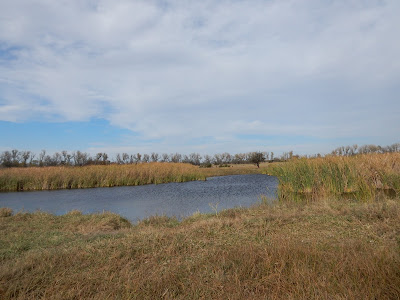 While we could use some rain now, summer rains have kept the Ninnescah River flowing this fall. 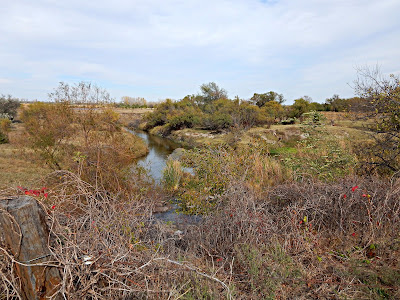 However, after we had been searching for awhile, I must admit I was getting a little nervous about finding them. We hoped they hadn't escaped to a neighboring pasture. 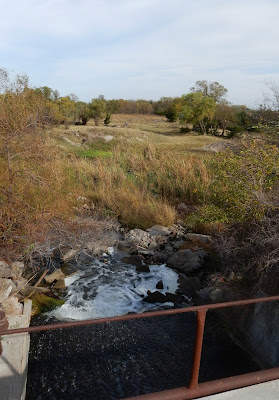 But the stragglers were eventually found. Randy opted to leave them there, knowing we'd be back the next week to pick up the rest of the mama cows. 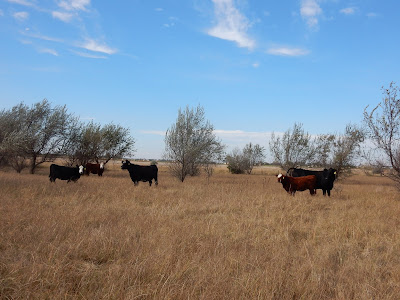 Coming up on the County Line:  A visit from the vet and the 2016 finale to the summer pasture season.
Posted by Kim at 6:49 AM