The Land of the Free, Home of the Brave 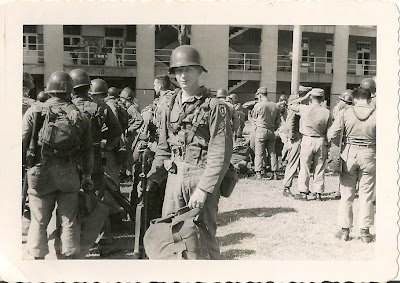 My late father-in-law, C. Melvin Fritzemeier, served in the U.S. Army following the Korean War. He didn't talk about his service with me. But on this Veteran's Day, I wanted to pay tribute to him and others who have faithfully served our country during wartime and times of peace.

Maybe I just needed to take him on a road trip by Fort Riley. As a kid, Randy remembers hearing "war stories" in the back seat as his Dad drove by the fort, where he had trained before being shipped out to Korea.

Not long ago, I was digging for photos and came across several from Melvin's military service. After Randy's folks died, we cleaned out their farmhouse. By the end, we were all tired of sorting, so we ended up putting family photos in plastic tubs. We got elected to be the repository for all the tubs. 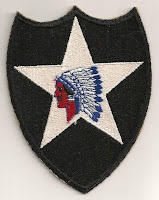 Also in the box was this Indianhead insignia, the symbol for the Army's Second Division since October 1917 at Bourmont, Haute-Marne, France, from troops in World War II. The color markings (red, white, and blue) used to identify the division and their equipment in France were chosen  by the commander of the division as the colors for this insignia.  The star and Indian head signify the American origin of the division.

Melvin was drafted three months after the Korean War officially ended. He served as a truck driver. Randy says he talked about sleeping outside in tents.

Melvin often told a story about Army food. He would never eat dried beef gravy after serving in the Army. He also never touched fruit cocktail. Randy says that he and a buddy each ate a gallon of fruit cocktail that they'd cooled in a nearby stream. He ate so much of it that he never wanted it again.

As is the case today, servicemen and women leave behind their families as they go to serve their country. I found several little yellow books of photos, which Marie must have sent to Melvin overseas. Marie stayed with her mother in Stafford while Melvin served, and she worked at the Farmers National Bank until he returned and they moved to the farm. 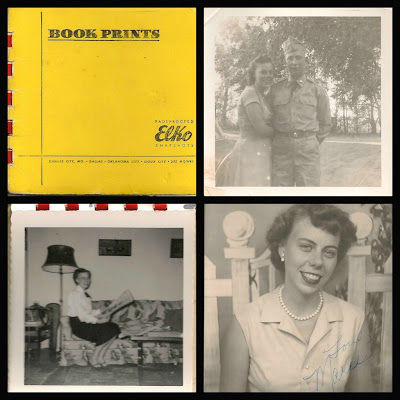 Melvin served two years. By the time he returned to Stafford, he had traded his Private 2nd Class stripes for a Corporal designation.

On this Veterans' Day, I'd like to thank all the veterans for their service. Our little community of Stafford has a number of young men and women who have served in the Armed Forces. I thank them for keeping America strong, and I thank their families for the sacrifice of being apart from their loved ones, often in dangerous places. 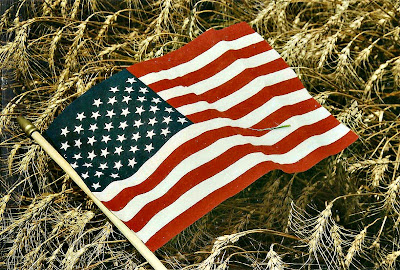 This nation will remain the land of the free
only so long as it is the home of the brave.
~Elmer Davis
Happy Veterans' Day!
***
Note: This is a reprint from my archives.
Posted by Kim at 6:55 AM