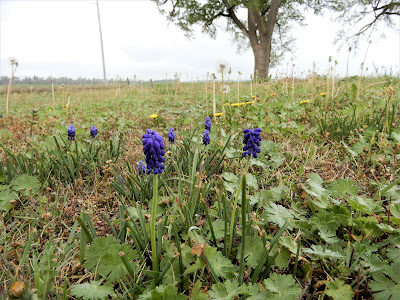 You could look at an overgrown lawn and think about another task that needs doing.

Or you could find a memory nestled among the dandelions and such. So it was last week.

Randy called me and told me about little purple flowers he saw at his old childhood home. It's where we have our shop and the bulk of our farm tools and equipment.

It had been years since he'd noticed them. We're not sure whether that's because we don't usually let the lawn get that tall or whether weather conditions were just right for its growth. (I use the term "lawn" loosely in this instance.)

"They're where the wash house used to be," he told me.

"It's where the clothesline and sand pile were," he further explained. (Same answer from the wife.) 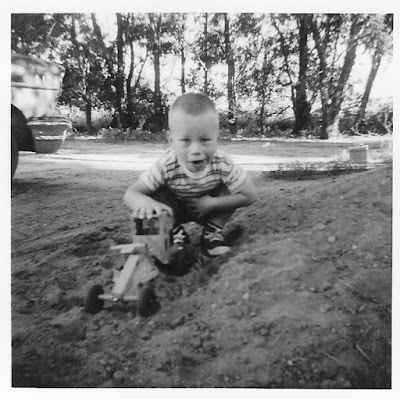 Last fall, when Randy's brother Lyle died, I found this photo of Randy as I was looking at an old scrapbook. I thought of that photo as Randy was describing his memory of childhood. 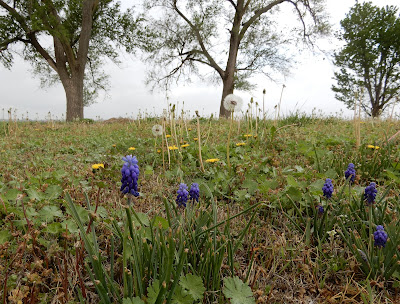 "Would you please take a picture?" Randy asked. (People are always remarking about how cooperative Randy is with my blogging and the constant photography. He is. But he also prompts a fair number of the photos himself.) 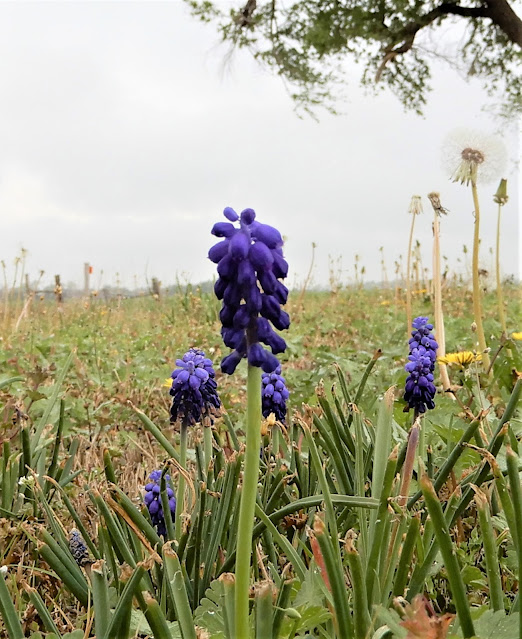 I snapped a few photos of the purple flowers before taking off to Hutchinson for planter parts.

Later, I asked my friend, Diana, who's a Master Gardener, if my identification of the plant as a grape hyacinth was accurate. It was.

But for Randy, who spent a lot of hours in the tractor cab last week planting corn, I figure that glimpse of pretty purple flowers in an overgrown lawn was about a lot more than that. 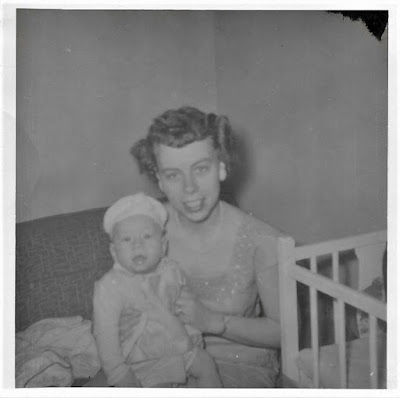 It was a portal to remembering his mom hanging clothes on the line while he played nearby. 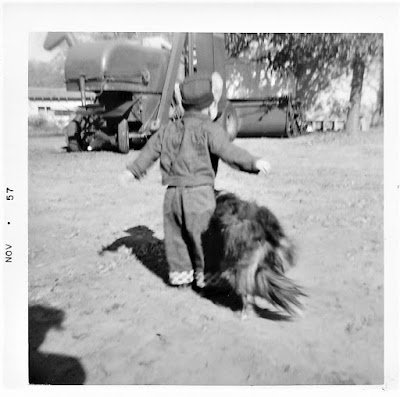 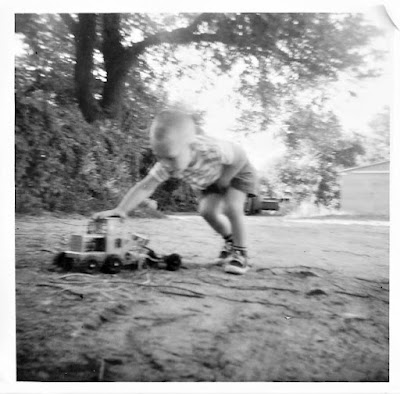 It was about playtime in the backyard with his brother. 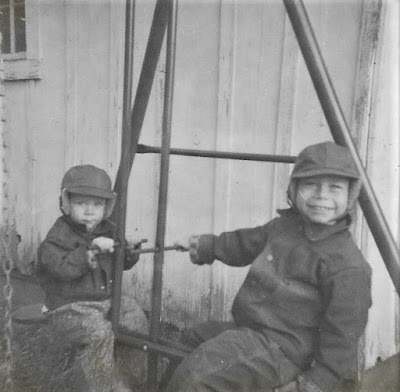 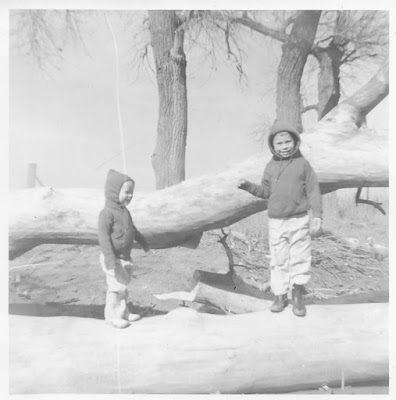 Maybe those memories were further prompted by the recent placement of Lyle's stone at the Stafford Cemetery. 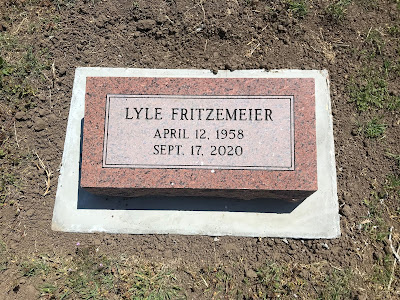 Our friend and funeral director, Jay, told us it was in place, so we drove out to the cemetery after church. (He also told us Fritzemeier was spelled correctly, so we wouldn't need our WhiteOut. What a relief!) 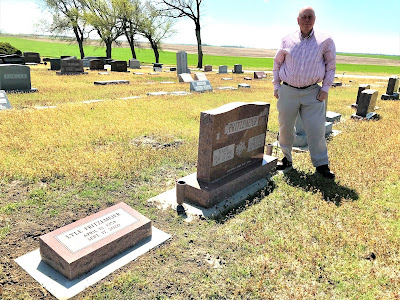 The miracle of gratitude is that it shifts your perception to such an extent that it changes the world you see.

A Time to Act

A Time to Pray

Dear Lord, when I am focused on my problems, and most likely making mountains out of molehills, guide me to go outside, look upwards and have faith in Your omnipotence.

I got another reminder as I glanced out our window at sundown. Yes, there were those infernal dandelions in an overgrown lawn - at our house, too. But the light was causing them to glow as if they had halos. I was drawn outside for a closer look and heard the birds serenading me as the sun went down. 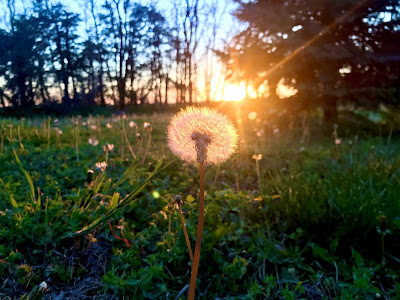 The complexity and delicacy of a dandelion is amazing - even if it is a weed. 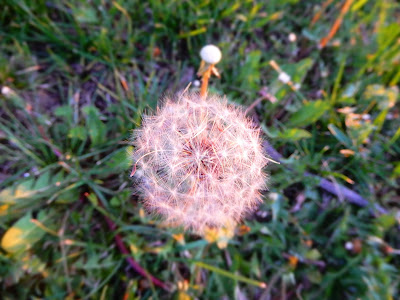 There's always something to be thankful for and something at which to marvel. 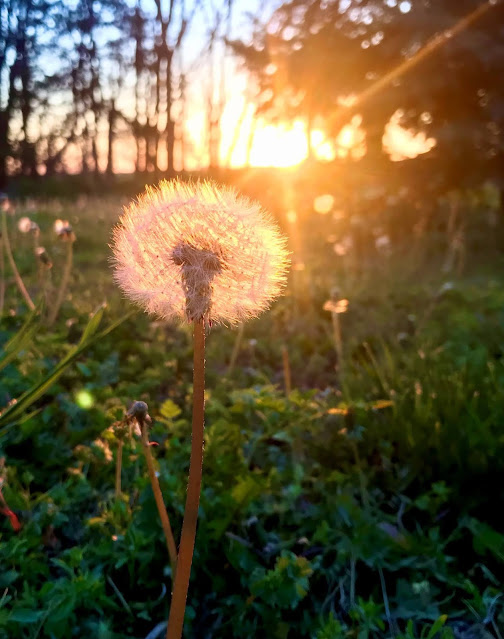 It may be as close as just outside our door if only we look at things in a different way. 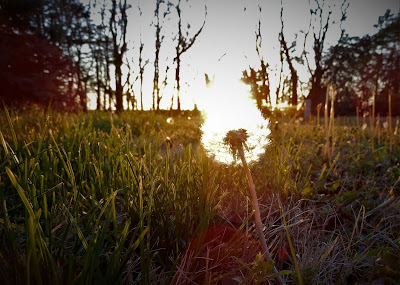 Maybe it's worth making a wish that we have eyes to see. 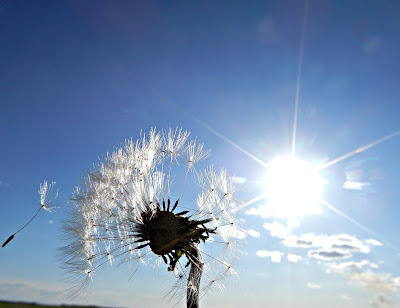 ***
As we approach Mother's Day this weekend, I figured this was a fitting tribute to Marie, Randy's mom. I didn't appreciate her nearly enough when she was still here.
And an early "Happy Mother's Day" to my mom!
Randy and I were both blessed with wonderful moms! I'm fortunate enough to still be able to celebrate with my mom. And after a year of pandemic, it was good to get together for an early celebration yesterday. 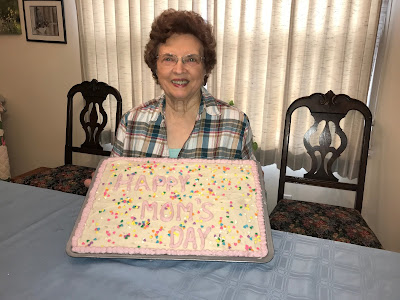 It's definitely not a professional decorating job, but it tasted good. If you have ripe bananas on your counter, this Banana Sheet Cake recipe from the County Line could be a contender! 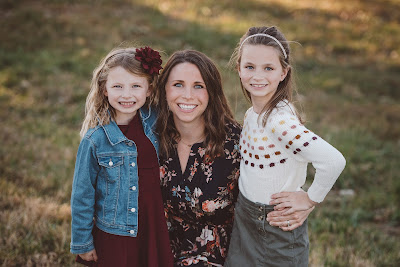 Wishing our daughter a wonderful Mother's Day, too! We're so proud of all the hats she wears - including amazing mommy!
Posted by Kim at 7:50 AM