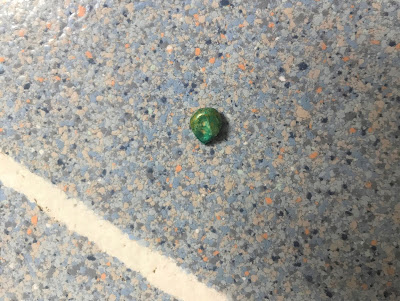 I've found a few of these hitchhikers lurking on the floor of our farm house lately. 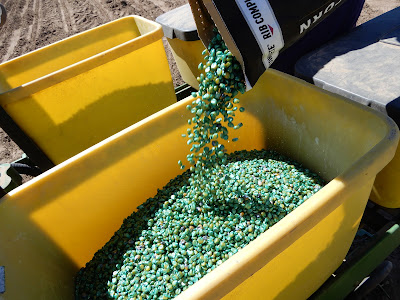 Thankfully, most of its buddies ended up in the ground.

It's corn planting time in Kansas. In the scheme of things, our farm is kind of like that single grain on the kitchen floor. The 294 acres we planted this spring on our dryland farm don't amount to much in the overall statistics of production for Kansas.

However, only five states produced more corn than Kansas in 2020. USDA estimated the 2020 Kansas Corn Crop at 766 million bushels, with a yield of 134 bushels per acre and 5.72 million acres harvested. Last year's crop was the second largest in Kansas history, falling only to the record 2019 crop of 801 million bushels.

According to the Kansas Corn Commission, a third of our corn stays in Kansas to feed livestock; a third is made into ethanol and dried distillers grain at Kansas ethanol plants; and a third of our corn leaves Kansas to be used in other states or exported overseas, along with corn products.

Since our primary crop is wheat, we don't contribute much to that total. For us, corn is one of the crops used in our rotational program to keep soil quality good and weeds down. For my brother and parents in a neighboring county, corn is a primary crop. 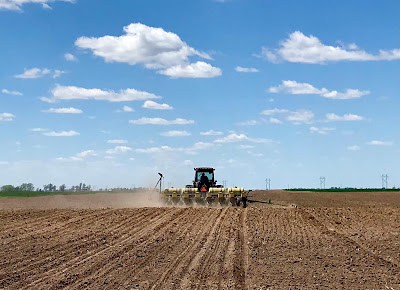 We began planting corn on April 26, a little later than our normal plant date. However, in mid-April, we had fairly chilly weather, so the soil temperature wasn't conducive for growing anyway. Plus, we had some cattle-moving tasks to complete first. (And, it allowed a visit with the granddaughters before we began the new task - bonus!)

Today, many farmers plant RIB corn (refuge in a bag) - whether it's irrigated or dryland. 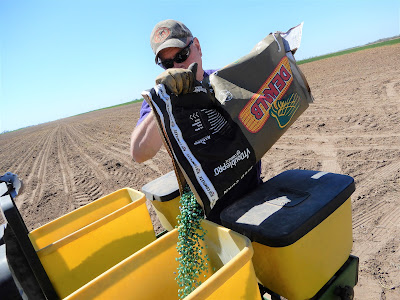 The green-colored seeds have a different genetic make-up and are treated with a different insecticide than the purple-colored seeds. The purple seeds are a refuge for several different insects in a field, giving them a habitat to satisfy EPA rules. Before RIB technology was available, farmers had to plant so many acres in a field to a corn that wasn't resistant to the bugs and the rest of the field could be resistant. With RIB technology, farmers can plant it all at the same time, without changing seed and figuring acreage requirements. 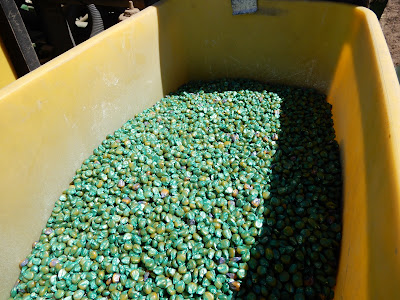 Randy adds a seed talc - or lubricant - to the planter boxes to facilitate the seed's journey from planter to soil. 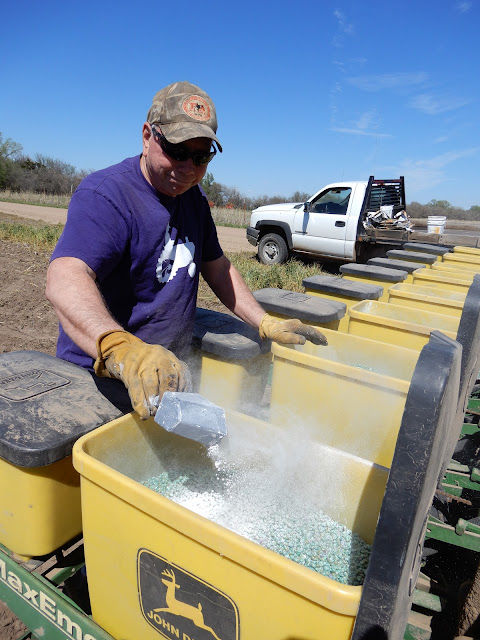 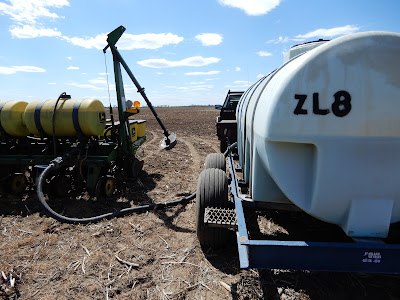 It included nitrogen, phosphate, sulfur and zinc. After planting, the co-op is applying more nitrogen, along with herbicide 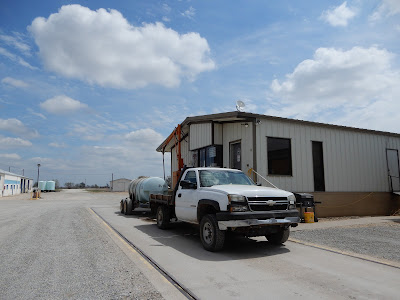 The fertilizer is in the tank pulled by the pickup. First stop is pulling up to the scales at the elevator to weigh the empty pickup and fertilizer trailer and tell the scale operator what kind of fertilizer we want. (There's another stop after the tank is filled for a final weight.) I also let them know how to bill the previous load of fertilizer.

Then, it's off to the fertilizer shed, where an employee fills the tank with the "recipe" Randy has ordered. 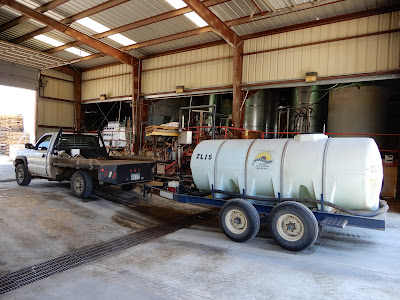 I stand around and take photos of our prairie skyscrapers and the clouds. (What else is new?) 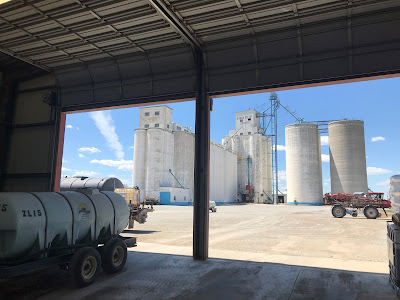 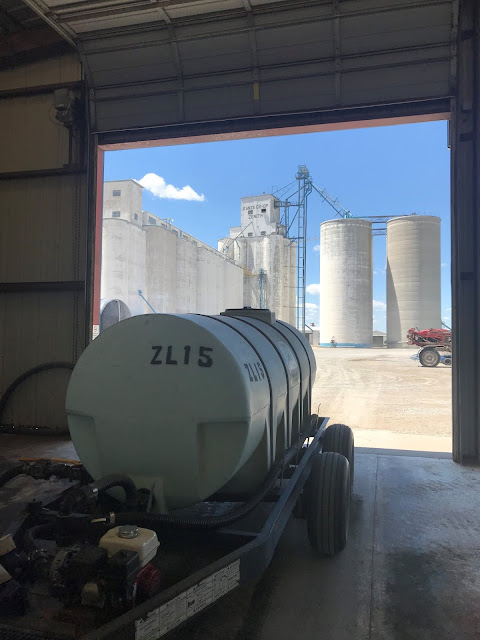 This year, we again picked up the seed as we need it at Zenith, so on some trips, we also get the bagged seed from another building. 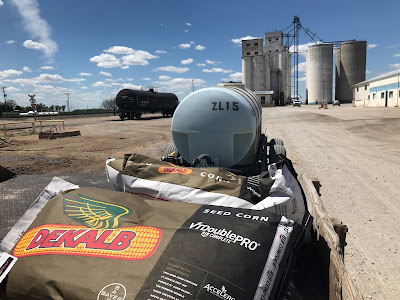 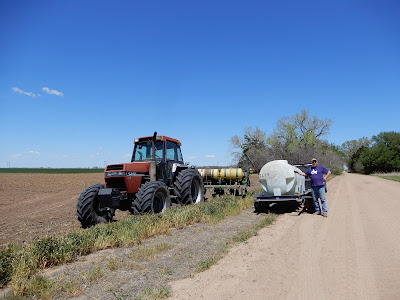 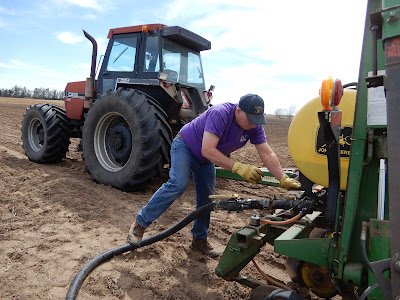 He starts a motor to pump the fertilizer to the planter. 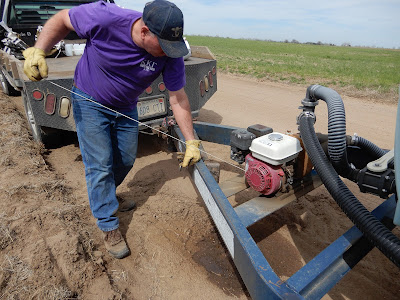 He runs the motor until the tanks are filled. (You can see it's only about one-third full in this photo.) 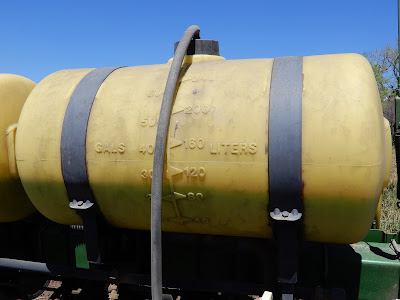 And then he's off to make another round. 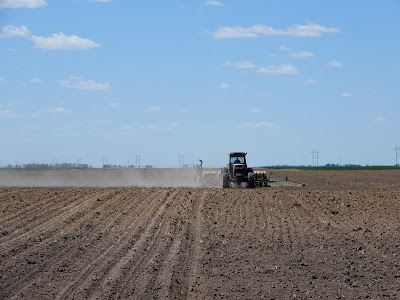 As always, we're "keepin'" it rural, just like our ancestors did. 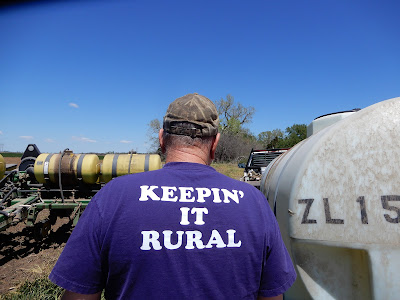 Corn was a primary crop in this area when it was settled. The 6th Biennial Report of the Kansas State Board of Agriculture of 1888 reported that corn was the main crop for Stafford County, covering 48,030 acres. Oats were grown on 10,849 acres, while the winter wheat crop totaled 8,717 acres. Pasture ground was tallied at 13,446 acres. Other crops in 1888 were millet, spring wheat, rye, Irish and sweet potatoes, sorghum, castor beans, cotton, flax, hemp, tobacco and broom corn. Swine outnumbered cattle in livestock. (Information taken from Stafford County History: 1870-1990.) 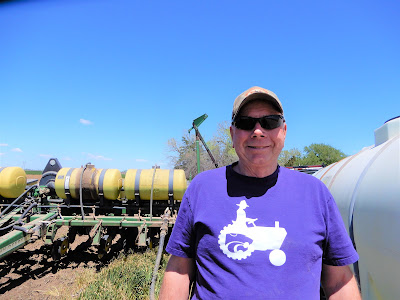 We got done planting our 294 acres of corn on Saturday evening. We still have a small food plot to plant as a custom farming job, but we are at a pause because of about 0.60" of rain we've received over the past two nights. We are thankful for the moisture.
Posted by Kim at 8:21 AM