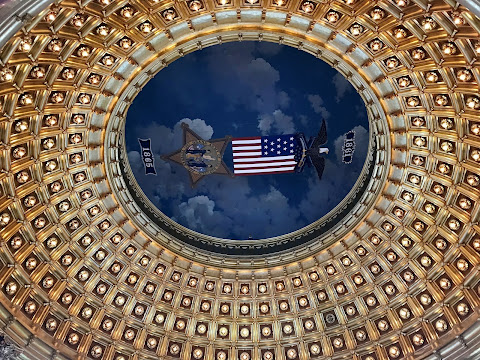 There's nothing like a 97-step climb up steep stairs to make you appreciate a view.

The Iowa State Capitol was one of the tour stops during the National Master Farm Homemakers convention in Des Moines.  I'm the current president of the Kansas chapter, so it was part of the job description to attend.

However, the trek to the top of the dome was optional. And, at first, I thought I'd skip that part.

But peer pressure is real - even among ladies of a certain age - so up the winding stairs I trekked. (Plus, Randy was going, too, and I didn't figure he'd take photos ... or wouldn't take photos to suit me.)

Ultimately (once I'd caught my breath), I was glad I made the hike.

The view was beautiful from bottom to top.

The Iowa State Capitol was fashioned in the influence of Renaissance Revival, which looks to 15th century Italy for inspiration. This was a common architectural style for public buildings in the 19th century. It is the only five-domed capitol in the country. 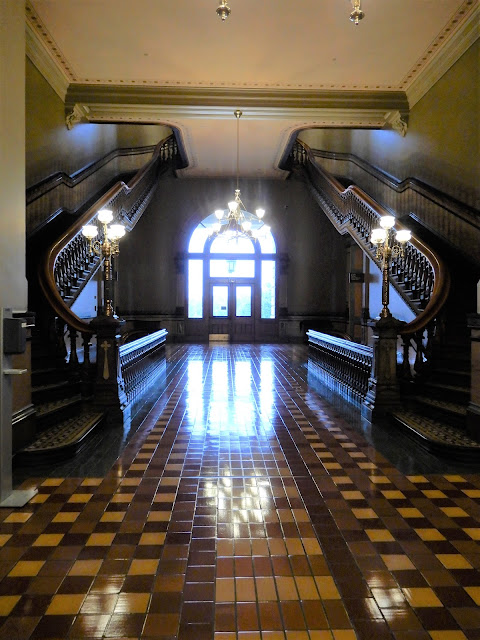 There's no shortage of fancy!

The staircase mural Westward (above) is a massive work that is “a symbolical presentation of the Pioneers led by the spirits of Civilization and Enlightenment to the conquest by cultivation of the Great West,” according to its artist Edwin H. Blashfield. 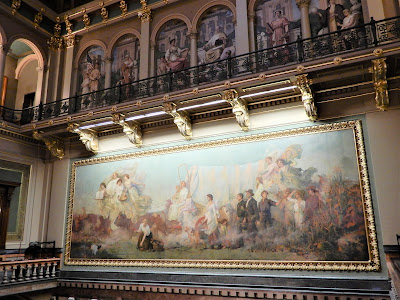 Directly above Westward is a series of six mosaic panels that depict Defense, Charities, the Executive, the Legislative, the Judiciary, and Education. (The one below is Defense.) 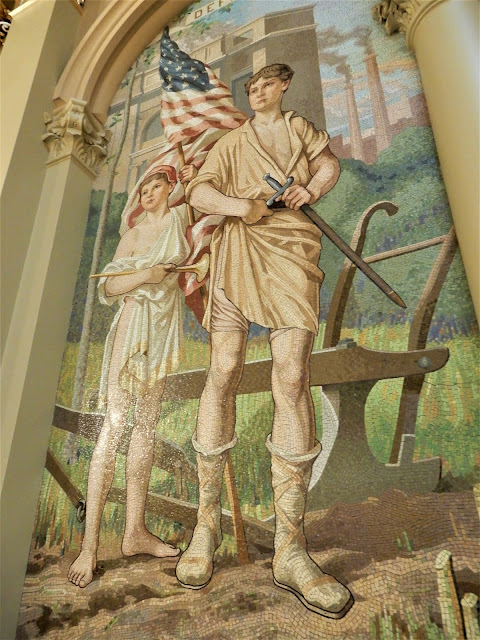 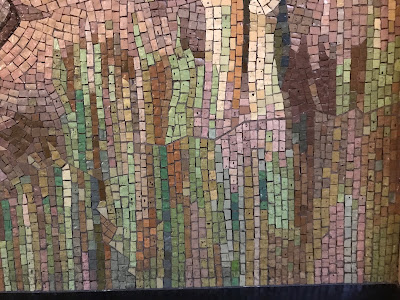 Above is a closeup of one of the mosaics. 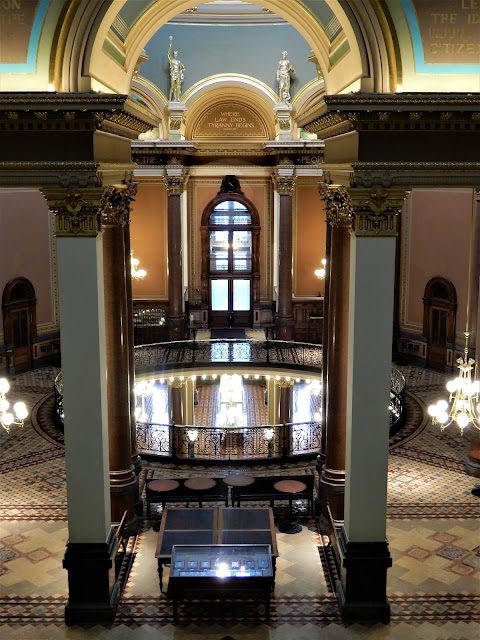 From that level, I looked across the way and saw a quote. 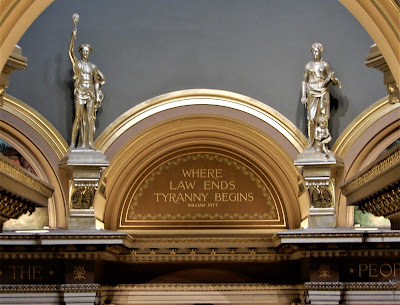 It was just one of many quotes that made me think that day - and since that day.

I love words (obviously) and quotes. These were words that the people of that time thought were important enough to etch into one of the most iconic buildings in their state.

While the tour guide at the Iowa Capitol building was telling us all about the USS Iowa model, I looked up and saw this quote stenciled there:

Nothing is politically right which is morally wrong.
Daniel O'Connell (1775 - 1847), an Irish politician 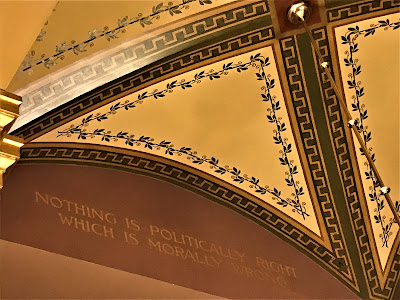 Politicians today could stand to have that included in their oath of office.

Other quotes stenciled onto walls or etched into plaques included:

Education is a better safeguard of liberty than a standing army.
Edward Everett, American statesman (1794 - 1865)
**
No free government, or the blessings of liberty, can be preserved to any people but by a firm adherence to justice, moderation, temperance, frugality, and virtue, and by a frequent recurrence to fundamental principles.
Patrick Henry, Founding Father (1736-1799)
**
Courageous confidence in the intelligence of the community is the sure sign of leadership and success.
G.W. Curtis, American writer
**
The ideal state – that in which an injury done to the least of its citizens is an injury done to all.
Solon, Greek philosopher

I couldn't help but think about those quotes again as I watched a Youtube video my sister, Darci, sent me last Saturday. It was about the Boatlift of 9-11, in which ferries, tugboats and private boats of all kinds and sizes came together to evacuate people from the island of Manhattan after the terrorist attacks.

Neither of us had ever heard about this endeavor. Compare it to Dunkirk, in which 339,000 British and French soldiers were evacuated in nine days during World War II. (There's been a movie made about that.) On 9-11, 500,000 people were rescued from Manhattan by boat in less than 9 hours.

I paused the video a few times and wrote down quotes from some of the heroes who responded that day. They didn't look much like heroes. One looked a little rough around the edges with missing teeth. Another didn't have the physique that we've come to associate with our super heroes.

But they were heroes nonetheless:

"You forget all about what you're supposed to do, what they teach you at school, and you say, 'You know what? Morally this is the right way to go and deep down, this is what I'm going to do.' "

"When the American people need to come together and pull together, they will do it."

"I believe everybody has a little hero in 'em. You gotta look in, and it's in there. It'll come out."

As we were leaving our Capitol tour, I snapped a quick photo of the Capitol from the outside - and marveled that just a short time before, I was up in that dome and that flying American flag was the one in my photo from there. 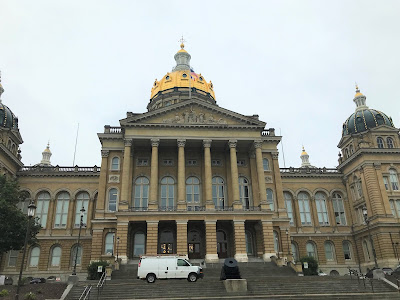 I wrote the bulk of this blog post on 9-11. I decided I needed to quit watching TV midway through the morning because it just made me so sad. As I worked on the blog post, I edited the photos and saw the American flag in several of them. I again read the quotes that I was so struck by during the tour. I had liked them enough that I'd paused to pull my camera away from the glittering chandeliers and the mosaic floors and the opulent furnishings to "click" the words with my camera shutter.

In a world - and country - that seems increasingly divided, I hope we can take those words to heart - the words immortalized on grand buildings - like the Iowa Capitol - and those uttered from everyday heroes - those people who answered the call on 9-11. 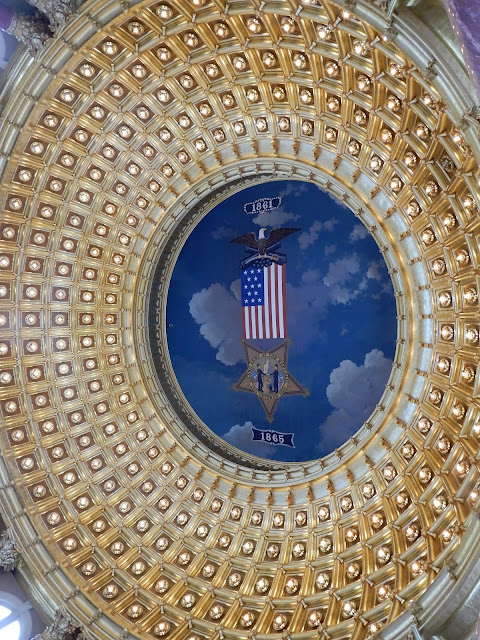 I know they are worth remembering for me.