Pretty on the Inside? 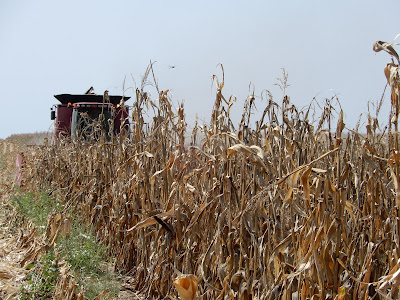 I think wheat fields are beautiful at pretty much every stage - from bright green sprout to those iconic "amber waves of grain" waving in the Kansas wind. 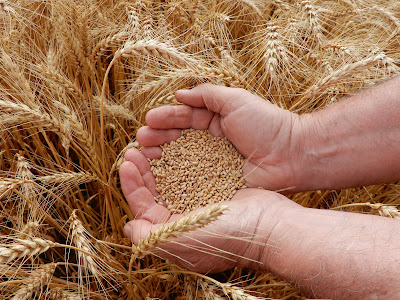 However, to me, corn is not a "looker" at harvest time. But we always hope it will be pretty on the inside. (I wrote about ugly corn syndrome in June. Evidently it didn't get a complex because it did OK in the end.) 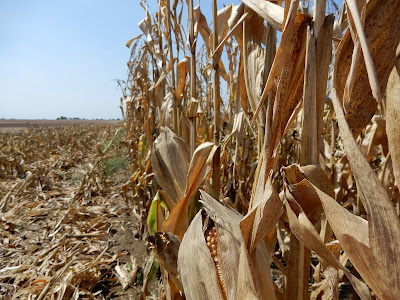 Last Friday, we completed our annual quest to discover the "inner beauty" of the crop.

We are relative newcomers to corn and have only had it in our crop rotation since 2013. (Randy has been producing alfalfa for 50 years and wheat for almost that long.) Our 99 bushels/acre 2021 corn crop was almost identical to the verdict last year:

We began corn harvest on Thursday, September 2. There was an abrupt pause the next day, when it was foggy and humid. Friday night (September 3), we got 3 inches of rain at our house, which stopped corn harvest in its tracks. While the corn was dry earlier, we couldn't get over the ground with the combine again until Wednesday, September 8. We stayed home from the K-State football home opener September 11 to cut corn. We had to be at the state fair on Tuesday, September 14, for Kansas Master Farmer and Farm Homemaker Day. As presidents of our respective branches of the organization, both of us had parts in the meeting and program. Then it rained that evening. 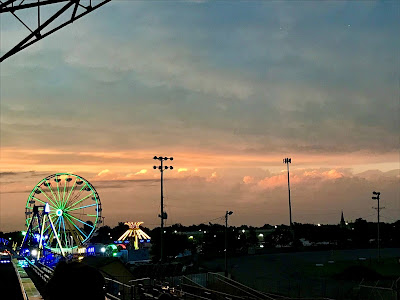 However, it was pretty from the grandstand as we watched the storm roll in. 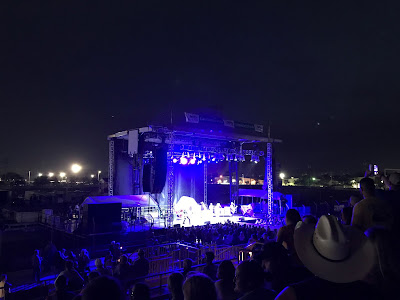 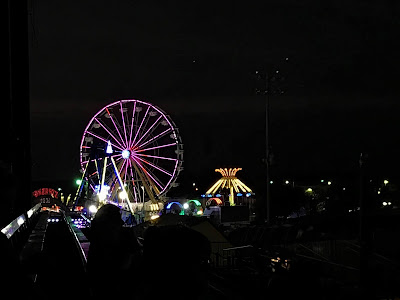 We made it through about 45 minutes of the Logan Mize concert before nearby lightning strikes shut down the music for awhile. (We drove home instead of waiting for Sawyer Brown. Looking at radar, we weren't sure the concert would continue, but it did.)

It took until Friday (September 17) for the ground to dry out out enough again for cutting. And we cut the last load of corn for 2021 that afternoon. 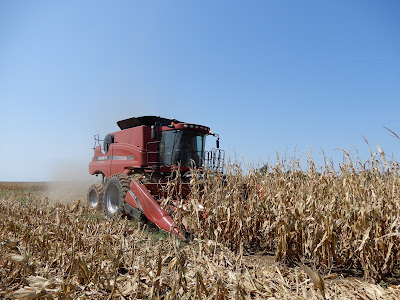 This spring, we planted 294 acres to dryland corn. (See the blog post about planting here. The corn was a lot higher than knee high on the 4th of July. And for photos on how it was looking later in July, click here.)

Our acres don't amount to much in the overall statistics of production for Kansas.

According to the Kansas Corn Commission, a third of our corn stays in Kansas to feed livestock; a third is made into ethanol and dried distillers grain at Kansas ethanol plants; and a third of our corn leaves Kansas to be used in other states or exported overseas, along with corn products.

Only five states produced more corn than Kansas in 2020. However, since our primary crop here on the County Line is wheat, we don't contribute much to the state's total. For us, corn is one of the crops used in our rotational program to keep soil quality good and weeds down. For my brother and parents in a neighboring county, corn is a primary crop. 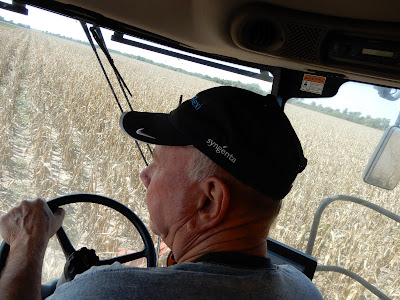 Whether it's wheat, corn or milo, Randy still likes being in the combine seat. And I like to go along for the ride. 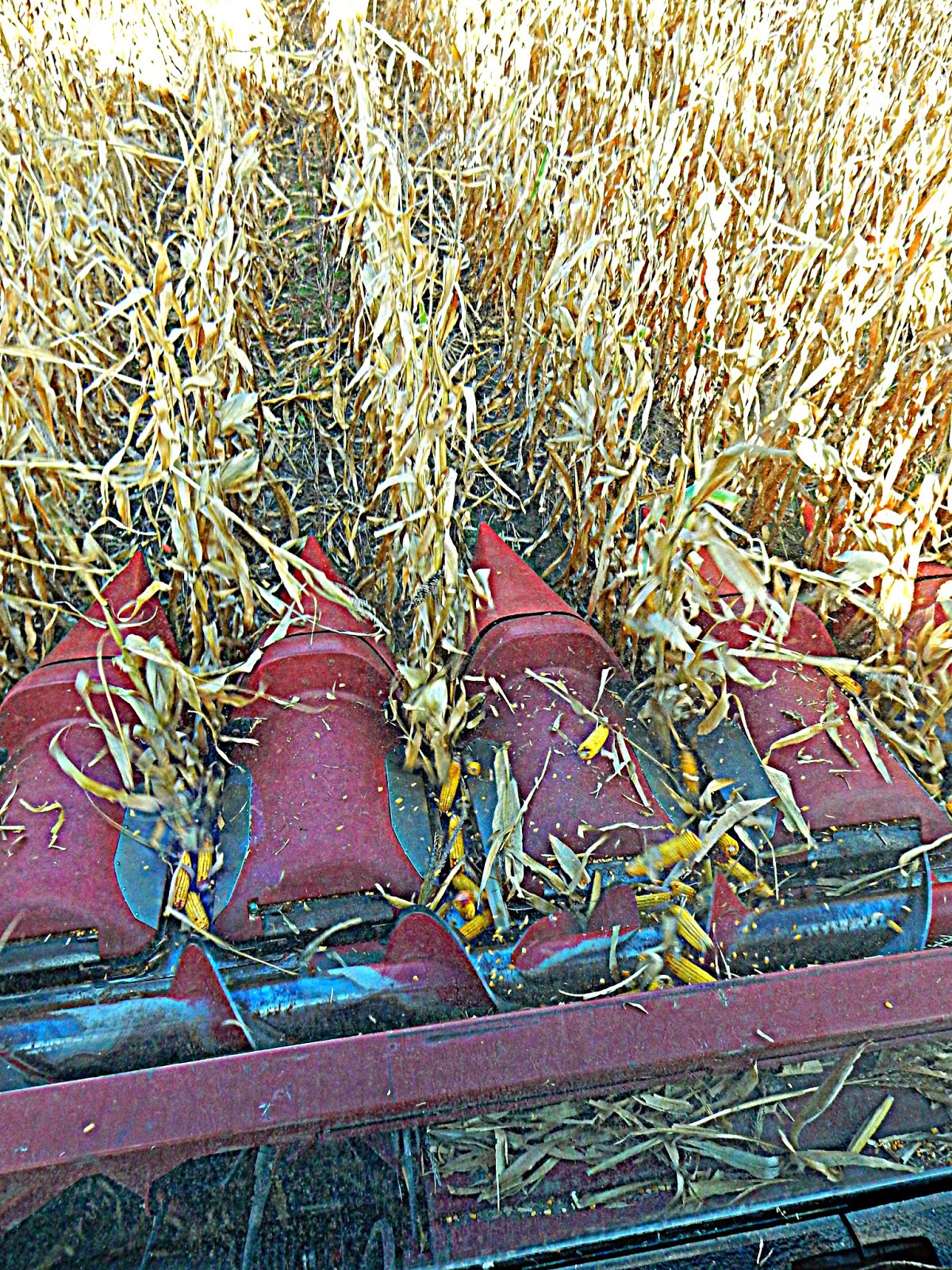 I think the dry corn cobs look a little like missiles as they get propelled into the header. The corn ears are pulled off the corn stalk and are dragged into the combine with rollers. Inside the combine, the corn kernels are separated from the husks and cobs. 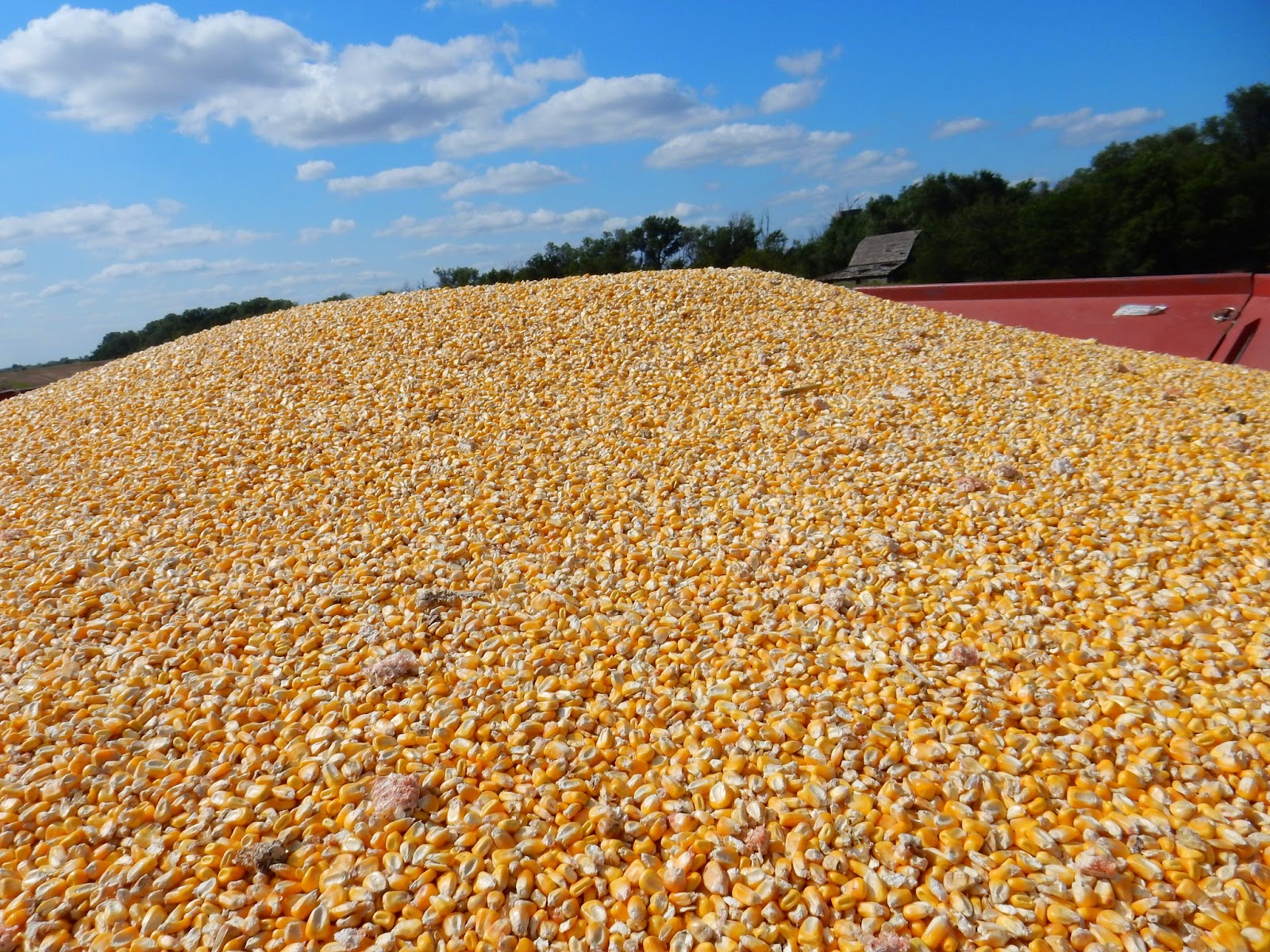 The cobs and debris are dispersed out the back of the combine. And the corn kernels go into the semi for a trip to the co-op elevator. 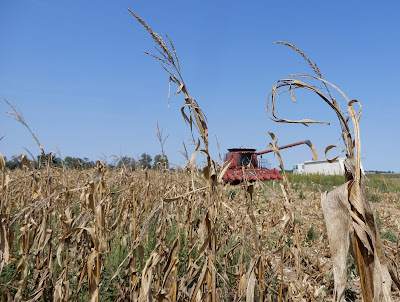 Many farmers have a grain cart pulled by a tractor to transfer the corn from the combine to the grain cart to the truck. 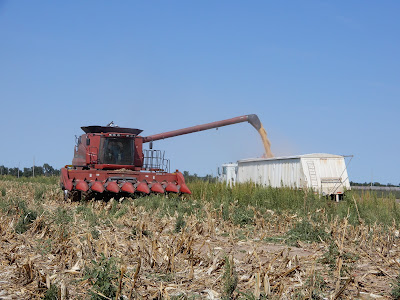 But we unload from the combine directly into the truck. 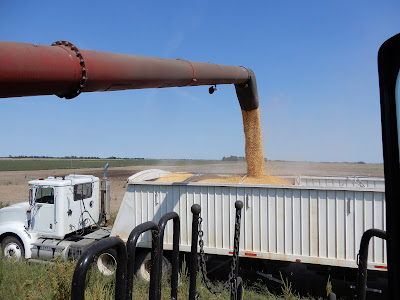 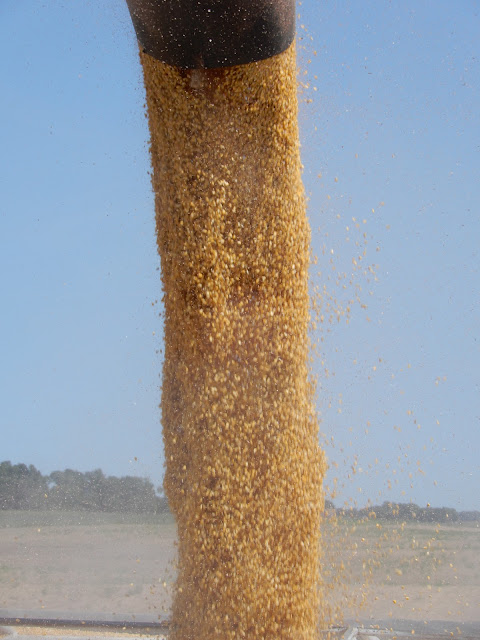 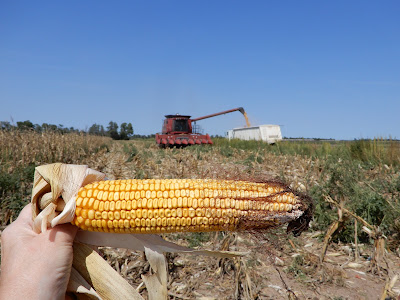 Here's a little video, but the combine cab window is kind of dusty. It's probably not particularly "pretty on the inside."

It's always good to have the sun set on another harvest season. 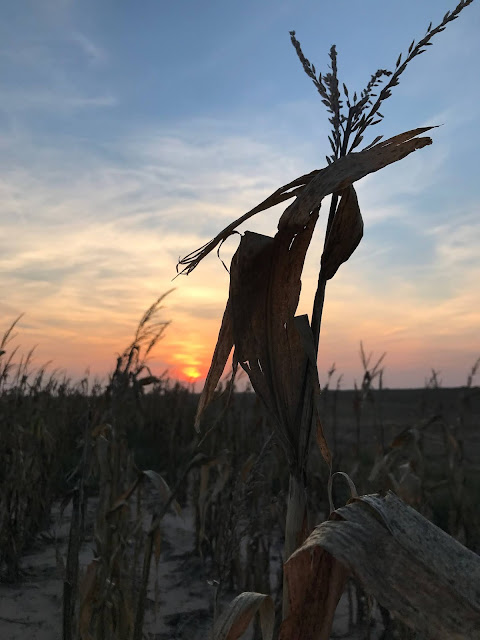 Unrelated to corn, we discovered that Randy's wheat entry in the Kansas State Fair wheat show had done well. He got second in one of the classes on his Bob Dole wheat variety. And the cycle continues: He began planting our 2022 crop on September 21, the final day of summer (at least, according to the calendar). 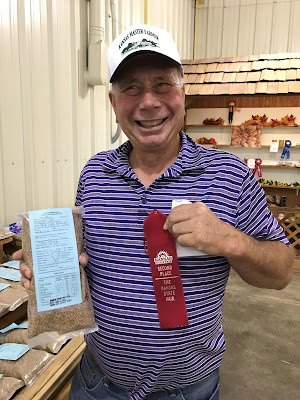