From Planting to Harvest: A Review in Photos

Back in September, during planting, I began documenting our 2022 wheat crop.

We began planting wheat on September 21, 2021, so I decided to use the 21st of every month to take a photo at the same location and post it to my blog and Facebook.

I patterned the concept after Hudson Cream Flour's Facebook page. ("Patterned" sounds better than "copied." Thanks for the idea, Tabra!) During the last growing season, Stafford County Flour Mills posted a monthly update on the wheat crop to its Facebook page. The mill - which is located in Hudson, Kansas, in our home county - produces Hudson Cream Flour. (It's the best flour there is, if you need a testimonial. They also have a Hudson Cream Flour Baking page on Facebook. Check it out, too!) They did similar reports in 2022.

I decided to take my photos on the same day, mainly so I'd remember each month.

My June 21st shot at the same location revealed a stubble field. We harvested that field during the first week of harvest. 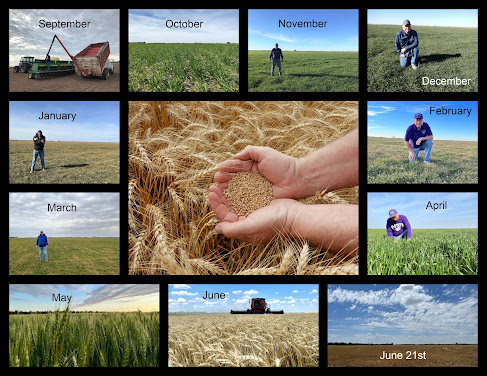 Here's a recap of the photos, without having to go back to each individual blog post. (Click on the photo collage to make it bigger.)

Since I always took the monthly photo on the 21st, it didn't reveal the whole story. Here's one from January 26, when we got a little snow on the crop. 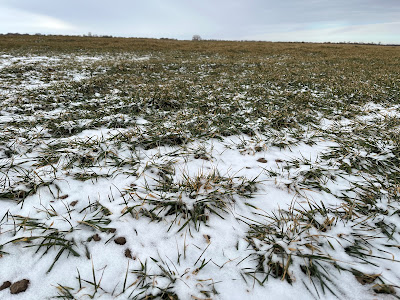 We began our harvest the evening of June 13, and we are about halfway done. We had a stretch of long, hot cutting days but were halted when we got 0.25" of rain Tuesday evening. It didn't dry off during the day yesterday, and we got another 1.10" last night.

During many of those days, we had clear blue skies, with no clouds. But, as an amateur photographer, you always hope for a little drama in the sky to offset that beautiful golden wheat. 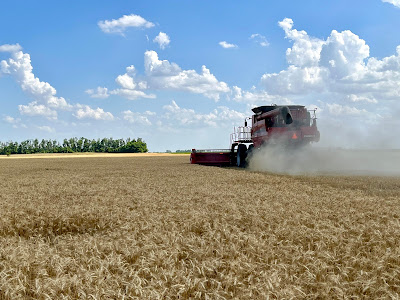 Father's Day provided some fluffy clouds for some photogenic shots. 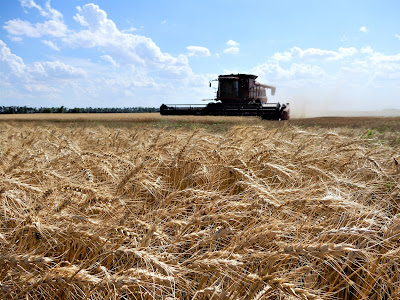 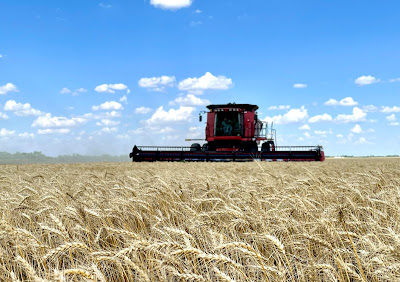 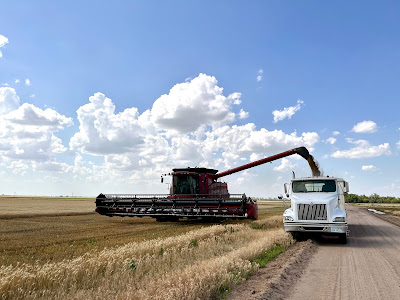 Speaking of photogenic, that storm that rolled through on Tuesday evening provided plenty of drama, including a rope cloud that I captured in a panoramic shot.

The sky provided a free show. A brief shower had moved through about 5:45 PM, dropping a few sprinkles, and then quickly moved on.

Still, the dramatic blue sky to the east was a startling contrast to the sunshine behind the weather system. It made for pretty photos as I delivered supper to the field. 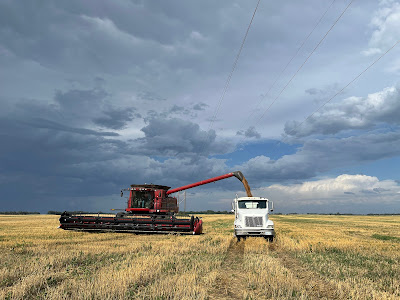 We thought that was the extent of the weather, but just 30 to 45 minutes later, another system rolled though. 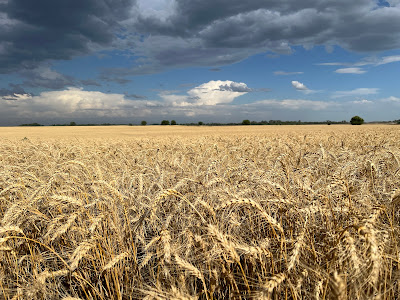 We watched as the rope cloud developed from the west/southwest. 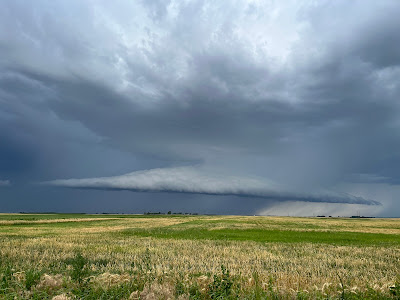 It constantly evolved as it moved across the plains. 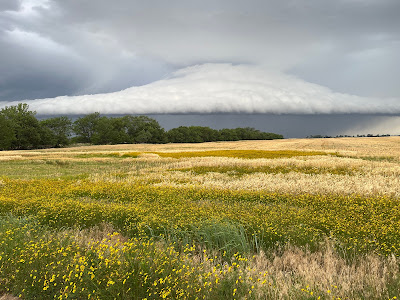 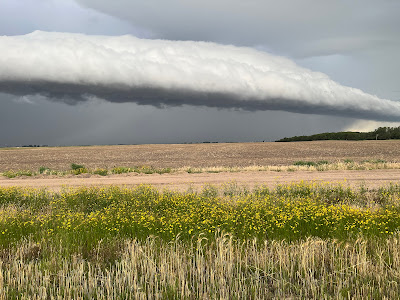 My final panoramic shot was just as the cloud was about to go over me. I made my way back to the car, and then Randy called from the combine to get picked up as the rain began to fall. There was quite a dust storm as I drove a mile over to pick him up.

After more than a week of hot harvest weather, it appears that we'll be dodging raindrops for awhile. We have a custom cutting crew scheduled to come and help us finish. We'll see when we close the chapter on Wheat Harvest 2022.