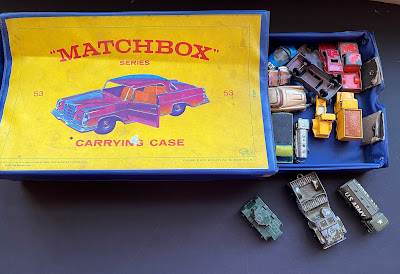 We cleaned out the attic this week, and one of the treasures we found was a stash of Randy's old Matchbox cars. 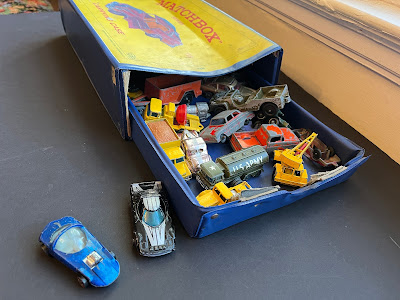 We hadn't unearthed the Matchbox cars in years, but there were lots of miles on those miniature cars and trucks, some of which dated back to Randy's childhood and still others that were added back in the 1980s and '90s by Brent. They were a fixture in Grandma Marie's toy box and didn't come home with us until we were cleaning out Melvin's and Marie's house. At that time, Brent was past the age for toy cars, so the cars were "garaged" in our attic. 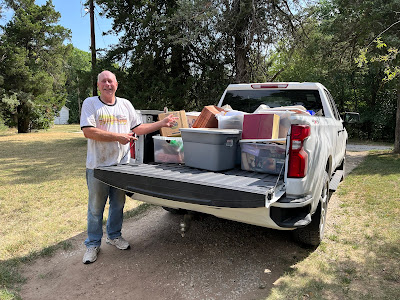 Even though we were carting a bunch of stuff from the attic to the trash dump, I couldn't let the Matchbox cars go - especially without showing them to the kids first. They'll be here this weekend for our farm retirement sale, scheduled for Saturday, August 13. (Click HERE for my blog on the sale. Here is a SALE BILL.)

As I looked through the box of cars, I couldn't help but think about the little boys whose hands rolled those vehicles over highway play mats and Matchbox race tracks. 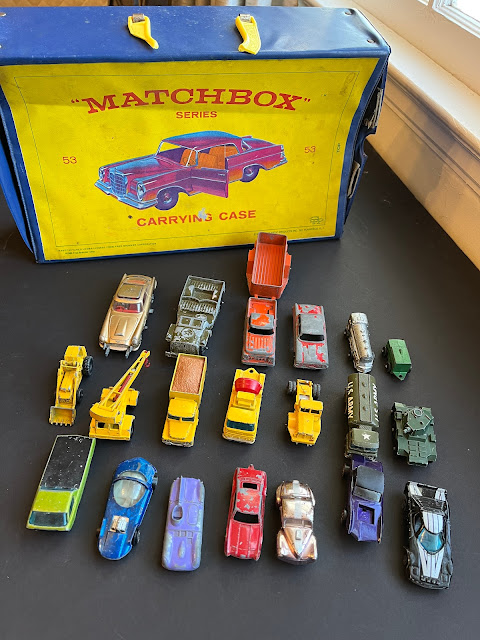 I lined up a bunch of the toys for a photo, and I saw the similarities between my miniature line-up and the neat rows at the farmstead that Randy has worked hard to organize in the last month or so for the farm sale. 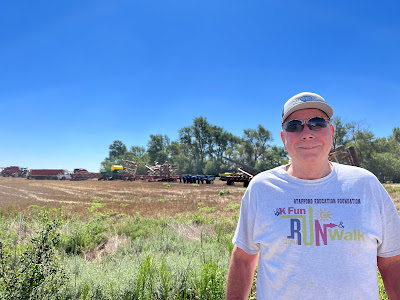 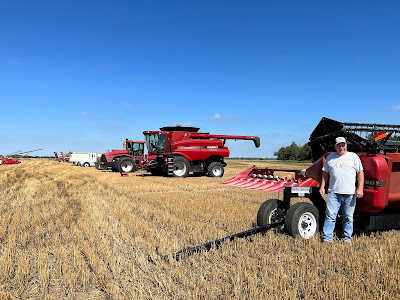 Now, Randy has another "toy." As the joke goes: It's bigger than a bread box ... or a Matchbox. It's a new-to-us John Deere Gator. 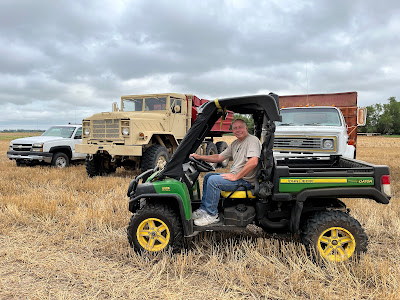 The Gator does look a little small when compared to the feed truck, which was designed on the chassis of an old Army truck. 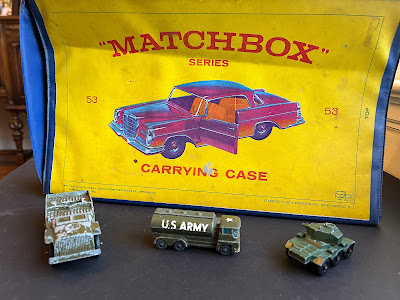 I just may have called the feed truck "a big boy toy" when it was added to the farm equipment back in 2012. (Ironically, I was the one that ended up driving it the majority of time during our final few years of farming. And Randy has relished telling potential buyers that his wife drove it for feeding.) 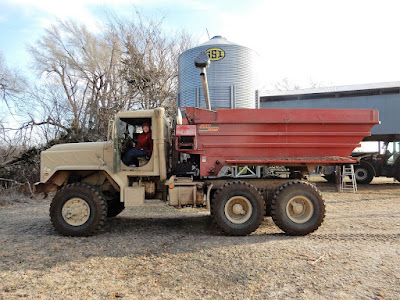 Still, I had to chuckle to myself that Army trucks made the cut all the way from Randy's childhood through his farming years - at least, in a manner of speaking. (His dad drove an Army truck in the Korean War, so there was that family connection, too.) 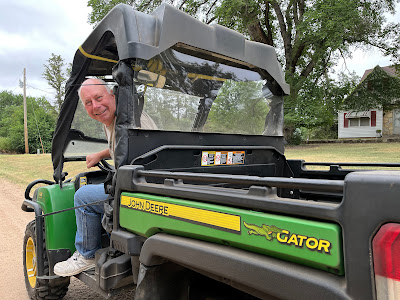 I didn't see the equivalent of a Gator in the Matchbox stash. But, a couple of weeks ago, we purchased the used Gator. We had been looking for about a year, but the pandemic disrupted the supply chain and availability on these kinds of vehicles, too, along with the scarcity of new and used passenger vehicles. 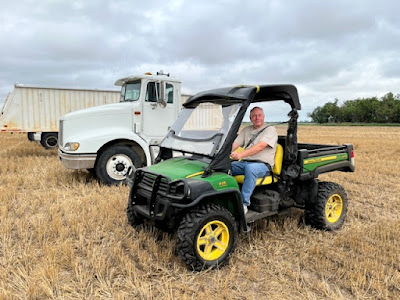 But, just like many things, connections are what makes the world go around. Jill and Eric told us that a Topeka friend was selling a Gator. 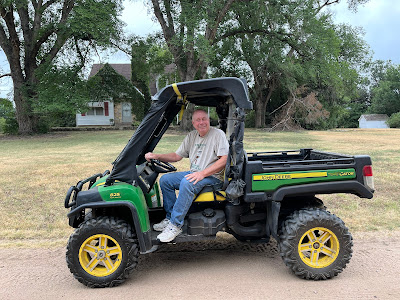 And, since our 4-wheelers are going on the auction block this Saturday, the time was right. 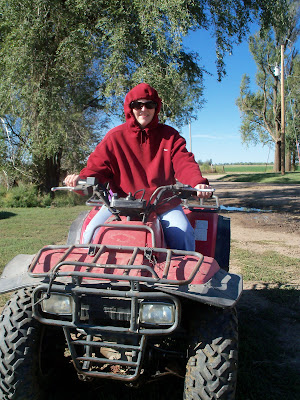 We decided that throwing our legs over the 4-wheelers might get more difficult in the coming years, so it was time to make a more accessible change. 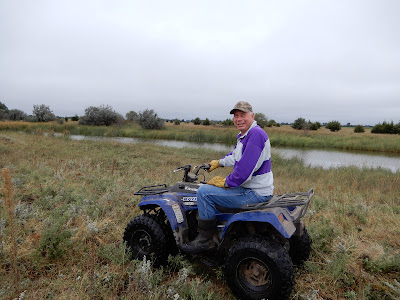 We agreed on terms, and the Gator came home with us. We'll use it for fishing trips around here (if it ever rains)  and other "running around excursions" that stay relatively close to home. Randy's already checked a pasture with it and has made several trips up and down the roads to the farmstead. 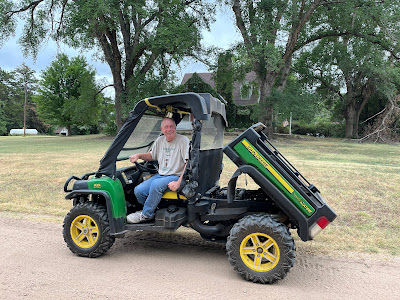 Boys love their toys - whether Matchbox size or Gator size or an XL farm feed truck. 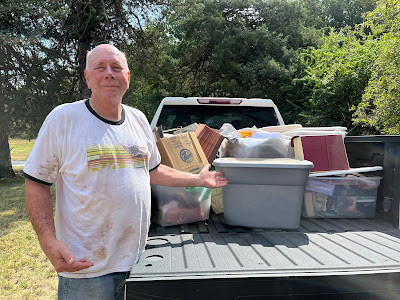 (Why did we clean out the attic on farm sale week? That's a good question. We used the only cooler day this week for the project. It happened to be Jill's and Eric's 13th wedding anniversary that day, so I texted the kids and said, "Happy 13th anniversary to Jill & Eric. And just happy day to Brent & Susan. Here's some stuff you won't have to haul out of the attic some day because we did it." By the way, I was dirty and sweaty, too, but I chose not to take a photo of that! We found that the attic was a little more drafty than we'd realized. The two major windstorms this winter and spring left quite a bit of dirt behind. Maybe this will give me a kick start to complete the decluttering process I began in earnest during the earlier days of Covid.)