I spent the weekend with all my kids. Sort of.

Kinley dialed up Brent on Skype Saturday night, so he was able to "join us" after he worked the Morehead State football game. We had all gotten texts from Brent mid-morning on Saturday, imposing an embargo on texts regarding the K-State/KU football game. He was DVRing it, and he didn't want any spoilers. As it turned out, it's pretty much impossible in this technological age to avoid scores of teams in the Top 10. (Not that any of us are complaining about the whole Top 10 thing!)

I also had an embargo of photos from the K-State football game. I took one blurry photo: 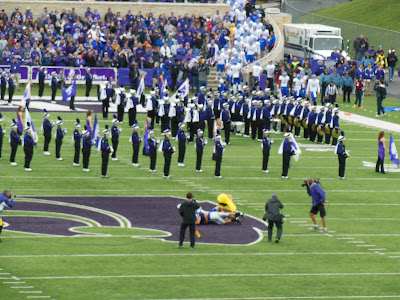 And then my camera said: "The battery is exhausted." I think the Jayhawk was exhausted after Willie's knockout punch at mid-field, too.

Thankfully, after the Wildcats warmed up, their battery was not exhausted. It must have been the cheering from home from this trio of Baby Wildcat fans that pushed the 'Cats on to victory.
It was a great K-State victory. (Yes, President Schulz. I said a K-State victory, 56-16.)
More to come from our weekend. It was a Willie good one.
Posted by Kim at 8:35 AM