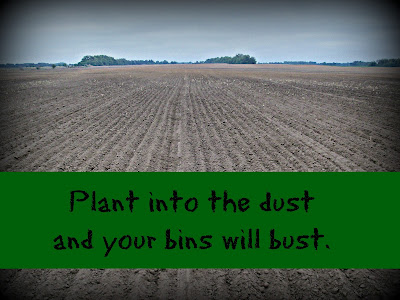 "Plant into the dust, and your bins will bust." I'd never heard the saying until I read it in The Hutchinson News last week.

I don't know whether it's an adage from The Farmer's Almanac or just wishful thinking from one of farm country's eternal optimists. But we are among the South Central Kansas farmers who are putting the old adage to the test again this year. 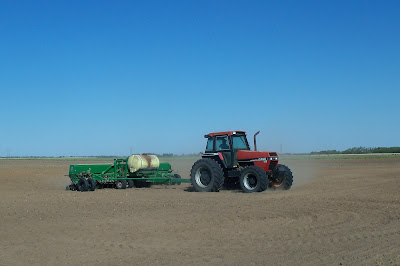 We started planting - (or sowing or drilling, depending on your terminology) - our 2013 wheat crop on September 21 and are still putting wheat in the ground. The chances for rain showers passed us by yet again, though we had several days of overcast skies that looked promising. I think we had two drops and a bug in the rain gauge after a brief shower Friday afternoon.

Randy says the dust is hanging in the air as he and our neighbors put the winter wheat crop in the ground. We are coming off our second straight year of drought conditions. 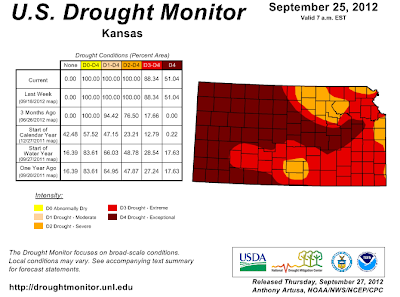 This summer has been the driest since 1936. At one point, three-quarters of the land area in the 48 contiguous states was experiencing drought conditions. As of last week, 20 percent of the country was still experiencing “extreme” or “exceptional” drought. Kansas is one of those places.

BUT, if you don't plant, you don't have a crop. That's for sure. So, we are planting. 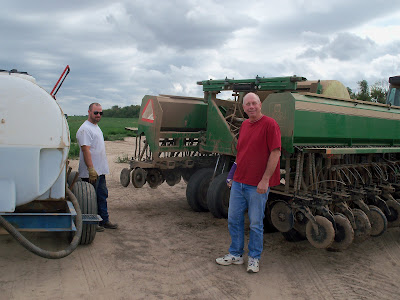 The roles have changed somewhat this year. Yes, I'm still the chief go-fer and chef. But, in an effort to keep Randy's purple-casted wrist out of the heavy lifting, Jake has done most of the planting this year. Randy has been driving the tractor with disc ahead of the drill.

So Jake has filled the drill with wheat ... 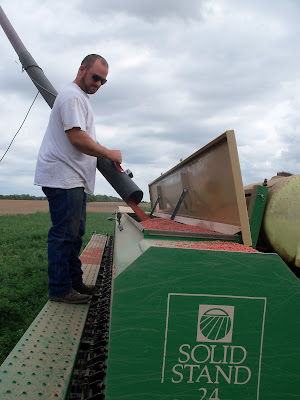 And he's added fertilizer to the tank on the back of the tractor from the nurse tank after Randy or I travel to the co-op for regular fill-ups. 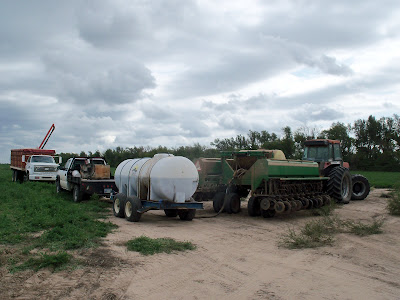 As with every planting season, I think about the optimism that seems to be part of the fabric of every farmer. They put a seed in the ground and then wait like a kid on Christmas morning. They slow down as they pass a planted field, just waiting for that first glimmer of green. And then the miracle begins again for yet another season.

Sow? What's up? Hopefully, some wheat will be coming up soon. And it would be ideal if while the wheat is coming up, a little rain would come down.

(For more detailed information about planting wheat, click here for my blog post from 2010. And, my blog title for last year was Dusting. Same song, second verse.
Posted by Kim at 7:21 AM