However, that's not to say that everything went perfectly smoothly as Dr. David Harder did pregnancy checks and vaccines on a small group of cows. Number 41 decided to try out for the high jump team and hurdled the wooden boards in the lane instead of patiently waiting for her turn with the veterinarian. I know that ob/gyn appointments aren't a favorite, but that was a little extreme. 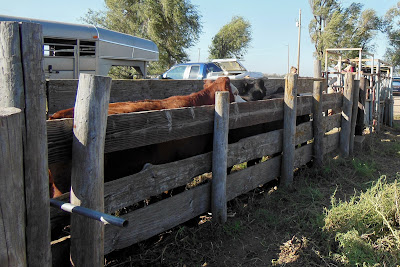 I wasn't fast enough to get the right gate shut to prevent her escape into the next pen. See how quickly you think with 1,200 pounds of cow racing toward you. Remember? The goal was to keep all important parts of the body intact and in working order. So I let her go.

But we rounded her up again. During the rodeo, I told Dr. Harder that it would be OK with me if Number 41 was not in the family way. If she wasn't, she would be on her way to the sale barn.

Nope. Not that lucky. She was 5 months along.

"She's a champion," Dr. Harder said with only a touch of sarcasm.

We aren't intentionally breeding cattle with Olympic high jump aspirations. That's not a genetic trait we are looking to perpetuate.
We left the bull for last. He wasn't thrilled to be visiting the doctor either. I must admit I'm a little more cautious after Randy's run-in four weeks ago. That purple cast might as well be a flashing neon sign to say, "Proceed with caution. This could be you."

Mr. Bull got his front legs over a higher barrier in the catch pen. I heard a crack as 1,800 pounds of bull leaned on the old wood. But it held. Dr. Harder and his assistant waved their arms and the bull decided to come down from his high horse and go down the lane.

You'll just have to take my word for it. While I'm never without my camera, it stayed in my fanny pack most of the morning. A rodeo is no place for a camera. That's especially true when one tried-and-true member of the crew isn't there. Randy was baling. With his right arm in a cast, he couldn't do his customary job running the chute anyway. So it was Jake, me, Dr. Harder and his assistant. The vet team did their normal jobs. Jake and I adjusted to the new game plan.

And no one ended up in the emergency room.  Success is relative.
Posted by Kim at 7:36 AM