My family didn't have anyone on the field at Morgantown, WV, on Saturday night. But the last time K-State played at Morgantown, my Grandpa, Shelby Neelly, was on the team. It was October 31, 1931.

My brother, Kent, posted a photo of the 1931 program on Facebook Saturday morning. I don't remember the story, but Kent says that Grandpa told about taking the train to Chicago, practicing at Soldier Field, and then traveling on to West Virginia, where they beat the Mountaineers, 19-0.
Unlike specialized players today, Grandpa played both offensive and defensive end, first lettering in 1927. After his second year at K-State Grandpa was forced to drop out because of financial concerns. He came back to Pratt County, and he shucked corn for his parents and for neighbors and planned to return to Manhattan the next fall. However, his parents needed money to pay off a farm debt, so he gave them the money and began saving again.

The K-State coaches called him, asking him to come back. He told them that if they could help him find a job at Manhattan, he would return. He began working at Manhattan's Wareham Hotel, where he earned his room and board by keeping the hotel's car clean and doing odd jobs for the hotel owners. He also cleaned for a bank to make extra money. He earned 25 cents an hour as an athletic trainer, wrapping athletes' ankles before practices and competitions.

Shelby returned to the K-State football team and letters in both 1931 and 1932. He also was the heavyweight intramural wrestling champion.
Grandpa bled purple. Or at least he painted with purple. On his farmstead, purple was the color of choice for an old outhouse, his barn, the chicken house and even the trim on his house. He also erected a purple metal building that's still in use today. (For more on the Neelly homestead, click here.) 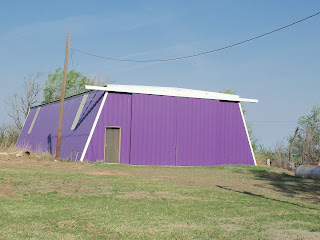 He went to K-State football games until he was 94 or 95 years old and was thrilled to be the Fan of the Game at a K-State women's basketball game in 2002. 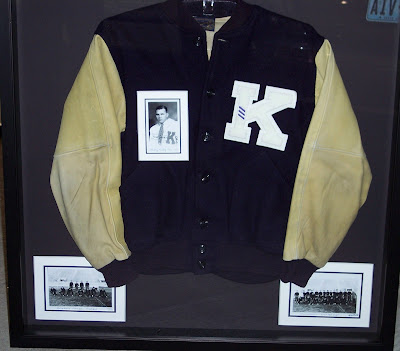 Saturday night, my parents were at the game and watched K-State again triumph over West Virginia, 81 years after my Grandpa stepped onto the field at Morgantown. Brent made the 4-hour drive from Morehead, Ky., to watch the 'Cats win. 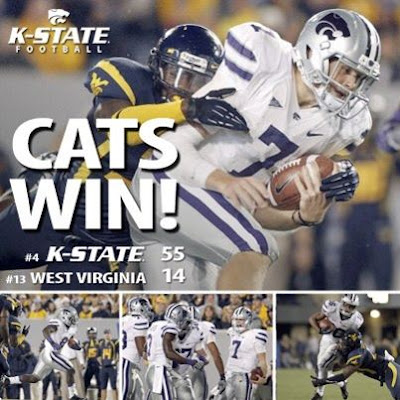 I'm looking forward to next weekend, when now No. 3 K-State takes on Texas Tech for homecoming. Go 'Cats! Purple runs deep in this family. EMAW!
Posted by Kim at 7:37 AM