If These Rings Could Talk 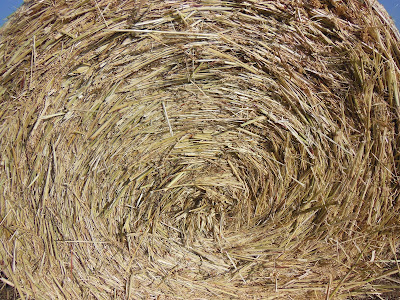 You know how you can tell how old a tree is by looking at the rings in the center? Well, if only the rings on this sudan bale could talk.

On second thought, maybe it's best if they don't have audio. Swathing sudan for ourselves and for a neighbor has had more drama than an episode of "Days of Our Lives." Oh, wait a minute! This literally has taken days of our lives.

Randy started trying to custom swath a sudan field for our neighbor last week. All it would do was ball up in front of the swather. Since he's a one-arm bandit at the moment, he was plenty frustrated, trying to fix the problem without all his appendages. Eventually, the Case repair guys came out and gave it a try. No luck. We had another neighbor try his swather on the same field. Still nothing.

The guys had a meeting of the minds. And it didn't even involve a coffee shop. They finally decided it was just too dry. The sudan stalk was so hard it wouldn't cut. 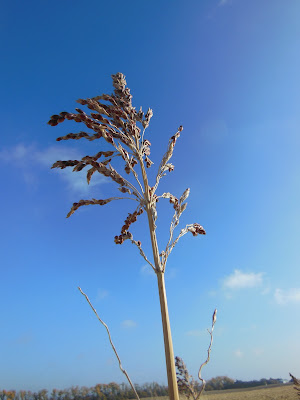 They arranged for another custom crew to come and give it a try with a draper header. But, since the custom harvesters were already booked with other jobs, they hadn't yet made their attempt.

Some foggy and overcast mornings finally came to our rescue. The moisture softened up the stalks. Randy started swathing about 10 Monday night and swathed into the early morning hours. Jake took over Tuesday morning and got all the fields swathed. It will likely take a week for the sudan to dry enough to bale. 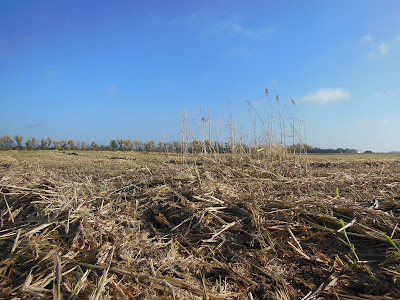 There is one bale from Randy's earlier attempts. It looks a little lonely out there. But, after some cussing and discussing, we're another step closer to having another feed source for our cattle this winter and so is our neighbor. 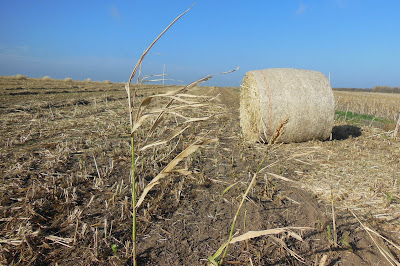 Click here for a step-by-step view of sudan harvest on The County Line. It's from 2010 when we had a bumper crop of sudan after timely rains. It's a little different than 2011 and 2012, both drought years.
Posted by Kim at 7:08 AM