Playing Tourist In Our Own Backyard 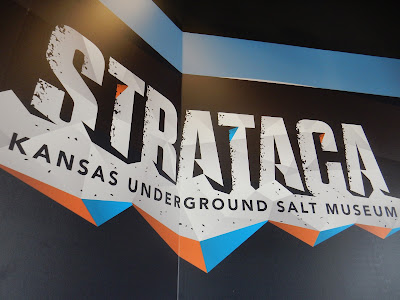 I suppose the people who live next door to Disney World don't spend months planning a trip there. Unlike we flatlanders, the people who live in the mountains aren't straining their eyes in the distance, trying to catch a faint glimpse of peaks through their windshield glass as they travel. 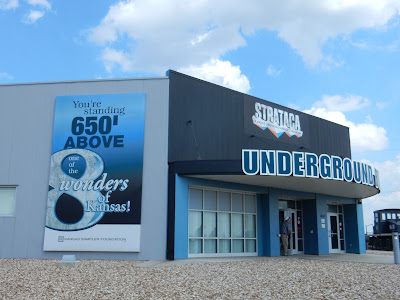 So I suppose it's not that unusual that I hadn't been in Strataca, the Kansas Underground Salt Museum, even though I live about 45 minutes away. But I got to play tourist in my own backyard during the National Master Farm Homemaker Guild's convention last week. I joined farm women and their guests from Colorado, Iowa, Kentucky and throughout Kansas for meetings, fellowship and, yes, even some sightseeing at two of the 8 wonders of Kansas located right in Hutchinson, Kansas, less than an hour's drive away from our farm.

Randy had been to Strataca - with my parents. We can't figure out why I didn't go at the same time, but I suppose I had some other obligation that day. 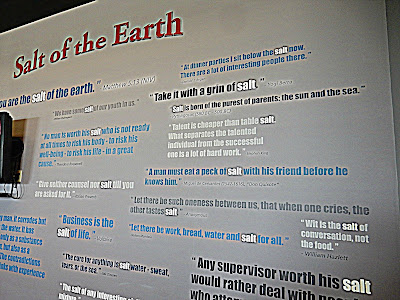 As someone who loves quotes, one of my favorite displays was in the lobby before we ever got to the real attraction. 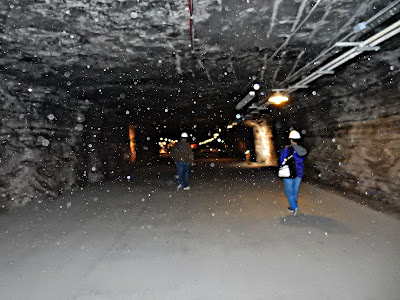 I have a tendency toward claustrophobia, but once you're out of the elevator, the underground salt mine is vast. There's no feeling of being closed in. Though you don't see the salt particles in the air, they show up in the flash of the camera. 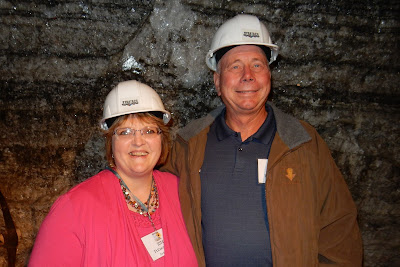 Don't we look like salt miners? OK, maybe not. 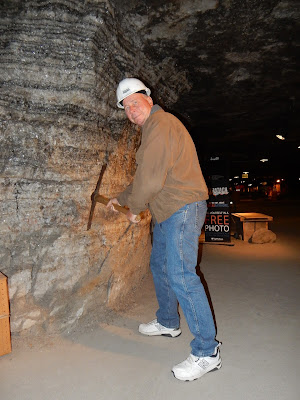 When we think of tourist attractions, we think of the St. Louis Arch, towering 630 feet above the ground or the Washington Monument stretching 555 feet into the sky. This museum is 650 feet below the ground. (The Statue of Liberty is 152 feet tall. Think about that when compared to the depth of the salt mine!) 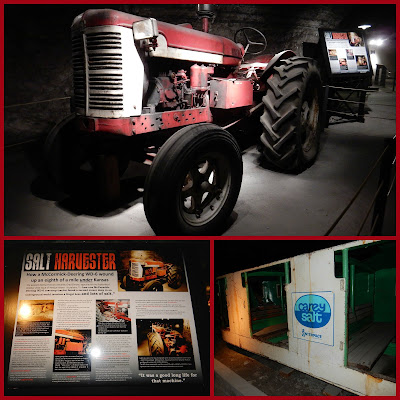 I'm guessing most of the farm visitors paused at the display of this old McCormick-Deering WD-6 tractor, wondering how and why it ended up 1/8 of a mile below any of Kansas' fertile farm ground. Once abandoned along a fence line, the tractor was given a long second career in the salt mine.

The museum is just a small part of the underground beneath Hutchinson, known as the Salt City. An early-day settler in the Central Kansas community discovered salt in 1887. The Permian Wellington Formation was formed about 275 million years ago when the Permian Sea dried up. One of the largest in the world, the extent of this bedded salt deposit is 27,000 square miles in central and south-central Kansas and is marginal to Permian Basin salt deposits in Oklahoma, the Texas Panhandle, and southeastern New Mexico that cover 100,000 square miles. 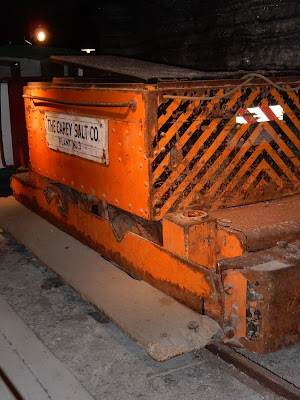 My farmer was most intrigued about how they get the machinery down to the mines. They literally have to break down the equipment, transport the pieces in the elevators and then put them back together once underground.

Besides salt production, the environment is perfect for underground storage, with its constant temperature and humidity. It's a lesson that was learned during World War II, when the Nazis hid artwork and valuables in the salt mines of Europe. It's the story told in the movie, The Monuments Men. 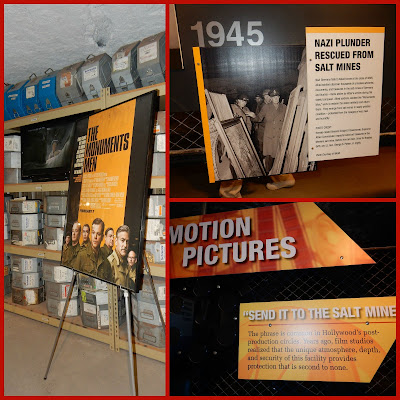 The motion picture industry stores props and film canisters under the earth in the middle of Kansas. 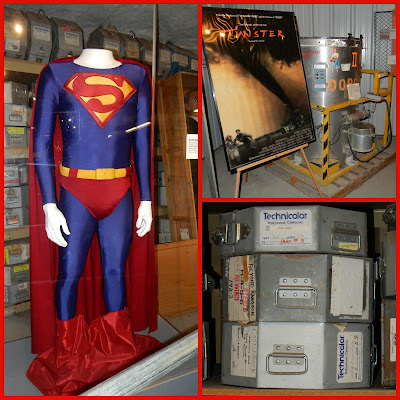 I have never heard of the movie, Salt, even though Angelina Jolie was in it. But it's kind of ironic that the film is stored in a salt mine, don't you think? 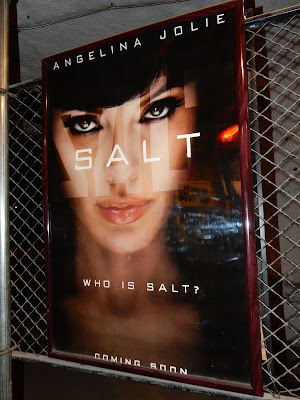 I had to take a picture of the boxes from Warner Brothers with the tapes from the television show, Friends, since I was touring the museum with my new farm friends from across the country. 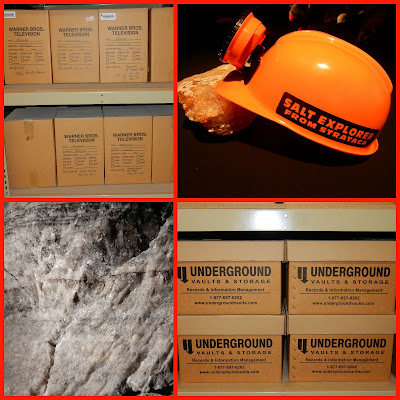 Underground Vault and Storage Company also stores business records and documents from around the world.

After our tour, we had Hog Wild Pit BBQ while down in the mine and also got to hear Larry Hatteberg, the long-time news anchor at KAKE-TV, talk about some of the "characters" he met while doing the popular video series, Hatteberg's People. He reminded us that everyone has a story. It's a truth I've also found as a reporter and writer. And sometimes the best stories aren't grabbed from the news headline, but rather, from ordinary people ... like the ones we met during the convention. 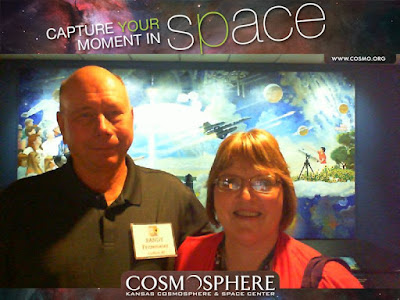 I had been to the Cosmosphere several times, but it had been awhile, so it was fun to play tourist there as well. 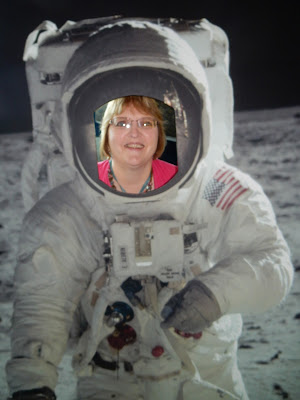 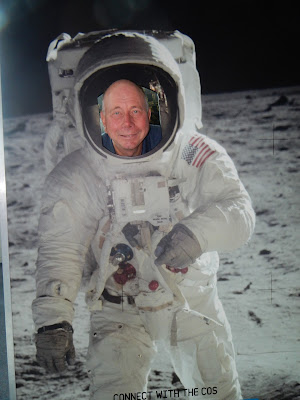 The Cosmosphere is another of the 8 Wonders of Kansas. Once our granddaughters get a little older, we'll have to make a return trip for adventures above and below the earth! After all, they are practically in our own backyard. 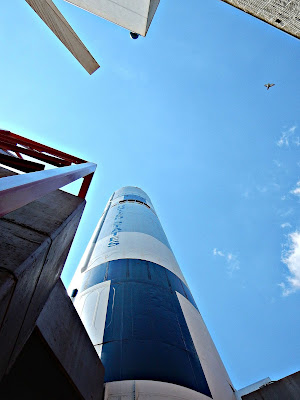