A Day Which Will Live In Infamy 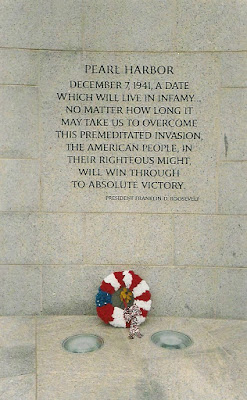 December 7, 1941:  It was a typical Sunday. Early church bells had just begun to ring. Some servicemen were still sleeping. Others were on their way to breakfast.

But the ordinary turned to extraordinary in just moments. On that Sunday morning, the first two waves of aircraft - about 180 planes - roared off the decks of Japanese carriers north of Oahu at 7:49 AM.
At 7:55, the quiet morning at Pearl Harbor was ripped apart when the first Japanese bombs dropped. Some Japanese aircraft swooped down on the harbor and Battleship Row. Others headed for nearby airfields, where American planes were lined up, wing-tip to wing-tip. Within minutes, the aircraft were reduced to useless heaps of torn and melting metal and the harbor was choked by black smoke and fire as mighty ships slipped toward the ocean floor.
A few minutes into the attack, a message was sent to the U.S. capitol: Air raid, Pearl Harbor - This is no drill! Pearl Harbor was pounded with bombs, torpedoes and bullets from 7:55 until 9:45 AM. As the Japanese planes roared away, they left 2,403 American officers and fighting men dead and another 1,178 wounded. Civilians were also caught in the crossfire of the surprise attack.

For most Kansans, it was just another typical Sunday. Many had gone to church and were relaxing with their families and friends after a big Sunday dinner on this day of rest. Many had been listening to the Sunday afternoon broadcast of the New York Philharmonic Orchestra when the first newsflash interrupted the programming.
President Franklin D. Roosevelt had hoped to keep America out of World War II. All that changed on December 7, 1941.
Today marks the 75th anniversary of the attacks on Pearl Harbor. In 2008, I interviewed about 20 servicemen and women who had served our country during World War II. The hours of interviews eventually led to a story that took up 24 pages - all single-spaced in a Word document - so I can't reproduce it here. The story was broken into a series of articles for the Wesley Towers Tapestry newsletter. All of those I interviewed were residents of the Hutchinson retirement facility. Many of them have since passed away. None of them were at Pearl Harbor, but several of them joined the service in response to the attack. 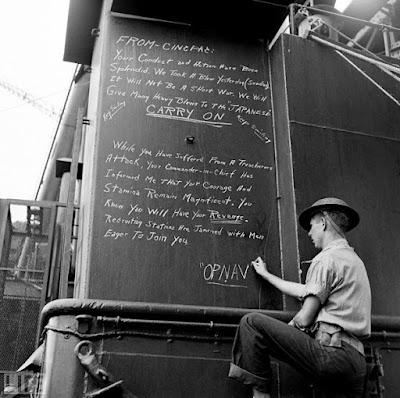 The interviews were some of the most moving stories I'd ever heard. They talked humbly and quietly about their service at Guadalcanal, the Island of Tarawa, the Aleutian Islands, Italy, at the Battle of the Bulge, the Battle of Leyte Gulf, the Battle of Okinawa and on ships in the Pacific. Two of the men actually saw the flag raised on Iwo Jima. Some served on bases on the homefront. One woman shared her experiences as the wife of a Prisoner of War. One woman served in the U.S. Cadet Nurse Corps, and another was a special services librarian. Those men and women who shared their stories represented all branches of the armed forces.

The commitment to serving the U.S. in this way has not waned for some. In recent years, Stafford has had several young men and women willing to serve our country. These were the kids I watched on the football field. I served some of them cupcakes at classroom Valentine's parties. They, too, grew up doing ordinary, everyday things in a small town in South Central Kansas. Yet today, they are doing extraordinary things to serve our country. It is their efforts - and the sacrifices made by their families left at home - who help us to continue as the land of the free.
Our little community is no different than others across the nation. Throughout U.S. history there has been an image of the farm boy putting down a hunting rifle to join the military. It was not until the turn of the 21st century that the data was available to document what many suspected – that rural America supplies more than its fair share of military recruits (Wessels Living History Farm - Nebraska).

On this 75th anniversary of "a day which will live in infamy," let us never forget. It's more than a page from a history book.


... Long may our land be bright
With freedom's holy light;
Protect us by Thy might,
Great God, our King.
Last Sunday, CBS Sunday morning featured several stories related to Pearl Harbor. Click on this link for one of them.
Posted by Kim at 7:20 AM