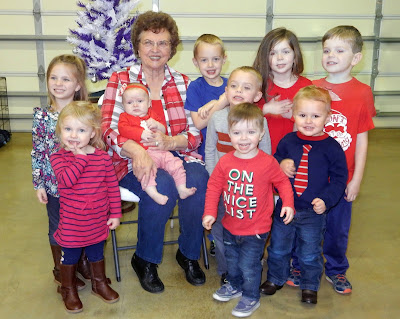 True confessions: I chopped off one head and substituted another to get the best expressions for all nine of these cuties. I don't have Photo Shop, so with my cheaper "photo fuse" feature, it probably won't hold up under scrutiny.

Tradition dictates that we attempt to take my Mom's Christmas Eve birthday photo with all the grandchildren and great-grandchildren. Last year, three of these models had to be wrangled by their mothers. This year, they were able to remain in the photo frame on their own. We take our progress where we can find it, folks!

Desperate times call for desperate measures ... AKA photo fuse. I had 13 frames of this crew on my camera. Since I wasn't the only one clicking away, I figure there are at least 50 versions of this photo residing on camera memory cards and smart phone photo galleries.

Photography of the kindergarten and preschool set is not for amateurs. Believe me, this amateur knows! 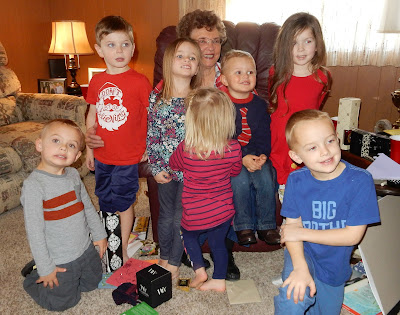 Exhibit B: Brooke is turned in a different direction, and we have a Frankenstein grin in this one. We should have positioned Big Brother back a little further so that he could be part of the group. But you know what? When you're talking nine children, aged 6 and younger, we're just lucky everyone was looking relatively acceptable in a frame or two. 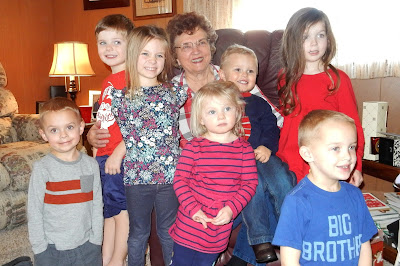 Actually, the baby was taking a nap during Grandma Moore's birthday present opening, so we were down one girl in this inside version of the annual great-grandchildren photo.

Our annual Christmas Eve birthday shot isn't going to make it onto a photo website, showing the "how-to" to create the perfect holiday image. It's not about photography's Rule of 1/3s or perfect lighting. It's about family - all the imperfections and all the chaos. The grandchildren have been taking the annual photo for years.

They've improved since the first one with all seven back in 1994. 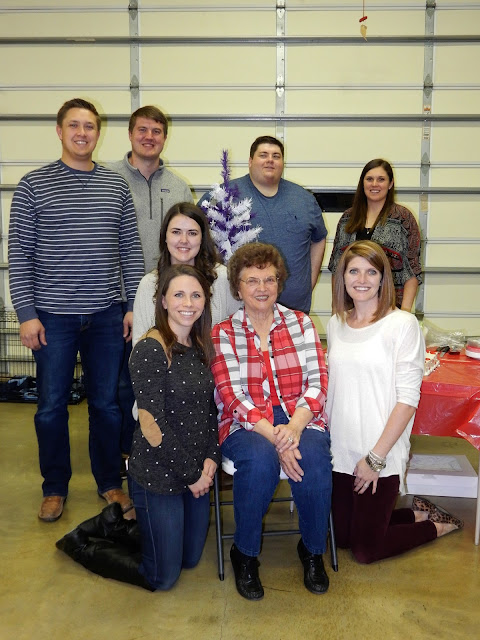 This year, we siblings also made the annual photo album. 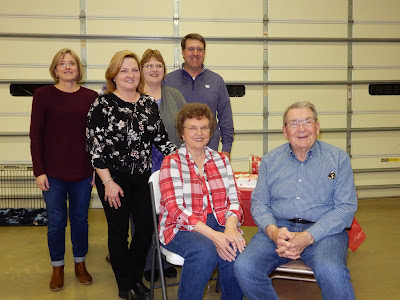 Our Moore family Christmas celebration is now up to 30 people, so this year, we moved the meal to a shed. It gave everyone a lot more elbow room. And, after Madison and her little helpers went around with a mini handheld sweeper following the meal, we realize it probably saved Mom's carpet, too. 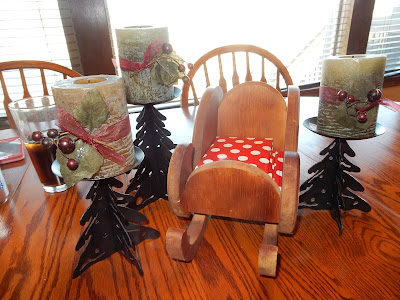 The Moore family Christmas isn't the only one with traditions. On Monday, Randy & I went to Rose Hill for a celebration with Randy's sister, Kathy, and family.

Kathy continues a tradition that their Mom began years ago. After Marie died, Kathy wanted the Christmas sleigh. Marie always used it for the Christmas centerpiece and filled it with small gifts for everyone at the table. Then, as the adults were cleaning up, the children could open their "sleigh gifts." They had to wait for the bigger presents until the dishwasher was loaded and all the pots and pans were drying by the sink.

I'm not sure Marie would think lottery tickets are a viable sleigh gift. However, I'm not complaining. I won $3 yesterday. The point isn't the gift anyway. It's gathering around the table. And I'm thankful that happens on both sides of the family. We may have a new family tradition after a rousing game of Scattergories. For the record, the team of Kathy and Amanda won. Amanda says it's all about picking the right partner. She doesn't know how true that is.
Posted by Kim at 8:30 AM