Replaced by a Drone? 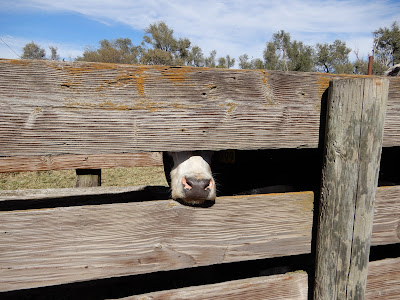 I couldn't resist clicking on a link yesterday that said, "Cargill develops industry-first robotic cattle driver." It probably had something to do with this reminder of our latest cattle adventure: 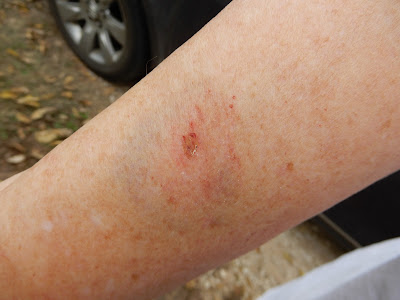 Though it's a little hard to see, I have a fairly sizable bruise on my arm. It was my own darn fault. I stuck my arm where I shouldn't have. It's one of those things you do and wish you hadn't.

It's not a big deal - a little broken skin and a tender arm is much better than anything broken. And it also points out my abundance of sunspots. Let's call them that rather than age spots, shall we? (Randy heard me say "ouch," but I don't think the other guys even knew anything had happened. I'm quite proud of that.)

With only that minor hiccup, we got our first round of cattle work done this fall Monday during our rain-imposed hiatus from wheat planting and milo harvesting.

Anyway ... I'm thinking one of those robotic cattle drivers would be quite the addition to the old farmstead after reading the article in Farm Journal's Ag Tech:


Improving animal welfare and employee safety—that’s the top two goals driving the creation of the industry’s first robotic cattle mover. Cargill says the robots are designed to move cattle from holding pens to the harvest area at processing plants, reducing stress to the animals by minimizing their proximity to human activity. Employees operate the robots from a catwalk above the holding pens. This also helps improve worker safety.

The machine uses automated arms, blowers and audio recordings to move cattle in a desired direction, and can operate in rain, snow, or mud with no delay in daily operations. Testing was conducted at Cargill’s Wyalusing, Penn., and Schuyler, Neb., beef processing facilities. The robotics are being implemented at Cargill Protein beef plants in the U.S. and Canada.

At any rate, it's not coming to the County Line any time soon, so I guess Randy will have to put up with his clumsy cattle helper instead. 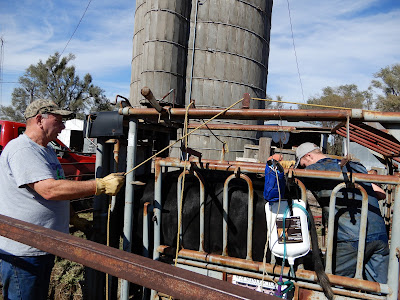 The non-clumsy worker was Dr. Bruce Figger with South Wind Animal Health. He preg-checked 25 heifers, as well as vaccinating and applying a dewormer to the "ladies" and one bull.

Yes, Dr. Figger got the glamorous job on the "business end" of the heifer. With an internal exam, he determines how far along the young moms are. Bulls arrived in these ladies' pasture in July, so they could be 6 months pregnant by now. Most were in the 5- to 6-month gestation stage. A few were a little "later to the party" and were about 4 months gestation. They will be the first in our County Line maternity ward to deliver the Class of 2019, beginning in late January and February.

Now if those "young ladies" were your teenage daughters, that would be good news. As it is, they will become the meat in our freezer next spring. 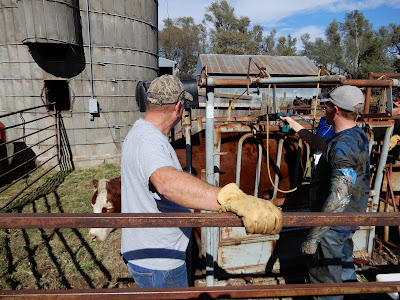 After the exam, Dr. Figger applied a deworming solution to control parasites like worms, lice and liver flukes. 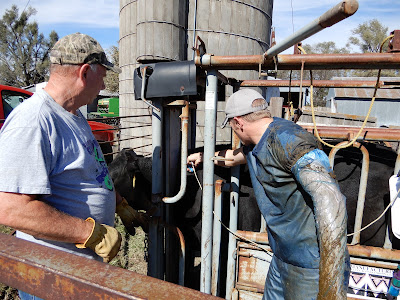 He also gave each pregnant heifer a shot of Virus Shield 6 that prevents leptospiriosis and BVD. Leptospiriosis is an bacterial infection that may cause abortion or stillbirth. BVD stands for Bovine Viral Diarrhea - 'nuff said. The pregnant heifers also got a shot of Scour Bos. The vaccination helps prevent scours (diarrhea) in their babies. Cattlemen want to produce healthy cattle. It's better for the cattle, and it's also better for the bottom line. Just like we gave recommended vaccinations to our children, we believe it's important to give our cattle every medical advantage to have a healthy life. 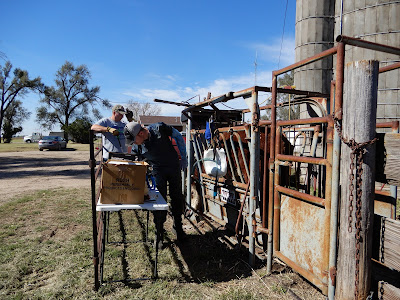 You remember those little pink vaccination books our parents used to keep track of our vaccinations as kids? Dr. Figger also made notes on each heifer, recording her eartag number, her gestation, the medicines she received and a body condition score.

The chute didn't work perfectly during this first round of cattle work, so Shawn did some repair work on it yesterday while Randy planted wheat. However, with 0.80" of rain overnight and this morning, we are AGAIN at a standstill.

True confessions: I had a blog post all ready with beautiful photos of sunrises and fall colors. But I just wasn't feeling it this morning after another round of rain.  We'll save that for a more optimistic day.
Posted by Kim at 8:25 AM